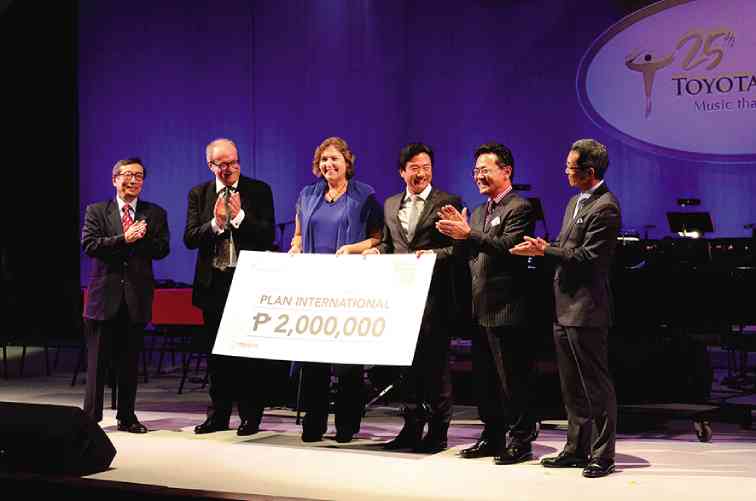 The 25th Toyota Classics concert at the Cultural Center of the Philippines tried to be true to its theme “Music that moves life” by raising funds for the rehabilitation of Visayas provinces hit by Typhoon “Yolanda.”

Highlight was the Covent Garden Soloists Orchestra conducted by Miguel Angel Navarro, with Pamela Tan-Nicholson on the piano and Vasko Vassilev on violin.

Familiar movie scores from “The Wild, Wild West;” “The Good, the Bad and the Ugly” and “The Magnificent Seven” made the concert very audience-friendly.

Nicholson and Vassile played in tight rapport with the highly expressive orchestra.

Escalante and Ong forged a duo and sang a medley of songs from the stage musical “Phantom of the Opera.”

She intoned a husky tone in the low register that somehow showed a heavy rather than a light sheen. As she scaled the higher register, however, her voice sparkled with lyrical splendor.

Ong was breathy on the low register, as the low notes were beyond the bright tenor texture of his vocal instrument. At the end, the duo elicited a warm applause.

During intermission, Jose Ariel Arias, senior vice president of Toyota Motor Philippines, hosted a brief awarding of the check facsimile to the concert’s beneficiary, Plan International Philippines, a charity working for the relief of typhoon victims in the Visayas.

The second movement of Rachmaninov’s second piano concerto, with Tan-Nicholson on the piano, was an absorbing tour de force. The pianist infused her playing with adequate warmth, ardently essaying the dialogue with the orchestra to ensure pleasurable listening.

Vassilev’s playing of the “Meditation from Thais” was another moment of poignant listening. There was meditative silence as the audience savored Vassilev’s singing tones that truly tugged the heart. Nicholson played with equal verve on the piano.