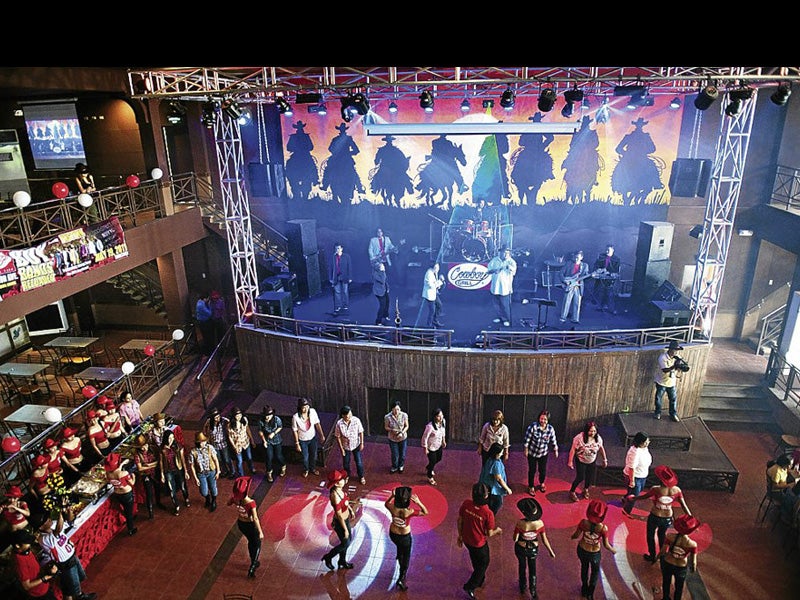 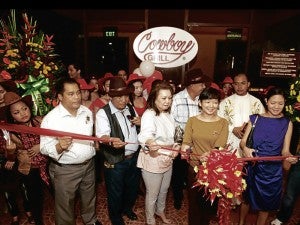 For patrons of the franchise, the newest addition comes as no surprise. The Q-Ave branch is familiarly yellow trimmed with reddish shingles, complimented with red and orange accents and lots of woodwork, each decorative element coming together for that cozy Country-Western atmosphere – minus the guns, of course.

With its roomy interior and choice of decoration, Cowboy Grill multi-functions as a family restaurant, a party place and a resto-bar.

“We do welcome everybody,” said operations manager Solomon Caasi Jr.

At 6 p.m., when the restaurant opens, majority of the clients are families and younger diners that later shifts to employees enjoying meals after work.

“After midnight, they’re more of bar employees,” added Caasi, until the closing hour of 6 a.m.

Unlike other resto-bars, added marketing manager Ruel Padilla, there is no entrance fee at Cowboy Grill.

“Even when we have events, they can come in,” he said.

Cowboy Grill Q-Ave officially opened on May 15 with Harlene Bautista, Quezon City Mayor Herbert Bautista’s sister, as special guest for the ribbon-cutting. The day-long activities closed with a special “Achy Breaky Heart” line-dancing number by the waiters and guests and a fireworks display at night.

Cowboy Grill’s menu is decidedly local with a sprinkling of “foreign” comfort food like onion rings and nachos. Sisig, the house specialty, is still a must-try.

“Our sisig is the most popular dish,” said Padilla. “It’s cooked in the traditional Kapampangan way – grilled, not fried.”

Its offerings are diverse, from steaks and crispy pata to veggie sticks and “sizzling [squid] tentacles.” Apart from the obvious beers, the place also provides a variety of cocktails.

But while the menu is quite like that of many local and Filipino-style eateries, Cowboy Grill isn’t exactly the typical resto-bar either.

“It’s a little classier,” said Caasi. There’s a strict no-sando, no-slipper-wearing policy, though he jokes that the line is crossed if the customer is wearing imported brands like Havaianas and Crocs.

Entertainment is also nonstop. Bands start playing as early as 6:30 p.m. without pause. Every night, three bands perform at different sets, and dancing is allowed. The bands alternate among the five Cowboy Grill branches. 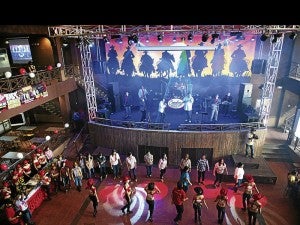 To anyone who frequents Quezon Avenue, Cowboy Grill used to be a Shakey’s Pizza branch – a sister company of the resto-bar. The building was remodeled for Cowboy Grill, which the owners believe complements the area better.

All branches launched a special anniversary promo last May 19. Prizes include motorcycles, iPads and cell phones, said Caasi. A raffle ticket is earned for every P500 purchase, and individual Cowboy Grill branches draw winners every two weeks from May 27. A Chery car is up for grabs for the final draw.