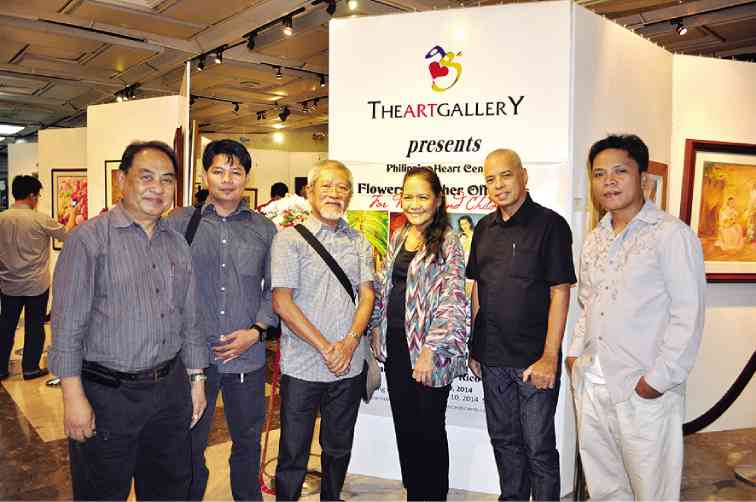 Art enthusiast and collector Dr. Orestes “Resty” Monzon, of the Philippine Heart Center, chanced upon a painting of a Mother and Child in a mall exhibit and could not take his eyes off it.

He started conversing with it, believing that talking with an artwork would foster a kind of intimacy. It becomes yours, if figuratively, he says. He ended up buying and bringing it home on his third visit.

Four years later, Monzon, a physician-radiologist, met Domingo “Domeng” Labordo, who had painted that “Mother and Child.” He told the artist he would organize an exhibit of his (Labordo’s) paintings.

On Nov. 10, the exhibit of Labordo’s paintings was opened. Other works on exhibit are pieces by sculptor Moralde “Ral” Arrogante and Tanay artists Angelito “Jo” Florendo, Ismael Mataverde, Rico Tica and Emer Gellido.

Held at the Philippine Heart Center’s Art Gallery, “Mga Bulaklak atbp.—Alay kay Nanay at sa Kanyang Anak” (Flowers and Other Offerings to Women and Children) will run until Nov. 28.

Born in Buhi, Camarine Sur, Labordo started painting in his primary school days. He was a self-supporting student at Mabini College.

For three years since 1965, he worked as a painter of giant billboards for movie ads. His most unforgettable was for Cecil B. DeMille’s “The Ten Commandments.”

In 1974, he went to Jeddah, Saudi Arabia, where for 15 years he honed his skills in advertising arts, photography and art production.

In 1990, Labordo decided to be a full-time visual artist. He participated in dozens of exhibits and won awards, including First Prize at Studio Art.com; Grand Prize at “Kulay sa Tubig” of Genesis Gallery at SM Megamall in 2004; and its Second Runner-up in 2006.

As a realist-impressionist painter, he specializes in portraiture, landscape, flowers and still life in watercolor, pastel, oil and mixed media.

His mantra is quoted from Henry Ward Beecher: “Every artist dips his brush in his own soul, and paints his own nature into his pictures.”

Also exhibiting at this time is Arrogante, he of the recycled-brass fame.

An active ecological artist in the organization called EarthArt, Arrogante uses only crimping and fastening tools, and no welding or gluing in his recycled brass and copper.

Also in this exhibit are works of Tanay artists such as Florendo, whose last show featured 12 medicinal plants approved by the Department of Health.

Mataverde and Tica, both Tanay self-taught artists, specialize in flowers and still life. UP-bred Gellido of Jalajala, Rizal, has antique churches and houses as subjects.

From medicine to art

What drives a medical doctor like Monzon to organize an art exhibit?

“We have met young, old, known and struggling artists in art galleries, and found a common love for humanity,” he says. “That’s how I learned to appreciate their works. There’s a story behind every painting, reflecting the artist’s life.”

Monzon says the exhibit sought to give tribute to the role of woman and maternity.

The exhibit will close with a unique activity called “25 Paintings for 25 Winners,” where paintings will be raffled off to 25 donors to the Maningning Miclat Art Foundation.

Monzon first organized a similar activity in 2012 during his 65th birthday. Beneficiary then was Fr. James McTavish of Verbum Dei. He organized a second raffle of paintings in 2013 to benefit Fr. Nonette Legaspi and his ministry of people with disabilities.

“This year,” Monzon says, “we thought of organizing such activity for the Maningning Miclat Art Foundation, where I am a new trustee, to support its mission of honoring young poets and artists.”