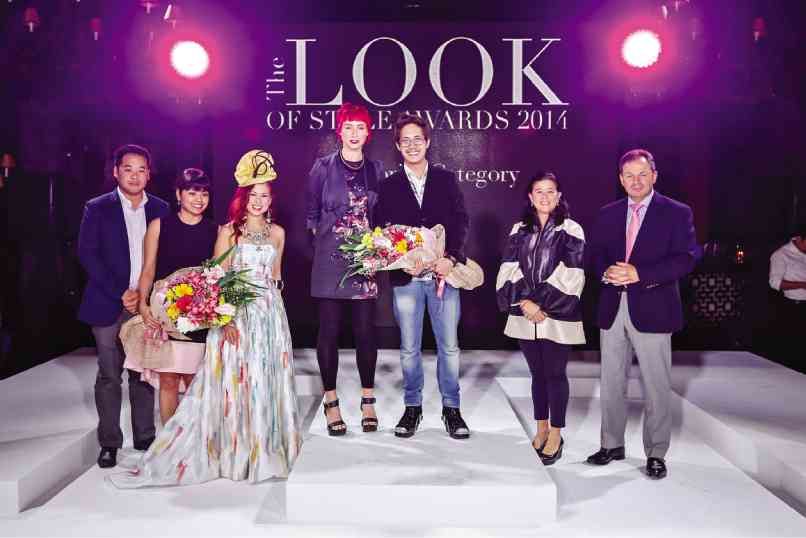 A newbie designer from Bulacan who cuts and sews her own clothes, and an architecture graduate-turned-shoe designer from Baguio, won the 2014 Look of Style Awards recently held at Buddha Bar in Makati.

Organized by Inquirer Lifestyle and Look Magazine in partnership with the British Council of the Philippines, the annual Look of Style Awards is now on its fifth year.

Known to beauty pageant fans as the designer behind former Miss Philippines Shamcey Supsup’s bridal and reception shoes, Nere Ku, 36, edged out four other colleagues in the accessories division.

The design contest has a national scope. Prior to the finals, Carmencita Sioson and Stef Cabal of Look Magazine, with some of the country’s leading fashion and accessories designers as judges, did a series of go-sees in Davao, Cebu and Manila to screen and select finalists.

As part of their prizes, Romero and Ku will each receive an all-expense-paid trip to United Kingdom courtesy of British Council, and enroll in one of the short design courses offered at London College of Contemporary Arts.

They will also get to exhibit their winning pieces in the school’s gallery space, a venue frequented by movers and shakers in London’s fashion industry.

The two winners will also get valuable business mentoring advice from the country’s top fashion industry professionals in such areas as business planning and marketing.

They also earned for themselves coveted slots in Inquirer Lifestyle’s next Face-Off fashion show later this month at Solaire Resort and Casino in Parañaque.

“I just graduated last year,” said an emotional Romero. “I have a handful of clients, but I don’t even have a shop yet! I do everything, from sourcing and pattern-making to cutting and sewing. My mother and a friend help me.”

For the first time in the contest’s history, a woman won the top prize. Romero is also probably one of Look of Style’s youngest winners.

Past winners in the apparel division were Pablo Cabahug, Geof Gonzales, Roland Alzate and Rei Escario. Except for Gonzales, Cabahug and company presented a capsule collection of their clothes before this year’s winners were announced.

Through their pieces, past winners showed how they’ve evolved as designers after their studies in London. Romero is raring to follow in their footsteps.

“Lahat sila kabog! (Everyone was so good!),” she said of her rivals. “In fact, I was crying yesterday. After seeing the other entries, I told my mother to start lowering her expectations. Waley na! (I’m finished!) This win was so unexpected.”

Like her fellow contestants, Romero was asked to give the maria clara a contemporary twist through a three-piece collection that best showed her aesthetics and skills as a budding designer.

For her three looks, Romero used “low-maintenance and wash-and-wear” materials consisting of ink blue and neutral-colored fabrics made of satinized cotton twill and linen.

She also collaborated with embroiderers from Pandi, Bulacan, to have certain ecru pieces embroidered.

The maria clara theme was captured in the sleeves of Romero’s first look, an embroidered dress inspired by the traditional overlapping panuelo.

“I drew inspiration from old family photos of men and women I downloaded from the Internet,” said Romero. “Since I’m fond of feminine designs with a tough edge, I thought of combining feminine and masculine touches in one look.”

This quality was most evident in her second look—a multi-piece ensemble featuring a pair of pants partially covered in the thigh area by an unfinished pleated skirt.

For her third number, Romero did a pants-and-tunic ensemble that combined structured and flowing elements in the form of a tailored blazer over loose tunic.

“In a way, following a certain theme was restricting,” she said. “Part of the challenge was being mindful of the theme while incorporating it into your own design aesthetics.”

Designer JC Buendia, one of the judges in the apparel division, was impressed with Romero’s cutting technique.

“Viña’s collection reminded me of Romeo Gigli’s work,” he said.

“She was able to present a cohesive line without duplication of look and redundant repetition of prints and textures,” said Tan Gan. “Most aspiring designers focus on volume to gain stage presence. In contrast, Viña’s tunic was fluid. It takes confidence for a beginner to use softer fabrics.”

If they were to pick a runner-up, Tan Gan and Buendia, in separate interviews, chose Jinggo Inoncillo, who used neoprene, silk alaskin, perforated nylon and honeycomb organza to create an all-pink collection of dresses and separates.

“I see Jinggo’s clothes being worn by today’s Maria Claras,” said Buendia. “I like the fact that he interpreted the classic solihiya weave in different applications. He should make it his own the way Chanel used quilting and camellias, and McQueen, skulls.”

She also lauded the fact that as judges, they hardly saw the traditional maria clara channeled in the contestants’ works.

“It was a good sign,” she said. “It means we have moved forward as designers by not being too literal, but by just having the maria clara as a historical reference. The theme helped draw out today’s Filipino design sensibilities.”

It was the same dilemma that initially confronted Ku when he began working on his entry. In the end, he produced two pairs of women’s platform sandals-cum-gladiator boots made of leather, woven banig, beaded applique, hardware and metallic spangles.

Both pairs dubbed as the abaniko (fan) and payneta (comb) shoes have detachable components that cover the leg area, which can be joined together and turned into a bag and a maria clara jacket.

“Drawing inspiration from such a theme was pretty challenging,” said Ku, who started designing shoes full time three years ago. “When we hear the words maria clara, the first thing that comes to our minds is the bakya.”

Ku decided to showcase his talent by combining three of the most common concepts tackled by almost every shoe designer: the sophisticate, party and bridal.

“The main challenge was how to incorporate all three into one look,” he said. “That was when I thought of coming up with detachable and convertible pieces that form the sleeves and vest of a maria clara jacket.”

Bag designer Amina Aranaz-Alunan, one of the judges in the accessories division, gave Ku credit for seriously considering the maria clara theme.

The other judges in the accessories division were jewelry designer Joyce Makitalo, accessories and shoe designer Emi Jorge, Lim, Ritchie and Regalado.

“He created transformable shoes and accessories not simply for the sake of wowing the audience,” said Alunan. “He did it because it was essential in his story and in telling and interpreting the theme. By doing so, he displayed a well-developed thought process with each piece, which shows his ability to think conceptually and succeed as a designer.”

Compared to other designers, Ku, in Alunan’s scorecard, had a very strong and unique point of view. He also won points for cleverly executing the maria clara theme.

Ku, in a separate interview, also felt the same. “I consider Em Mariano as my toughest competition because of his unique style and taste level,” said the University of St. Louis graduate. “Through his work, I readily saw his potential as a great jewelry designer. Not only were they detailed and intricate, he cleverly used and mixed unconventional materials with more common ones like gold and gems.”

Mariano didn’t go home empty-handed, as he won the SM Accessories Award, a special prize handed out by the accessories brand of the country’s leading mall chain, for “representing Filipino craftsmanship and the edginess of fashion accessories.”

Apart from SM Accessories, the 2014 Look of Style Awards was also presented by Hana Shampoo, Champion Infinity and the London College of Contemporary Arts.

The School of Fashion Design and the Arts (SoFA), which Alunan co-founded, also handed a scholarship to jewelry designer Meme Dakay, one of this year’s finalists in the accessories division.