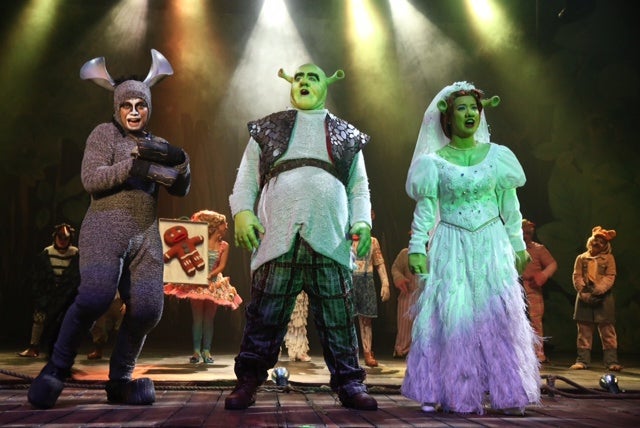 A scene from Atlantis Productions’ “Shrek the Musical”. CONTRIBUTED PHOTO

‘Shrek the Musical’ returns for holiday run on Dec. 26 to Jan. 4

MANILA, Philippines—It’s time to Shrek-the-halls, as everyone’s favorite green ogre returns in time for the holiday season when “Shrek the Musical” stomps back into town for a very limited repeat run from December 26, 2014—January 4, 2015 at the Meralco Theatre.

“Shrek The Musical” puts a twist on fairytales as we have come to know them. Instead of a knight riding a noble steed, the hero is Shrek, a swamp-dwelling ogre who befriends a wisecracking Donkey.

And the Princess? She’s the slightly temperamental and neurotic Fiona. After Shrek rescues Fiona from a dragon-guarded tower, the two fall in love before she reveals there’s more to her than meets the eye.

Other fairytale misfits join the madcap adventure in this colorful musical including a brave puppet named Pinocchio, a Gingerbread Man with an attitude and Three Blind Mice who channel their inner Dreamgirls.

This entertaining, family-friendly show features a terrific score including the hit song “I’m A Believer!”

The songs come from Jeanine Tesori, who wrote the music, and David Lindsay-Abaire, who wrote the book and lyrics. It recently had an acclaimed sell out run in Manila.

“Shrek the Musical” also draws from a 1990 children’s book by famed New Yorker cartoonist William Steig. Like the first 2001 Shrek film, the musical stays true to Steig’s fractured fairytale vision where dragons are friendly, swamps are better than castles, and the true hero isn’t handsome or noble but a grouchy-on-the-outside, tender-on-the-inside ogre who is more or less content with himself and his life in a swamp.

After “Shrek the Musical” premiered in 2008, as the most expensive show ever produced on Broadway, it played for more than a year and earned numerous Tony and Drama Desk Award nominations. It went on to become a hit musical in London’s West End and continues to tour the UK.

Directed by Bobby Garcia, “Shrek” is the perfect musical for the entire family this holiday season.

The anti-Disney ogre has become a tad too square

Shrek The Musical’: ‘It’s very funny; the energy is 150 percent’