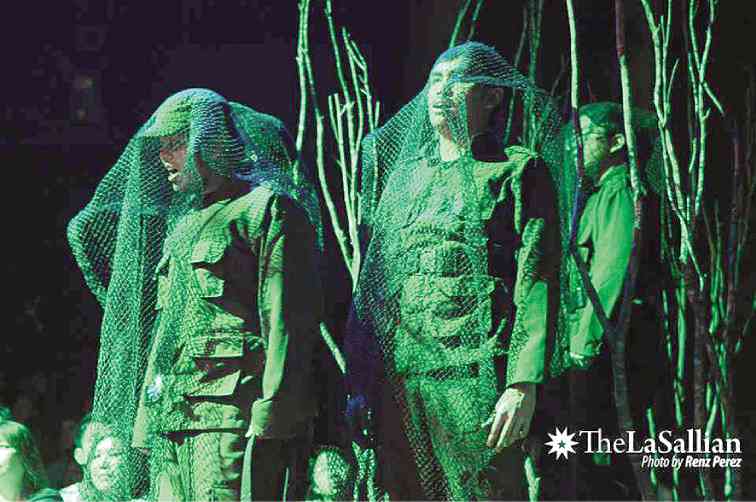 ‘Fish-Hair Woman’ on stage as poetic as the novel

The De La Salle University (DLSU) Harlequin Theatre Guild’s adaptation of Merlinda Bobis’ “Fish-Hair Woman,” which had its second restaging since it was first showcased in March, proved to be just as poetic as the novel. The show, directed by Raffy Tejada, ran November 19-22 at the Teresa Yuchengco Auditorium, DLSU.

In the story, Estrella (played by Patricia Mananghaya), a woman with hair 12 meters long, trawls the river for corpses—the bodies of victims of the war launched by the Philippine government against the Communist insurgency in 1987. She grows her hair longer every time there is suffering in their village of Iraya. Later on, she is whisked away by her father to Hawaii, where she settles down and is eventually renamed Stella (She Maala played the grown-up Estrella/Stella).

The play, staged as a theater-in-the-round, was directed by Raffy Tejada and adapted for the stage by Palanca Hall of Famer Rody Vera. The musical arrangement was provided by Dodjie Fernandez.

The play opted to trim down a lot of important details and major characters from the novel. Obviously missing was Luke McIntyre, the 19-year-old Australian who went to the Philippines to look for his father Tony, who had gone missing after he came to the country to document the ongoing conflict.

The novel’s complex narration took many turns and digressions that could sometimes lose its readers. The play, on the other hand, packed a tighter story by looking more through Estrella’s point of view as she recounts harrowing tales about her hometown Iraya. Still, the story did not suffer from the heavy trimming it went through from page to stage.

The novel is told in a nonlinear narrative, a technique that was also employed in the play.

Two Estrellas were seen simultaneously on stage. One Estrella (now Stella) sat on an easy chair by the corner, reading from her letters, while her much younger self was in another part of the stage, acting out her memories and recollections.

Stella, who was looking back from the future, would sometimes cross over to the past as she tried to jog her memories of Iraya. This made for an effective technique that drew audiences closer to the story.

Although the actors oftentimes spoke in chorus from the fringes of the stage, it was not hard to keep track of the goings-on. The performances were carefully directed so that the viewer could look at different points of the stage and not miss out on any important scene.

What was also remarkable in the play was the fluid transition from the young Estrella and her sister Pilar to their adult counterparts. Both versions of the characters met on stage in one scene, the younger ones handing over a piece of garment to the other, signaling the transition to adulthood. The trick was plain and simple, yet cleverly effective.

The performances by the actors were by and large remarkable, although one could not shake off the feeling that some of the actors playing more mature characters were undeniably young. There were also times when some of them missed out lines that were intended to be humorous.

The play’s musical arrangement was not without flaw. The voices of the actors were often drowned out in the musical moments, their singing indistinct. A lapel microphone would have been helpful.

But, overall, especially in parts when the performers came together on stage, the musical pieces were quite captivating. What resounded most was Pilar and Estrella belting out: “I love my Iraya, yesadu (yes, I do)!”

The otherwise spare stage design was noteworthy; it was able to conjure the image of a war-ravaged community. A seemingly rickety scaffolding at one end of the stage made for a sturdy bridge that was able to hold a singing crowd. The stage designer, however, could have provided a backboard to keep the sound from going off into the hollow space beyond the stage.

“Fish-Hair Woman” is as much a story about the crimes of the government against its people as it is an intense longing for home and a recollection of memory, marked by one’s own sense of fiction in an attempt to make sense of the events that have scarred her life and helped define who she is. We do not know the truth, but we just happen to accept what we believe is true. Or as American writer Joan Didion put it: “We tell ourselves stories in order to live.”

At one point of the play, Tony McIntyre addresses Estrella: “For beauty is nothing but the beginning of terror,” a quote taken from poet Rainer Maria Rilke.

“Fish-Hair Woman,” although laced in Philippine mythos and folklore, was a stark tale of a tragic time in our country. The play was dark and harrowing, which made for a beautiful thing.