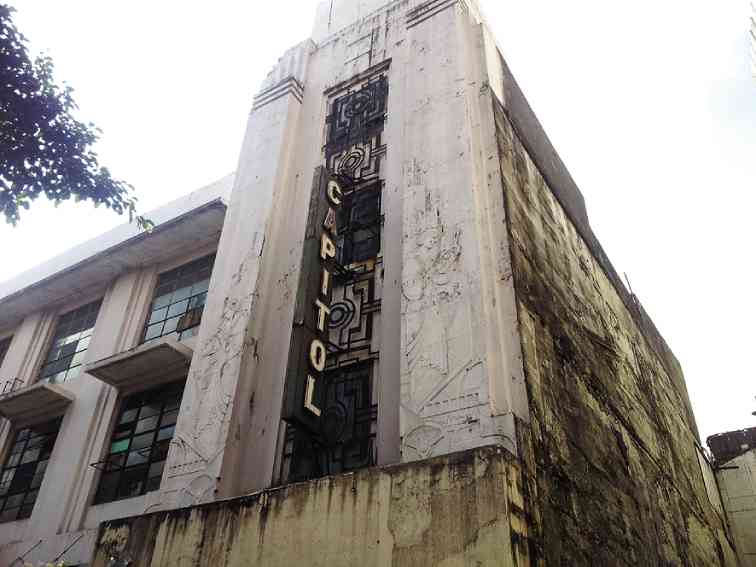 in Escolta was once a famous ArtDeco-style theater in Manila built during the 1930s. DARYL BAYBADO

The young are reviving Escolta

Heritage conservation groups and youth organizations are trying to bring back the glory of what was once dubbed the queen of streets, Escolta.

But is it still worth the effort?

For Romel Leal Santiago, vice president for external affairs of the Heritage Conservation Society-Youth (HCS-Y) and head of the Escolta Revival Movement, the once famous street is worthy of its revival.

Santiago is not alone in the advocacy. With Escolta Commercial Association Inc. (ECAI) and HCS-Y, they are also supported by 98B COLLABoratory, an artist group, and the International Council for Monuments and Sites.

Santiago also called for more efforts of different organizations from universities in Manila to introduce Escolta to students.

“We would also appreciate the efforts of organizations from different universities in Manila for introducing Escolta to their fellow students,” he said.

Santiago, who organizes events like tours, flea markets, etc., also serves as coordinator of ECAI, a group of property owners based in Escolta which assures order and security in the district.

“I organize activities and initiatives to help extend public awareness about Escolta. With the help of my colleagues from HCS-Y, we make sure that Escolta will revive the public’s interest by inviting media outlets and online sites to visit and gather stories about the place,” he says.

Dayang Yraola, founder and lead curator of Project Glocal, said that Escolta is being revived after years of neglect.

“My hypothesis is that what Escolta needs is for people to believe again that it is a place where you can actually go to do stuff, not fear for your safety against street vagrants,” she said.

Project Glocal is a social experiment which involves artists from Bangkok, Hong Kong, Manila and Singapore.

“Transi(en)t MNL” is the final installation of Project Glocal 2014, hosted by 98B COLLABoratory. The installation of the project in Manila has the theme technology plus heritage plus people.

“If a project draws people even for a short while, I guess that is already a contribution to their cause,” said Yraola.

Yraola also stressed that for Project Glocal artists and creative partners, the impact in supporting the cause could be realized or expected to manifest in their works.

“It is important is that an opportunity of creation is presented to them,” Yraola said.

For her, holding projects in Escolta is deemed as activation of spaces which are nonprofit, non-invasive, ephemeral but also innovative and creative.

For fashion photographer Karlo Torio, Escolta is a beautiful place and has a spectacular scene to offer.

“From food to photogenic buildings, it’s worth a thousand shots from different angles. It is better to preserve these heritage sites, so we have something to look back and appreciate the old life, the buildings, the environment,” Torio said.

But getting support from the government is a problem.

“As per Heritage Law, the local government will be the major implementing body of all conservation works within Escolta, which was once declared by the National Historical Commission of the Philippines as a heritage zone. But dealing with the local government has always been our major struggle,” Santiago said.

“Preserving heritage is not a priority to the present administration, so we are pushing our efforts in public awareness,” he added.

“Its anticipated revitalization may boost the morale of Filipinos because it will prove to us that it’s not yet too late to love, value, protect and maintain the treasures of our past. The next generation will continue to tell the story of what was once the central business district and the true repository of economic greatness in the Philippines,” Santiago said.

Escolta, located in the old downtown district of Binondo, Manila, was a major center of global trade and commerce for three centuries since 1594.