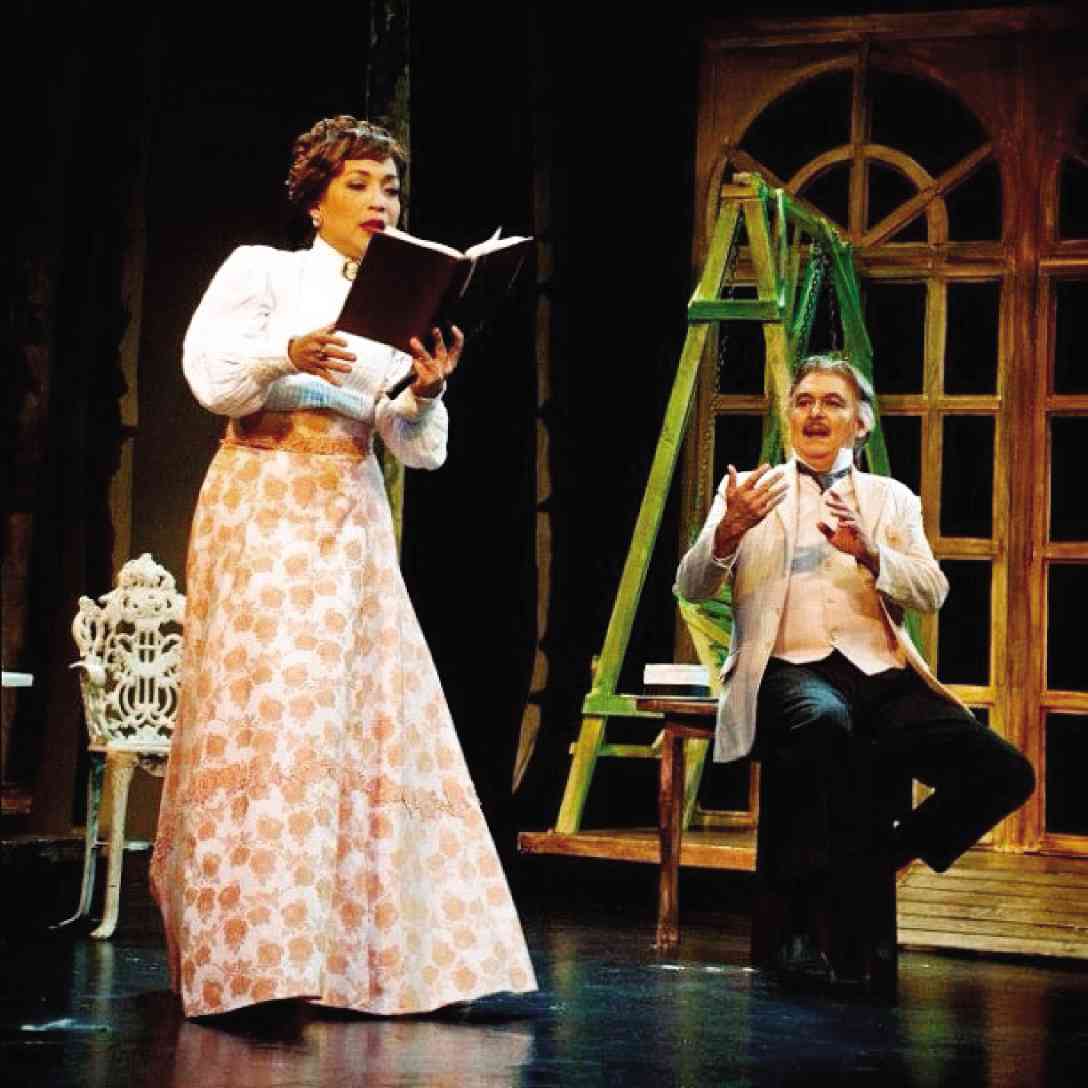 It was at the Ateneo de Manila, with its Jesuitical emphasis on the humanities and theater as character formation, that Leo Rialp, director and actor for the stage, screen and TV, developed a love for theater.

“I was in Grade 7 when Johnny Manahan, a classmate, and I were cast as nuns in the Ateneo’s centennial production of Fr. Horacio de la Costa’s ‘Light Cavalry,’” Rialp recalls. The play was to be presented at the adjoining Assumption Convent, but young Rialp was ordered to cross the street (Herran, now Pedro Gil) to St. Paul College, to be dressed up as a nun by the sisters there, and return dressed in the vintage habit.

He refused, visualizing the laughter of the passersby. Director Fr. James Reuter gave him hell (in a manner of speaking, of course), but was properly mollified when Rialp demonstrated how skillfully he could get in and out of the nun’s habit.

“In high school,” he says, “it was the dedication and brilliance of Onofre Pagsanghan that dominated our years. In those four years, Pagsi, as he is known, had staged ‘Hamlet,’ ‘The Merchant of Venice’ and ‘Cyrano de Bergerac.’ But the best thing about being in a Pagsanghan play was simply being around him, because he inspired all of us to do our best ad majorem dei gloriam (for the greater glory of God). He was really more about being a man for others than he was about theater.”

It was also in high school, even while playing great Shakespearean roles, that he grew aware that he really wanted to be a director; he found it a more challenging job.

So in college, Rialp stayed away from the drama club. Then one fine day he decided to attend a performance of Shakespeare’s “Richard III,” directed by someone he had never heard of before—Rolando Tinio.

“That production blew my mind,” he says. “Two years later Tinio recruited the boys of the Ateneo Glee Club to play the chorus in T.S. Eliot’s ‘Murder in the Cathedral.’ My gangmates were cast but not me. So I auditioned and got the role of one of the knights. Images of that outstanding production are still vivid in my mind to this day.”

Later he directed a play by “a young philosophy professor,” none other than Salvador Bernal. The play starred “a very pretty young lady” named Laurice Guillen, who was taking up a postgraduate Communication Arts course. Soon they were appearing in plays designed by Bernal and directed by Tinio (and vice versa!), including “The Bald Soprano” and the sarsuwela “Paglipas ng Dilim.”

His future as a director, meanwhile, was assured when he became stage manager for Tinio in Armida Siguion-Reyna’s “Mga Ibong Mandaragit,” the stage adaptation of Lillian Hellman’s “The Little Foxes.”

“What an experience that was,” says Rialp. “I was privy to the mind of a theater genius and learned so much in that short span of time enough to last me a lifetime.”

After graduation came marriage, a succession of children, and Rialp says theater just couldn’t feed his growing family. So he became a director for TV, and he is still at it. Through the years, Rialp has appeared selectively in films and plays. He was last seen as the suave, smooth-talking Governor General Taft in Dulaang UP’s “Ang Huling Lagda ni Apolinario Mabini.”

Rialp cites favorite colleagues who have strongly influenced him. There’s Tinio (“He was talking about scenic action even before it became a theatrical byword”); Nestor Torre, for “insights into character and ethical practice”; Bernal, for “dramaturgy, dramatic theory, and scenic and costume design”; Tony Mabesa, for teaching him styles of acting and the literature of different periods; Jonas Sebastian, for “unlocking Shakespeare’s meanings and intentions”; and Noel Trinidad, for teaching him how comedy should be performed, written and directed.

“The above, all directors except Badong (Bernal) and Noel, taught me a lot about directing and acting in theater,” says the director-actor.

“I believe I can only be a good actor if I am well directed, especially in the theater,” he adds. “I’ve read so many books on acting and on actors acting. Mostly they have been helpful. But I find that each individual actor chooses the techniques or styles that work best for him. All the books of acting will start with technique, and it is really up to the actor to employ the technique that works best for him.”

What does he think of the Filipino actor?

“We’re more in touch with our feelings so that it isn’t a major problem for us to perform or depict a character’s emotional life. Filipinos seem to be able to easily draw from our emotional wells. Not so the Western actor who finds it difficult to draw from their experience and express their emotions.”

“At the same time, I think we shed tears too easily, even when it is clearly inappropriate, when the characters wouldn’t ordinarily be expected to weep in the scene,” he says. “Of course, Filipino writers are encouraged to write scenes so that actors are expected to be weeping through extended scenes.”

“However, I believe the Filipino actor would be more effective if he applied intellectual rigor in his examination of and preparation for a character. This is the part of acting that I enjoy very much; exploring the intellectual and emotional life of the character, creating a back story that corresponds to the text of the play, mining the gamut of human intentions and wants to arrive at a truthful interpretation of a character. I am not saying this is for all actors, but this is what I like doing. I enjoy the research into the background and period of the play and its characters. It’s more fun that way.”