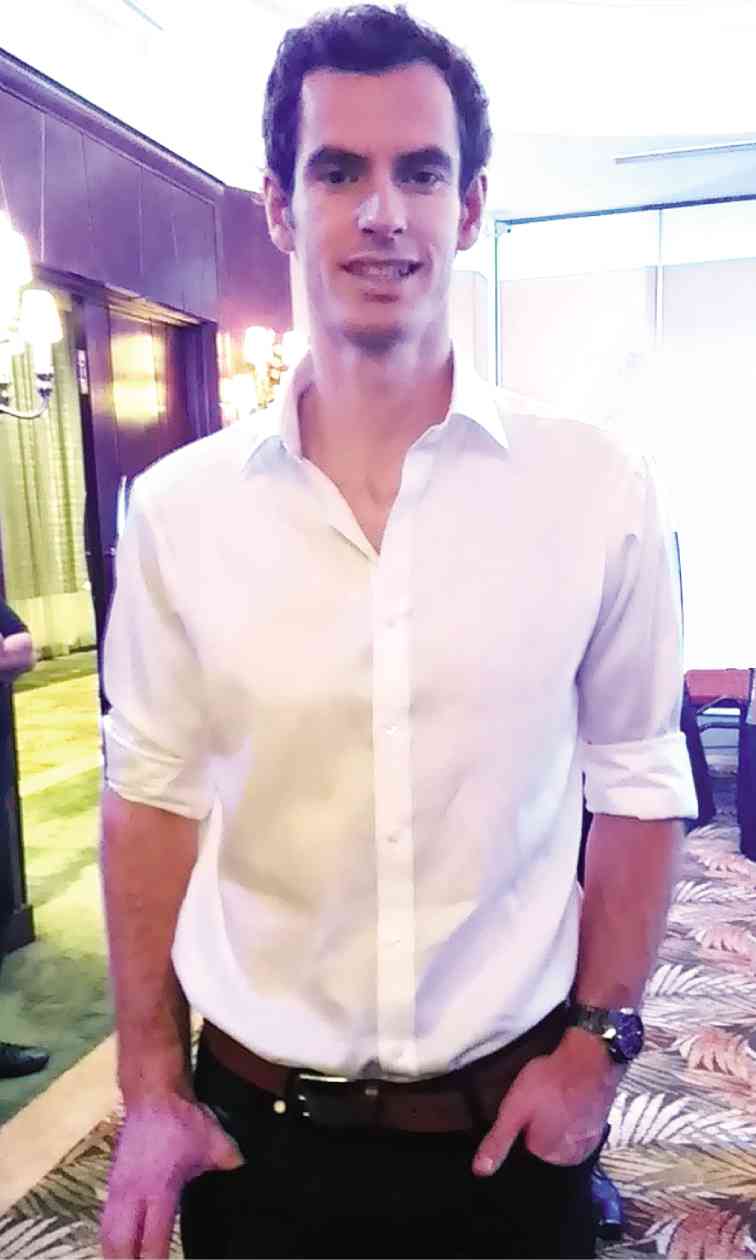 A FRESHLOOKING Andy Murray had just come off of a long-haul flight from London.

MANILA, Philippines–It was sports history in the making, with many of its participants gathered in one room for a night—and then slugging it out in a tennis arena for three consecutive days—in Manila.

About 18 tennis pros, legends and upcoming talents attended the welcome dinner hosted for the International Premier Tennis League (IPTL) Thursday evening at the Garden Ballroom of Edsa Shangri-La. It was the night before the tournament kicked off its first leg, which runs until Sunday at the SM Mall of Asia Arena.

As our eyes darted from one table to another, finding the sport’s familiar faces, we imagined the scene playing out before us with an epic soundtrack—akin to the music of the Oscar-winning film “Chariots of Fire” or Ramin Djawadi’s main theme for the HBO series “Game of Thrones”—instead of the mellow instrumental music played by a band during the event’s latter half.

Exaggerated much? We think not, for among the attendees were some of the game’s finest.

There was Andy Murray, whom we couldn’t believe had just gotten off a long-haul flight from London. He looked smart and rejuvenated, wearing a crisp white-collared shirt tucked in a pair of relaxed denims. The guy sure knows how to accessorize: leather belt and loafers as well as an elegant Rado wristwatch.

The aura he projected was a turnaround from the previous week’s look of anguish, when he got a thrashing from Roger Federer en route to the semifinal of the ATP World Tour Finals in London’s O2 Arena.

Though late for the gathering, the Scotsman was all smiles, gamely accommodating our queries and posing for photos with guests who swarmed around him.

We enjoyed witnessing Murray’s inner fanboy when Manny Pacquiao arrived at the event. The world No. 6 seemed unfazed by all the cameras and microphones being shoved at his and the politician-athlete’s faces during the brief encounter. He flashed a wide grin when asked to pose a la Pacquiao (raised kamao) with his boxing idol.

We missed Aussie tennis great Pat Rafter, but meeting other legends like Spain’s Carlos Moya, Croatia’s Goran Ivanisevic and France’s Fabrice Santoro more than made up for it.

Though pushing 40 and slightly thinner than when we last saw him as a pro, the retired Moya has remained attractive, as did his Croatian counterpart who coaches 9th-ranked Marin Cilic, the reigning US Open champion.

Speaking of Croats, we caught Ivanisevic and Cilic, along with fellow UAE Royals Nenad Zimonjic, Kristina Mladenovic, Malek Jaziri and coach John-Laffnie de Jager, leave the ballroom to take a team photo. It ended up in the statuesque Mladenovic’s Twitter handle, with this message: “Team picture! @DjokerNole @CaroWozniacki we are waiting for you! Ready to #BreakTheCode #IPTL #Royals @cilic_marin.”

The tweet made us hopeful. We wanted Novak Djokovic and Caroline Wozniacki, present men’s and former women’s world No. 1, respectively, to surprise fans by coming over to complete their team at the MOA Arena.

Team spirit was well alive among the Micromax Indian Aces, as well.

Though Ana Ivanovic, who arrived in Manila the night before, was a no-show at the fete, other Aces, such as playing coach Santoro, Gael Monfils, Sania Mirza and Rohan Bopanna, were mostly glued to their table after the program, engaged in lively conversation.

Now we know Monfils is a character not just on court. He spoke to his groupmates in an animated fashion, his words punctuated by arm gestures and wide-eyed facial expressions.

We failed to meet the Singapore Slammers, including Rafter and Tomas Berdych, who seemed to have gone to bed early.

Their teammate Daniela Hantuchova left the event in a hurry, but we managed to catch a glimpse of the 31-year-old who didn’t seem to have aged a bit. The Slovak’s doll-like features and long, elegant pins left us mesmerized, but her quick strides toward the elevator had us running after her.

The Manila Mavericks couldn’t get together to discuss their game plan or even enjoy each other’s company that night. But considering their different flight schedules (plus Manila’s traffic situation, which Murray has described as “naughty”), we’ll just have to trust playing coach Treat Huey’s ability to inspire his team, which features Murray, Moya, fan favorite Maria Sharapova, Jo-Wilfried Tsonga, Daniel Nestor and Kirsten Flipkens, to win the first-ever premier tennis league that made the Philippines a significant partner.