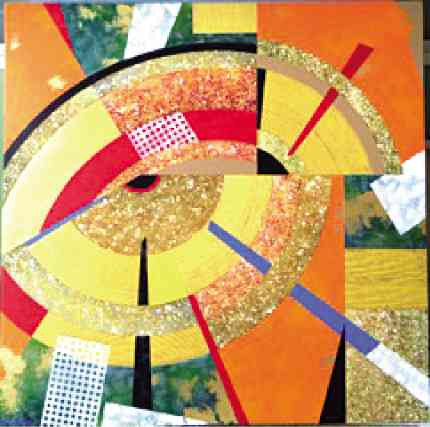 In art exhibitions of the late Pacita Abad, the pleasure of her works was intensified by the delightful titles, mostly self-referential, that accompanied them.

To wit: “I Have a Million Things to Say.” “I Hope Everyday Is Today.” “The Day I Bought My TV.” “My Sequins Have Seeped into Your Life.”

While the titles seem to suggest everything personal and emotional about the artist, the viewer is initially confounded and perplexed.

After all, there is nothing representational on the canvas, but what is clearly visible to him is a stun of a multitude of colorful stripes, circles, plastic buttons, mirrors, beads seemingly assembled in helter-skelter fashion, with batik and dyed muslin fabric sewn into padded canvas. Yet despite this, Abad bountifully summoned emotions of joy, exaltation, celebration, as well as anxiety, confusion, obsession and other conflicting emotions.

The same emotions are to be experienced in a show now at Renaissance Art Gallery. This is the third solo exhibition of Sonny Fernando, and it is appropriately titled “What’s on Your Mind?” The title may strike the viewer as too inquisitive and interrogative for comfort, almost as if the artist already knew what was in the viewer’s mind. But if the viewer were to join into the aesthetic experience afforded by Fernando, he would be well-rewarded.

At the outset, it should be remarked that Fernando’s draftsmanship is divergent from Abad’s spontaneous, gestural and instinctive brushstrokes.

Indeed, in Fernando’s works, the trace of the hand seems to have been banished from view.

His works are streamlined, sharply geometric, seemingly machine-tooled, studiously calculated and measured, nothing improvisatory, with no allowances for accidents, mistakes, and, one might say, surgically and cleanly executed with all the instruments at the command of an architect or an engineer.

Precision is paramount. In Fernando’s creative dictum, sloppiness is anathema.

Regard then some of the works, and let the viewer ask his own percolating questions. Can a state of confusion be so artfully configured?

In “Confused” the artist deploys the arrow-like bands shooting from various directions, invoking a mind arrested in indecision, as though he was being pulled one way and then, as abruptly, redirected elsewhere.

A similar visual situation is depicted in “Unfocused,” characterized by a splintered target, with all the shooting bands missing the central mark.

What we discover here is that Fernando employs geometry, or geometrical forms, as though they were punctuation marks. This is most obvious in a work titled “A Case in Point” which declares to be read as a conscious rendition of an argument.

By turns visual and conceptual, the work is emphatic and brash, punctilious to a degree of rudeness, with the black spot in the off-center glaring like an accusing eye.

More works are illustrative of the role of geometry as emotive instrument. “Euphoria,” which is the exact opposite of the aforementioned “Confused,” features the outlying planes of color converging toward the center, climaxing in a burst of exultant yellows bursting with happiness.

Fernando is skillful at building an abstract and geometric entity. He knows how to bring the various parts together. Indeed, he “anatomizes” the symbolic structure of what should be perceived as a mood, sentiment or emotion. It has to make sense, with each geometric form colluding with the rest to create a willful totality, able to stand, in engineering terms, with integrity.

In “I Got You Covered,” Fernando devises a sensuous whorl, almost floral-like, each petal-form conniving to integrate into a centrifugal force. The viewer wonders what is being concealed, as though the visual setup affords no chance of a possible escape.

The same is true in “Getting Nowhere,” as the viewer follows a trail that seems sure in its direction but is unexpectedly disrupted by a collapsed bridge or a mountainous landslide of boulders.

Undoubtedly most affecting, and possibly controversial, is the work titled “Undressing Sabel.” The name alludes, as every art-lover knows, to the iconic subject of National Artist BenCab. The most distinguishing image of Sabel is the voluminous drapery that enshrouds her feeble body. (In real life, Sabel enfolded herself with plastic sheets scavenged from the city’s garbage cans.)

In Fernando’s work, the act of “undressing” Sabel constitutes a deliberate artistic assault on the now revered image, even as the pointedly nonfigurative geometric forms might suggestively aspire toward another classic subject in art, the nude.

In so doing, Fernando has indeed proven his point: What’s on the viewer’s mind is beyond the control of the artist.

A comebacking artist, Fernando has for many years abandoned his love for painting in favor of his profession as an interior designer. But with this show, we are now well aware of what has always been in his mind.