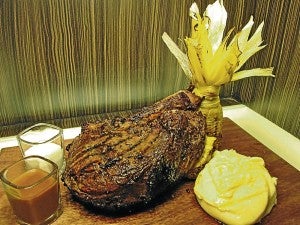 When seven friends from way back—Joel Buse, Carling Santos, Arnold Ayson, Vince Rodriguez, Wally Sy, Roseann Bautista and Raymart Santiago—thought of building for themselves a haven to have coffee, share a few bottles of beer and eat to their heart’s content, the concept of Red Garlic was born.

Why not? The group of seven is an able and merry mix—a chef, a restaurateur, a doctor, businessmen plus an actor, all of whom shared a passion: love for food. “Only good food!” adds Santiago.

At Red Garlic, there is something for everyone. With over a hundred items on the menu, the offerings range from breakfast to midnight snacks, with every conceivable cuisine type accounted for.

Raymart recounts that their food-tasting sessions were something else. There was just so much food, so many ideas and personal favorites, hence the resulting diverse fare: melt-in-your-mouth tequila US Beef Rib Barbecue, Thai Bagoong Rice, Arroz à la Cubana, Malaysian Satay, Curries, Callos. These pickings need little introduction as they are dishes we all know of, a plethora of old-time favorites, made spiffy in the hands of chef Vince Rodriguez.

Rodriguez owns Peppermill Caterers and hails from a family of kitchen artists. He is the brother of fashion designer turned-restaurateur Porte Rodriguez, and Les Roches-trained chef Nick Rodriguez of the famous Bistro Candon in Ilocos.

Though there are six other personalities who greatly influenced the restaurant’s final menu, each dish that comes out of the kitchen has chef Vince’s magical touch. 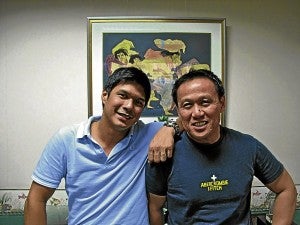 Take, for instance, Raymart’s sardinas that he cooks himself at home and supplies the restaurant with. In the 20 years he and I have been good friends, I never even knew he cooked sardines at all—delicious sardines. It’s a recipe he inherited from his mother, which he tweaked a bit.

In the hands of chef Vince, it was transformed into  Sardinia—spaghetti cooked al dente, tossed in olive/sardine oil, seasoned and spiced just right, with whole garlic cloves, chunks of onions, tomato wedges, mashed sardines and chilies, garnished with a whole sardine on top. I have gone back to Red Garlic three times just for this dish—light, without much fringe yet flavorful and tasty.

But the dish that took my breath away because of the excellence of its execution is the Original Angus Tomahawk, a juicy 21-day aged, 2-lb USDA angus rib-eye steak chef Vince ages himself.

Before going to the grill, it is rubbed with a spice mix which, according to the chef, took him two years to perfect. The mix has over 50 herbs and spices, sourced from all the world where the herb or spice is best: Mexico, South America, Japan, even Ilocos, chef Vince’s hometown.

The chunk of steak melts in your mouth and is suitable for all ages (from 1-92) with or without teeth. It is just so soft, so juicy. I like it best plain, and is excellent even without the sauces, just with salt and pepper. The process of aging, grilling, the texture, the bite, the mouth-feel—it’s sheer perfection!

His pizza crust also calls for praise. Like his steak rub, it took years to perfect—thin and crisp, even after it has been sitting on the board for a while.

I like the Basillica—Fresh mushrooms with grilled Italian sausages, topped with Fontina and Mozzarella cheese, drizzled with Truffle Oil; and the Torre del Greco—Roasted Italian tomato-basil with sautéed rock shrimp, fresh arugula tossed in lime-vinaigrette garnish with grana padano cheese.

The sushis are presented beautifully, bursting with a fusion of flavors. According to chef Vince, his food is best described as a combination of all the cuisine he loves—Japanese, his favorite; Mexican, coming from his stint in California; curries, another passion, along with chilies; and a lot of what he loves from his native Ilocandia, where he spent most of his younger years.

I see Red Garlic as a place that one will visit quite frequently, lured by its many offerings, served in fantastically large portions. I myself am constantly tempted to sample other things, yet each time I find myself craving for the Sardinia and the lava cake with raspberry ice cream. Soon as my sardine/chocolate phase will be over, I   am off to new dishes.

Reservations are a must, since the place is always full.