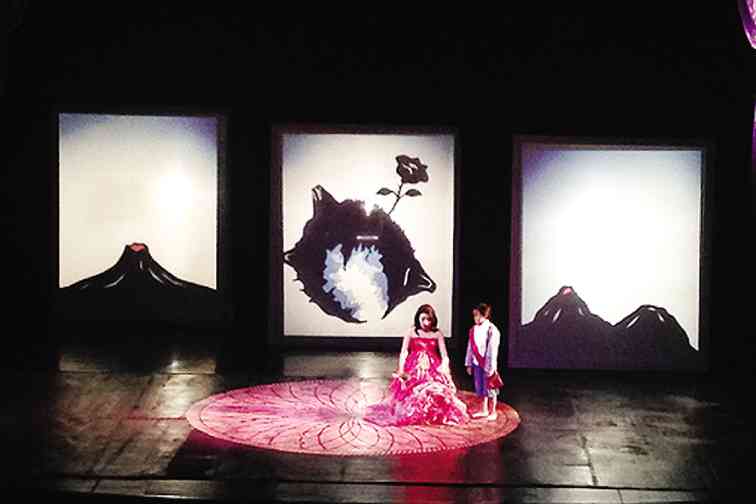 It was recently a fad on Facebook to list your 10 favorite books, and a quick survey of the results confirmed what I’d known for years: “The Little Prince” is on everybody’s list. It’s at the top of mine.

Antoine de Saint-Exupéry’s timeless classic is high philosophy disguised as a children’s book, and is a worthy project for Tanghalang Pilipino.

Karilyo’s puppetry bring a new dimension to the play—minimalist and expressionistic in a way that captures the best of Saint-Exupéry. I was particularly pleased with how the use of light and shadow rather than physical props gave the play an ethereal feel, disconnected from the mundane.

A good work of art captures the uncapturable and says what cannot be said. A good theater adaptation brings out elements of the story that were not possible in the original medium. Sadly, this production seems to have forgotten both.

Spoilers ahead. Though honestly, if you haven’t read “The Little Prince” yet, you need to fix that. Ask for it as a Christmas gift from someone who loves you.

It is not enough to have beautiful images. They must be integrated into the story. The gaudy jeepney-esque train, for instance, felt like an out-of-place attempt to add a Filipino feel to the story. Some stories are so universal that confining them to a specific time and place hurts the message.

Similarly, the songs felt almost superfluous. You use musical numbers to rouse the audience’s feelings, but the emotion of this story comes from insight, not from raw emotion. The lyrics of the play’s songs simply do not stand out. Who hasn’t made a song about sunsets or searching or leaving someone behind?

The songs need to become more philosophically ambitious—this is “The Little Prince!”—or they need to go. Where’s the wordplay? Where are the beautiful ideas that, this time, only the Filipino language can convey? The only examples to be had were at the very end, when mahal and mahalaga were juxtaposed. There is no such equivalence in English.

This is how you make meaning in the hearts of the audience. Unfortunately, it doesn’t work with the audience spoon-fed that insight, no matter how joyful actor Marco Viaña, as the aviator the Little Prince meets in the desert, makes it look. It feels fake if you tell the audience what to feel. You have to make them feel.

Converting children’s books to theater is risky, and for all its lofty wisdom, “The Little Prince” is laid out as a children’s book. Characterizations are necessarily thin, too thin for effective theater. A good adaptation recognizes this and is not afraid to add.

The book, for instance, makes us sympathize with the lamplighter in ways that cannot be replicated by an actor simply turning a light on and off. We cannot properly pity conceited socialites and stuck-up kings if they are reduced to caricatures.

“The Little Prince,” in other words, was compassionate. In the book, the adults were seen as fools, but the pantomime-ish performance of the stage adaptation merely makes them look like idiots.

There is a difference. A fool is deluded but sincere, deserving of pity. He has some dignity. An idiot is merely a clown with no punch line.

The snake is a saving grace. Lhorvie Nuevo plays her role like a seductress and thereby adds a new layer of symbolism to the story. After all, the Little Prince is innocent—but to return to his love, he must do so through a loss of innocence, through close contact with a body that is ripplingly, torridly female. The serpent does represent temptation, does it not?

The discovery of sexuality and the confrontation with death intertwine here with love and sacrifice, and the Prince faces it without fear.

That is how you add something to an adaptation. However, reducing Jonathan Tadioan to a snuffling, ragged-looking animal is quite a waste of his talent—and is also demeaning to his character, for the fox of “The Little Prince” is no mere animal.

Story-wise, the worst move was the removal of the framing device. The Pilot’s story of the boa constrictor and the elephant serves to introduce the theme. You have to get the audience thinking about what that means so that they won’t question the absurdity of a prince in love with a rose. If you start out with a passive-aggressive lover’s quarrel between a prince and a rose, you’re going to have trouble building audience sympathy for them, no matter how adorably Regina de Vera plays the rose.

Similarly, by taking the focus off the Pilot, you’re putting enormous pressure on the very young actor playing the Prince. Allen Immanuel Ryce struggles mightily but it’s not fair to expect him to overshadow actors like De Vera and Tadioan. Yet he must, because the Prince is a character who outshines everyone else, whose very presence makes the stars laugh.

There’s a lot of talent and potential here but the play needs to be as ambitious philosophically as it is visually. A play should not be afraid to go off-book but neither should it forget the source material’s central message. “The Little Prince” isn’t a romance. It’s a story about cutting through the illusions of life—as its most famous line says—to see with the heart what is truly essential, what is invisible to the eye.