A starry, spectacular beginning for The Theatre at Solaire | Inquirer Lifestyle ❮ ❯ 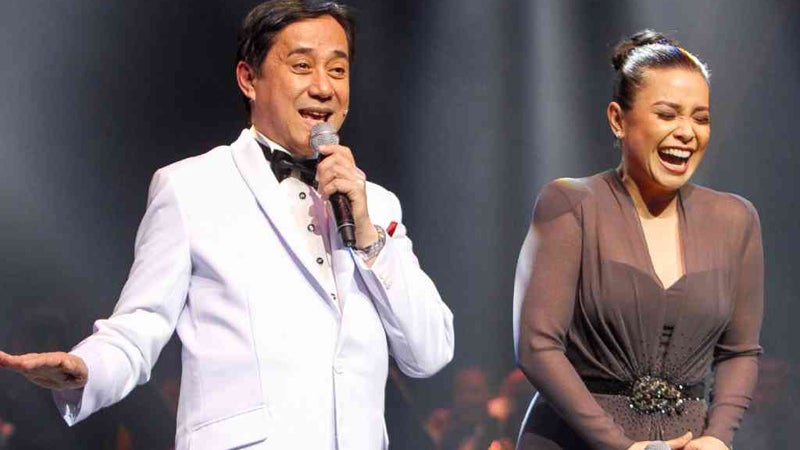 A starry, spectacular beginning for The Theatre at Solaire

An ill-equipped or badly maintained auditorium can disrupt the audience’s concentration. Scene changes may not happen on time, affecting the flow and the pace of the narrative. Washed-out lights can subtly discourage the audience from focusing, and a poor sound system can drown out the voices of the actors or singers with static.

However, an auditorium that is too grand and calls attention to itself can also have an adverse effect on viewer attention. Make it too huge, and an undisciplined production designer may be tempted to fill it up with all the bells and whistles he can think of. Stock it with every pyrotechnic state-of-the-art gadgetry if the producer or venue owner has the budget, and the artists just may be tempted to go with spectacle at the price of substance.

The Theatre at Solaire, which launched with a musical extravaganza last week showcasing the best of the best in the Philippine performing arts, raises the bar higher by creating a platform that makes its technical wizardry not just serve its performers, but bring out the best in them.

As its president and COO Thomas Arasi noted in his speech, the artist remains the focal point of the spanking new theater. And empowering its artists, both the performers and the creative team behind the stage, with the best elements of stagecraft, The Theatre at Solaire can give its audience a show they will never forget.

The launch proved it—and there was no lack of talent, none in front of the audience, none behind it.

Audie Gemora, Solaire’s new director for entertainment, aptly started the show with an almost bare audience, with his fellow actors, technicians, propsmen and other stage hands seen preparing for the presentation.

Gemora, given his pedigree in Philippine theater, already carried enough star power—or industry leadership, to use the corporate term—to underline how serious Solaire is in its commitment to the art and the industry, and yet also savvy enough to aim to have fun while fulfilling it.

Perhaps it would be fair and more accurate to say that several disciplines in art were honored that night. It was not just musical theater that held center stage; opera, classical music, pop music and the latest dance numbers were also given their generous time in the sun.

Though the hotel’s stature made it the ideal place to showcase Broadway and other English-language musicals—“Chicago” is opening there this weekend—original Filipino songs as well as excerpts from original Filipino musicals dazzled the audience on opening night with their flair, wit and a poignancy that comes from a mixture of relevance and nostalgia.

There is something for everyone. That, in effect, was the message of The Theatre’s management and the creative team, who also makes up a Who’s Who in Philippine performance art: director Dexter Santos, writer Floy Quintos, production designer Mio Infante, lighting director John Batalla, graphic designer GA Fallarme and sound engineers Rards Corpus and Jaime Godinez.

The performance is the thing—and the audience was swept into its magic from the time each suite was introduced by a prominent artist, to highlight a particular state-of-the-art element of the theater, from the acoustics to the backstage facilities.

Scene changes flew by without missing a beat, but without also giving away their hand. A deliberately messy stage gave way within seconds to an elevation that solemnly hosted a classical orchestra. The lights and the various colorful designs projected on the stage walls did not just set the tone or breathed life into the atmosphere, their movement and changes in hue also made them one with the music and the message in the songs, augmenting the performance without calling attention to themselves.

At the end of the night, the performances and how the various elements of the Theatre enlivened them testified to the venue’s sophisticated capabilities. The classical suite showcased luminaries in both music and ballet: the ABS-CBN Philharmonic Orchestra conducted by Gerard Salonga, the Philippine Opera Company, Ballet Manila led by the stunning Lisa Macuja-Elizalde, and the soaring renditions of Karla Gutierrez, Myramae Meneses and Camille Lopez Molina.

The pop music suite featured rousing, almost nonstop song-and-dance numbers by Sam Concepcion, Regine Tolentino and Ednah Ledesma, supported by the kineticism of the Airdance and the Manoeuvres.

Filipino music took a bow with current and timeless favorites, sung with passion and power by Morissette Amon, Christian Bautista, Kyla, Yeng Constantino and Martin Nievera, whose gift for balladry captivated the audience, as usual.

The same could be said of the original Filipino musical suite, especially with Isay Alvarez reprising her acclaimed turn in “Katy.” Robert Seña, Karylle, Myke Salomon, Aicelle Santos and the Ryan Cayabyab Singers also had their turns with affecting numbers from “Magsimula Ka,” “Rama Hari” and “Rak of Aegis.” The nod to the countless other Filipino musicals that did not have their time that night was an apt tribute.

The finale was preceded by the anticipated Broadway Suite, which was a one-lady show that represented the pinnacle of world-class artistry that Filipino artists aspire for and have also come to be known for. Lea Salonga’s musical journey through well-loved songs from “Wicked,” “Les Miserables” and “Cats” (among others) was a fitting climax that merited a standing ovation.

The often-desired rapport between the artists and the audience was on an all-time high that night. And in subtly supporting them to showcase their very best and create that desired bond, The Theatre at Solaire likewise showed that, as the newest home of the Filipino artist, it bids fair to be different from the rest.