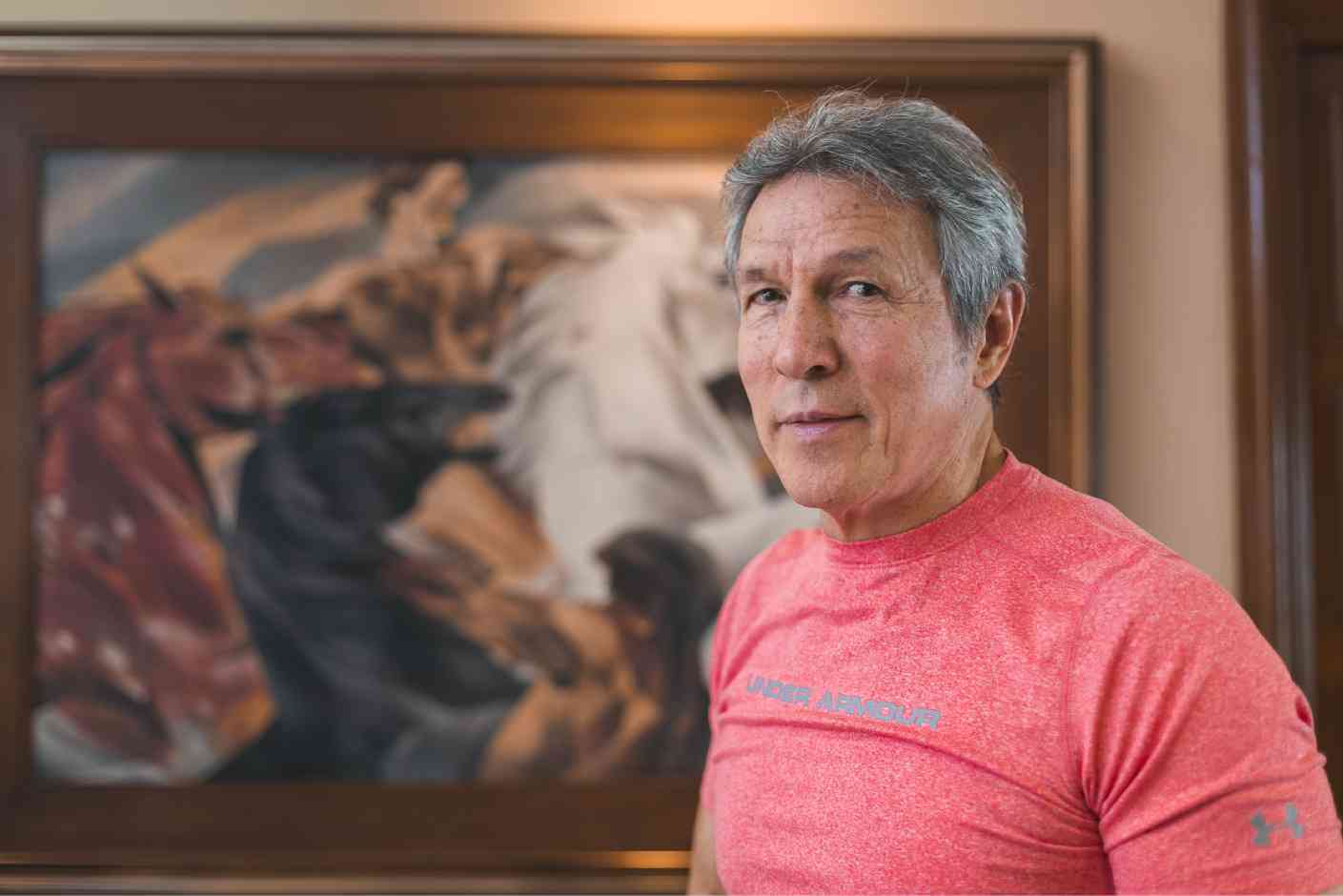 TOTOO naman ’yun (It’s true),” deadpans Freddie Webb when told that he was undisputably better at basketball than his progenies—grandson Joshua and son Jason who have similarly excelled at the sport that first made the 72-year-old Webb patriarch a household name in the 1970s.

The comparison is inevitable, now that Joshua Webb has become part of Philippine Basketball Association (PBA), the same league where Jason Webb saw action for six seasons after getting picked third overall in the 1997 Rookie Draft.

It was also in the PBA—then a fledgling ’70s tournament launched as Asia’s first professional basketball league—where the elder Webb started his stellar career highlighted by a stint with the Philippine Team in the 1972 Olympics in Munich.

For three generations, the Webbs have enriched the local basketball scene and not just with their swoon-inducing mestizo looks.

“I really didn’t realize it until it was mentioned on TV while I was watching one of Joshua’s games,” the Webb patriarch says. “And I thought, ‘wow, how time flies.’”

But the basketball star-turned-senator would always dismiss the adulation when fans unabashedly declare him the greatest ball player among the Webbs.

“At that time there were less players and only one league,” he says modestly.  True, he was in the list of the top 12 basketball players in the country, “but at that time, our population was only 15 million. Now there’s 100 million of us and more (players) to choose from.”

The ’70s hardcourt heartthrob was known for his speed, prompting the late sportscaster Willie Hernandez to once describe him as “mas mabilis pa kaysa sa metro ng taxi” (faster than a taxi meter).

But Webb regaled Filipino fans not just in sports. He soon crossed social classes, age and sex demographics by joining showbiz, playing the debonair husband in the popular ’80s TV sitcom “Chicks to Chicks.” Broadcast media was next, where his voluble self shone as a television and radio sports commentator.  It was in politics, however, where he hit his stride: From being a city councilor, he rose to become a congressman, and later, a senator.

Despite success in various fields where he could easily switch from being silly to serious, Webb always harks back to the root of his success.

“I’m happy that I’ve retired from politics, but not happy that I’m retired from basketball,” he says. “Basketball became my ticket to other professions. It brought food to our dinner table and sent my children to good schools.”

Surprisingly, despite their father’s good word on the sport, basketball managed to ensnare only one of Webb’s six children.

Jason, the youngest in the brood, made De La Salle University his playground from 1991 to 1995. But although he rightfully earned his spot in the Green Archers roster, it was inevitable that his father’s name would be mentioned in the same breath.

“May nakakausap ako na matatanda, sasabihin sa ’kin para kang daddy mo, or mas magaling daddy mo (Some older people would tell me that I took after my dad, or that my dad’s better). It doesn’t bother me,” the younger Webb says.

“I think Jason was better,” says Villavicencio, who mentored Jason in his last three seasons with the Green Archers. “I had a chance to watch Freddie and he was quick. Jason was a hard worker, mabilis at mautak (he’s smart and quick on his feet).”

Jason was also better when it comes to scoring, he adds.

The father wouldn’t want it any other way.

“I have to be honest—I think I was faster, but they’re better,” he says of his progenies.  “If you have a son and grandson, and you’re better than them, to me that’s regression. Everybody should always be ahead of the previous generation.”

But while basketball skills seemed to be in the family genes, so was tragedy.

While Jason was steering the Green Archers to hoop victory, the family had to face its biggest trial yet.

Hubert, Freddie’s third son, was tagged as one of the suspects in one of the country’s most brutal crimes, what became known as the Vizconde massacre.  The 1991 multiple murder and rape case led to the conviction of Hubert Webb and several others. Amid the controversy-laden trial and investigation, the Webbs maintained Hubert’s innocence. Although he was eventually acquitted by the Supreme Court in 2010, Hubert spent 15 years in jail.

Through it all, the Webbs summoned the courage to live a normal life.

Jason Webb continued playing for the Green Archers in the University Athletic Association of the Philippines (UAAP) where he endured not only on-court battles but also cruel taunting on the sidelines at the height of the Vizconde trial.

“Sad to say, it happened,” confirms Villavicencio. “But Jason took it very well. It motivated him to play better.”

The Webbs have since moved on from the nightmarish episode.

The gym has become Webb’s “second home,” which might explain his amazingly trim and toned physique that belies his calendar age.

“I never stopped working out,” he says. “When I saw how most (basketball) players have expanded after retiring, I decided to start working out right away. I don’t stay out late, I don’t smoke, I don’t drink.”

He also takes pride in his children, three of whom have families and businesses of their own. Hubert manages a family-owned resort, while daughter Pinky works as a television news anchor.

Jason, the youngest at 41, also worked as a TV sports analyst following his surprise retirement at 29, an age where many players are still at their peak form.

“At that time, I felt I wasn’t reaching the level I was supposed to as a pro,” says Jason.

“Why retire at a very young age?” Webb recalls asking his son.  He adds: “Jason talked to me and I said, ‘You must be crazy.’ You cannot get a better job than basketball. Yet he chose to let go of the sport he loves in exchange for loving something better than the sport. And that’s his family. He said, ‘My kids are growing and I don’t want them to be deprived of a father.’ I admire him for that. So I said, ‘If you feel that you have another priority, just do it.’”

The 5-foot-11 Webb patriarch didn’t quit playing until he was 36, after a colorful career that included playing for the Letran Knights in college and spending his finest years with the fabled Yco Painters in that PBA predecessor Manila Industrial and Commercial Athletic Association (MICAA).

In between those stints, he suited up for the Philippine Team four times, before playing his final seasons with the Tanduay Rhum Makers in the PBA.

Coaching loomed as a logical next step for Freddie, who called the shots for Yco-Tanduay and Shell in the early ’80s.  But his son Jason got lured out of his 10-year broadcasting gig when eminent  Tim Cone himself invited him to join the Purefoods Star (previously San Mig Coffee) coaching staff in the PBA last June.

“There are some opportunities that you don’t allow to slip by, and for me, that’s one of them,” says Jason Webb.

The younger Webb also took a similar detour to politics and currently serves as a third-term councilor in the first district of Parañaque City, where he emerged No. 1 in last year’s polls.

Unlike most families in the same profession who sometimes find their famous name becoming a burden, the Webbs consider theirs a come-on.

“It’s positive in some way because automatically, papanoorin ka (people will take notice). Some people would be curious, and it’s really up to you what to do with that curiosity. Are you going to impress people or not? At least that’s the first step,” says the younger Webb.

Joshua, one of Freddie Webb’s 11 grandchildren, started to carve his own name as a high school sensation who powered La Salle Zobel to its first UAAP juniors championship in 2005 and again in 2007.

“What I’ve learned from lolo (grandfather) is to play hard but to always stay humble,” the third-generation Webb says.

But the 25-year-old has yet to replicate the Webbs’ celebrated hardcourt talent.  Following his collegiate stint with La Salle, he is now a rookie playing for Kia Sorento in the PBA.

“As his grandfather, I always want the best for him,” says Freddie Webb. “I asked around and the team tells me he’s very aggressive. So rather than give him advice, I’d rather pray to God that he be given his chance to shine in basketball because he loves it.  I don’t think I can advice him more. On his own, he works hard.”

Hard work is something that the elder Webb knows of only too well. The sweaty kid shod in slippers used to passionately play the game in a shabby half court of “pulang lupa” (reddish soil) across their Cubao home. His parents were no athletes, so he had to figure out the sport mostly on his own.

But this player always dredges up his basketball memories with a hearty laugh. He doesn’t want any of his brood to feel the weight of the game and the expectations, even if he has become the family barometer.

In fact, Freddie Webb notes: “If I were to relive my life, I would want to have a father who has achieved something, and I’d be there to prove that I can do better. I want challenges.”

But, he adds, “I would still want this same family.”

There. Freddie Webb might have just revealed a family secret to three generations’ worth of success. •