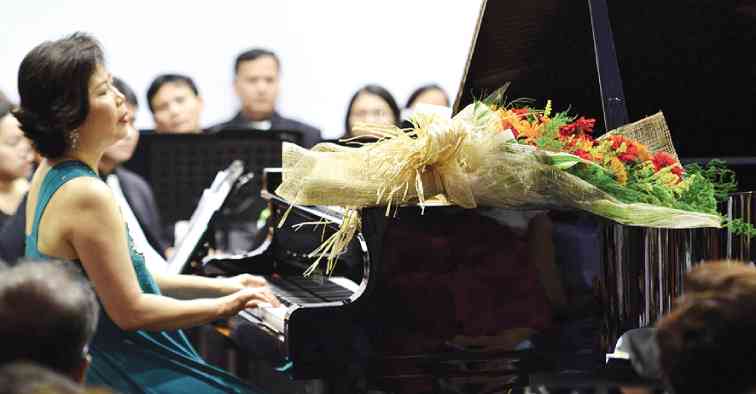 American music was the focus in “Gerswin Plus,” a symphonic concert of the Metro Manila Concert Orchestra (MMCO) conducted by Josefino “Chino” Toledo.

Pianist Cristine Coyiuto was the soloist in Gershwin’s Concerto in F. Also included on the program was Czech composer Antonin Dvorak’s American Suite, Op 98, a work he wrote while in the United States in 1894.

Presented by the Prudential Guarantee and Assurance, Inc. and the Metro Manila Concert Orchestra Foundation, the concert was held at the Audi Global City.

Off stage, James Coyiuto, added that Audi was a major supporter of the Salzburg and Bayreuth festivals in Europe.

Gershwin’s Concerto in F was the highlight of the program. Watching the Coyiuto-Toledo tandem has become an irresistible habit, as they have done marvelous collaborations.

Bringing jazz to the legitimate concert stage from the nooks of the dance halls and Broadway theaters was the masterstroke of Gershwin. Hence, the universal appeal of his works.

Christine Coyuito played with astounding rhythmic verve. She visibly enjoyed carving those bouncy jazzy rhythms as she brought out the steely charm of the piece. She played on a resonant, brand-new Ed Seiler piano, courtesy of Lyric Piano Corp.

Throughout, both pianist and orchestra simply enjoyed their playing. The pianist kept her pace impressively with incisive attacks, all expressed in poignant rapport with the conductor.

In the second movement, she etched an arresting contrast to the first and last movements, which she fired with burning passion, enthused with arresting dynamism.

Indeed, it was fun, as Coyuito herself said in the program notes. The tour the force, the detour she made to play precisely a “different genre” exemplified by Gershwin’s concerto compared to the Khatchaturian and Mozart concerti she previously played, was exhilarating. She electrified the audience whose applause practically brought down the house.

It was followed by another brilliantly essayed rendition in Aaron Copland’s Four Dance Episodes from “Rodeo,” delineating well-nuanced dance episodes that engaged attention to the full.

A plus factor of the concert was the striking acoustics. Reversing the position of the stage to face the panels that served as a shell to bounce back the sound had paid off greatly.