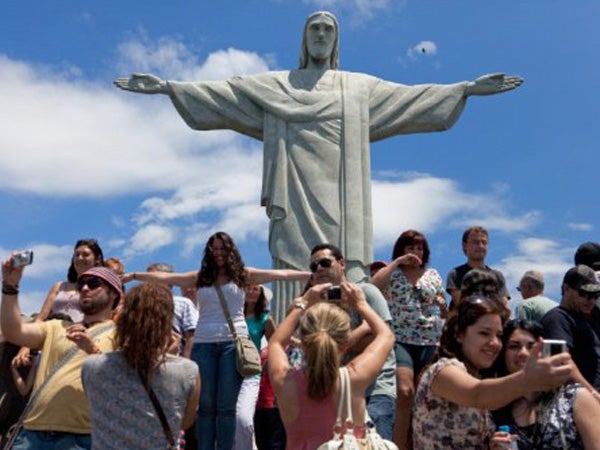 Tourists have their pictures taken in front of the statue of Christ the Redeemer, atop the Corcovado hill in Rio de Janeiro, Brazil. The Christ the Redeemer statue, one of Rio's landmarks, celebrates its 80th anniversary on October 12, 2011. AFP

RIO DE JANEIRO—Arms wide open above Rio de Janeiro, Christ the Redeemer marked its 80th anniversary Wednesday as the fifth largest statue of Jesus in the world and a symbol of the 2016 Olympic city.

Hundreds of worshippers are expected to celebrate the anniversary, aong with a vigil, concerts and an eight-meter (26-foot) cake, a fitting tribute in Brazil, the biggest Catholic country in the world with 130 million faithful.

“The gift to Christ is the world’s most beautiful city,” Rio Mayor Eduardo Paes told reporters. “Christ, with open arms — this is how we welcome those who come visit us.”

Celebrations began late Tuesday with a youth vigil and an air show. Concerts were being held until late Wednesday.

Inaugurated on October 12, 1931, the 38-meter (125-foot) statue was built and designed by Brazilian architect Heitor da Silva Costa. But it was a Frenchman of Polish descent who sculpted the Christ statue’s head and hands.

With its panoramic view of the city from atop the 710-meter (2,330-foot) Corcovado hill in the Tijuca Forest, the site has become a must-see destination for over a million visitors each year.

Pope John Paul II was the first pope to bless the city at the Christ statue’s feet in 1980. In March, US President Barack Obama made a family trip there during an official visit to Brazil.

It was declared a historical monument in 1973 and in 2007, the statue was listed as one of the new seven wonders of the world.

“It’s the most amazing thing I have ever seen,” a child said after visiting the statue with a school group.

A Spanish couple posed nearby for a traditional picture in front of the Christ.

“I was so emotional that I almost cried when I saw him,” said Ana Maria Perez, who was visiting Brazil for the first time with her husband Julian after 45 years of marriage.

Her husband was impressed by the “spectacular” statue and its “gaze full of emotion, forgiveness.”

“We are a little closer to the heavens, on top of this wonderful mountain,” said Nurten Bigakli, a 48-year-old who traveled from Turkey. She held the hands of friends Inci and Selma to “pray for our families, our children.”