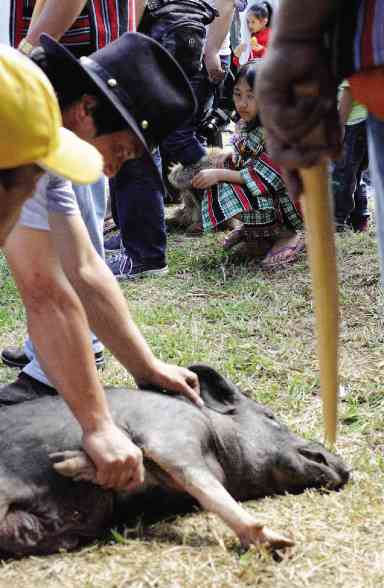 MEAT from native pigs is used in “kinuday” or “kiniing,” a Benguet delicacy. EV ESPIRITU

BENGUET, Philippines—In the olden days, Ibaloy and Kankanaey households in Benguet province preserved extra pieces of meat from a “cañao”(community feast) by salting and stringing the slabs.

Each day, the cook sliced off a piece of the preserved “kinuday” (“kiniing” to the Kankanaey), to be boiled with chicken, beans, “gabi” (taro) and other vegetables.

“There were no refrigerators then so this was how meat was preserved,” said Miriam Tiongan, an official of the provincial veterinary office.

These days, the best cooling technologies have made traditional meat curing irrelevant. Since 2010, kinuday, as preserved using the old ways, has been sold through the website, wwww.ygolottes.weebly.com.

Local veterinarians have also championed the traditional way of preserving meat because these are now value-added products for backyard hog raisers.

Only two commercial hog raisers dominate the market in Benguet, Tiongan said. Many more invest in backyard hog farms but are limited to a community market where demands increase only during weddings, funerals and gatherings that require indigenous rituals.

Kinuday has developed a market outside the traditional market that Sheryll Fernando, an employee of Benguet State University (BSU), discovered when she lined it up in ygolottes.weebly.com. She began the website in 2008 as a marketplace for accessories made of indigenous materials.

“One of my dreams is for tourists to seek out and take home kinuday or kiniing when they come to Benguet just like when we go to the Ilocos to buy bagnet,” Fernando said.

According to Leopoldo Lamsis, vice president of the Ibaloy group, Onjon ni Ivadoi, kinuday making has been evolving. The procedure is simple: Salt and smoke or sun dry the meat, although the amount of salt used and the curing period vary.

Kinuday could be cured in a day, though others prefer to do it for months, Lamsis said. “We should not make our kinuday too salty. It would not taste good. We should not oversmoke it because the meat becomes bitter.”

He said experience taught them that the meat gets the best flavor when it is strapped above a stack of burning eucalyptus wood and sprinkled with guava leaves and chesa leaves.

“We want to promote kinuday or kiniing to tourists visiting Benguet. Then we can venture into the international market someday,” Tiongan said.

The challenge is how to pass international standards regulating the export or importation of processed meat products, she said.

The prevailing price of kinuday is P400 a kilogram.

Fernando’s online business sells it for P450. “On the average, I get to sell around 15 kg of kinuday in a month online,” she said.