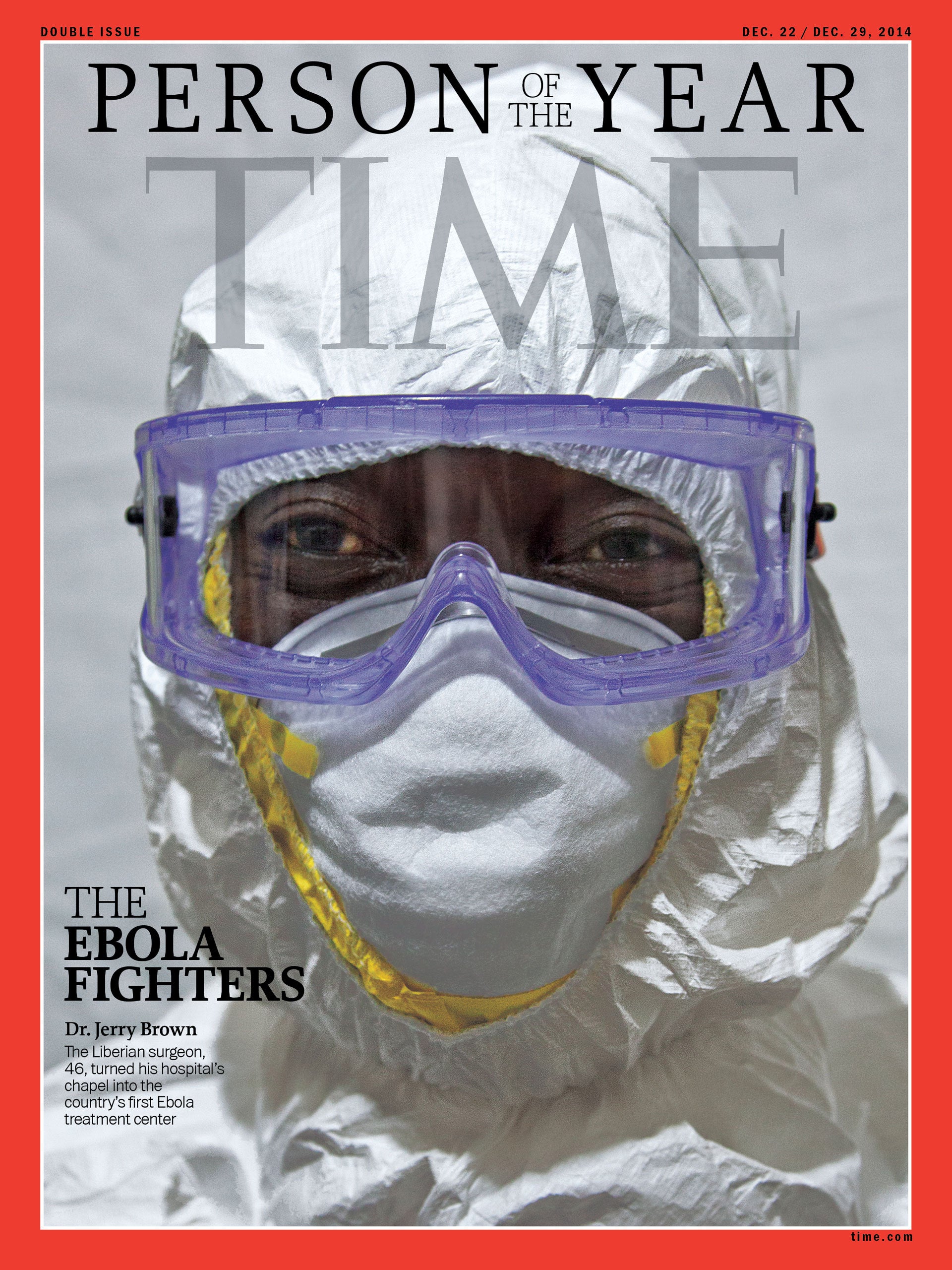 This image provided by Time Magazine, Wednesday, Dec. 10, 2014, announces the Ebola fighters as its Person of The Year for 2014. The title, according to the magazine, goes to an individual or group who has had the biggest impact on the news over the course of the previous year. The issue carries five covers, and here, shows Dr. Jerry Brown, the Liberian surgeon who turned his hospital's chapel into the country's first Ebola treatment center. (AP Photo/Time Magazine)

New York, United States–Time magazine on Wednesday named as its “Person of the Year 2014” the healthcare workers treating the Ebola epidemic, which has killed more than 6,300 people worldwide, in a move welcomed by the White House.

The hemorrhagic fever mushroomed from an outbreak into an epidemic in Liberia, Guinea and Sierra Leone, and there have been scattered cases in Nigeria, Mali, Spain, Germany and the United States.

“The rest of the world can sleep at night because a group of men and women are willing to stand and fight,” wrote Time editor Nancy Gibbs, announcing the prestigious annual title.

“For tireless acts of courage and mercy, for buying the world time to boost its defenses, for risking, for persisting, for sacrificing and saving, the Ebola fighters are Time’s 2014 Person of the Year.”

The worst ever Ebola outbreak has left more than 6,300 people dead worldwide, nearly all in Sierra Leone, Guinea and Liberia.

Health workers have been among the worst hit, with 340 deaths out of 592 cases.

The White House welcomed the accolade as a tribute to the “heroism and selflessness” of countless health care workers.

“The administration, including the president, could not be prouder of the brave men and women who’ve committed themselves to this effort in a foreign land,” said spokesman Josh Earnest.

“These are men and women who deserve international recognition, and today we are pleased that they’re receiving more of it.”

President Barack Obama has made a pointed effort to calm hysteria in the United States over how Ebola is contracted by welcoming survivors to the White House.

Nina Pham, a nurse who contracted Ebola while caring for the first patient diagnosed on US soil, said she was delighted to be part of the accolade.

“So honored to be a part of @Time Magazine’s POY!” she tweeted.

Pham, who was hugged by Obama at the White House after surviving her ordeal, and another nurse in Dallas became infected with Ebola while caring for Thomas Eric Duncan, who died on October 8.

Duncan was diagnosed after travelling from his homeland Liberia to the United States, where he was initially sent home from hospital.

The White House said the only way to bring the epidemic under control and prevent additional cases in the United States was to recruit and train more medical professionals.

‘Ebola is a war and a warning’

On Tuesday, the United Nations’ Ebola czar, David Nabarro, welcomed widespread progress in the fight against the virus, but warned cases were still surging in western Sierra Leone and northern Guinea.

He called for more foreign health workers and specialists in areas where the disease was still spreading quickly, as well as more treatment units and beds.

Gibbs said governments were not equipped to respond to the crisis, the World Health Organization had been in denial and snarled in red tape, and first responders were accused of crying wolf.

She paid tribute to the people in the field: those sent by charities such as Doctors Without Borders, as well as local doctors and nurses, ambulance drivers and burial teams.

“Ebola is a war, and a warning. The global health system is nowhere close to strong enough to keep us safe from infectious disease,” wrote Gibbs.

“And ‘us’ means everyone, not just those in faraway places where this is one threat among many that claim lives every day.”

The runners-up chosen by Time were protesters who took to the streets in the St Louis suburb of Ferguson to condemn the killing of unarmed black teenager Michael Brown by a white police officer.

Pope Francis is Time magazine’s person of the year