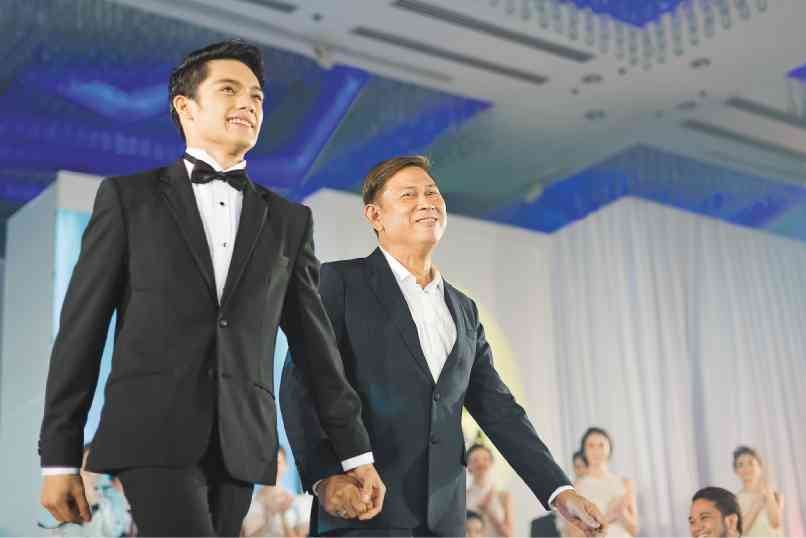 Getting teary-eyed is perhaps the last thing one expects to experience after watching a Frederick Peralta fashion show.

Known for theatrical and heavily embellished pieces, the multi-awarded designer seems more likely to shock his audience than make it cry.

However, this wasn’t the case recently as Peralta staged “Marry Me at Marriott,” his 30th anniversary show featuring 34 wedding gowns and a dozen tuxedos. 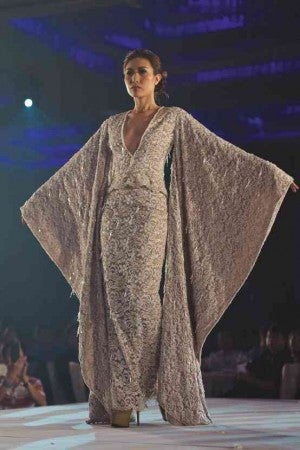 There wasn’t a dry eye in the grand ballroom as he and his 22-year-old son Kevin Peralta, one of the show’s models, walked down the ramp at the end of the show, holding hands and acknowledging the hearty applause.

Those familiar with the designer’s story and how Kevin came into his life savored the rare moment.

That night wasn’t exactly Kevin’s modeling debut for his dad. But it was the first time many people, including some of Peralta’s friends and clients, saw how Kevin had grown.

“The first time he modeled for me was when he turned four,” said Peralta. “He was a ring bearer in my Paco Park show. When he was 12, he also took part in a wedding show I did at Edsa Shangri-La.”

The designer asked Kevin, whom he adopted as a baby, to do it as “a favor for Papa.”

The young man, who grew up surrounded by his father’s dresses, loyal clients and team of dressmakers in Malate, readily obliged.

“I’m so proud to have ended the show with my son,” said Peralta. “The feeling, it turned out, was mutual. Kevin said that he was so proud of me, too. I really felt the love.”

But even without that priceless father-and-son moment, many of Peralta’s pieces—20 from his previous collections—looked uncharacteristically subdued, even romantic.

He used classic fabrics such as lace, chiffon, soft tulle, duchess satin, silk gazar and Mikado silk in ivory, ecru and even black. Peralta was able to fully showcase his range and maturity as a designer. 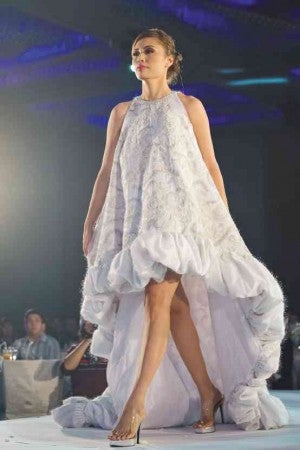 Except for a few pieces, he toned down his trademark heavy beadwork in favor of more subtle embroidery and appliqué. He also played with volume and proportions in a number of looks.

But it wouldn’t be a Peralta show without the occasional fireworks in the form of painstaking fabric manipulation, beadwork and layering.

Certain gowns, for instance, had tiered billowy skirts, ruffles and flounces, while others were either embellished with tulle bows and sequins or had hanky-drop and petal effects on sleeves and shoulders.

In his homage perhaps to Pitoy Moreno, the designer also showed a modernized ensemble of gold opera coat over a beaded ivory halter—a “close-open” number, the term to describe a model’s dramatic opening of a cloak, associated with the ’50s-’60s era of fashion shows.

Peralta did a bit of cross-referencing by using semibeaded Spanish lace to fashion an Oriental-inspired gown with a plunging neckline and a pair of exaggerated trumpet sleeves that Maggie Cheung’s character in one of those Chinese costume fantasies would have died for.

“I’m proud of every piece I did in the past,” he said. “But I do have my favorites.”

They include a column with book-leaf details on the skirt, a sleeveless and embroidered number with sheer overlay, a black gown with peplum and contrasting white embroidery, and the “close-open” look of a gold opera coat. 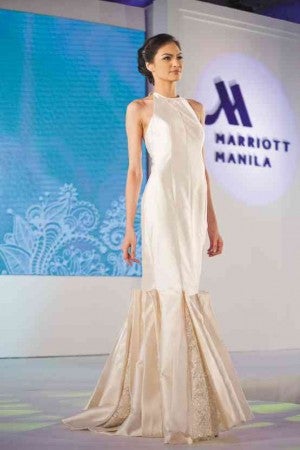 Instead of doing an all-new collection to mark a career milestone, Peralta, encouraged by director Robby Carmona, showed a retrospective of some of his best and iconic works. He beefed up his women’s collection by producing 14 new looks.

“I’m honored and at the same time humbled by their love and friendship,” he said.