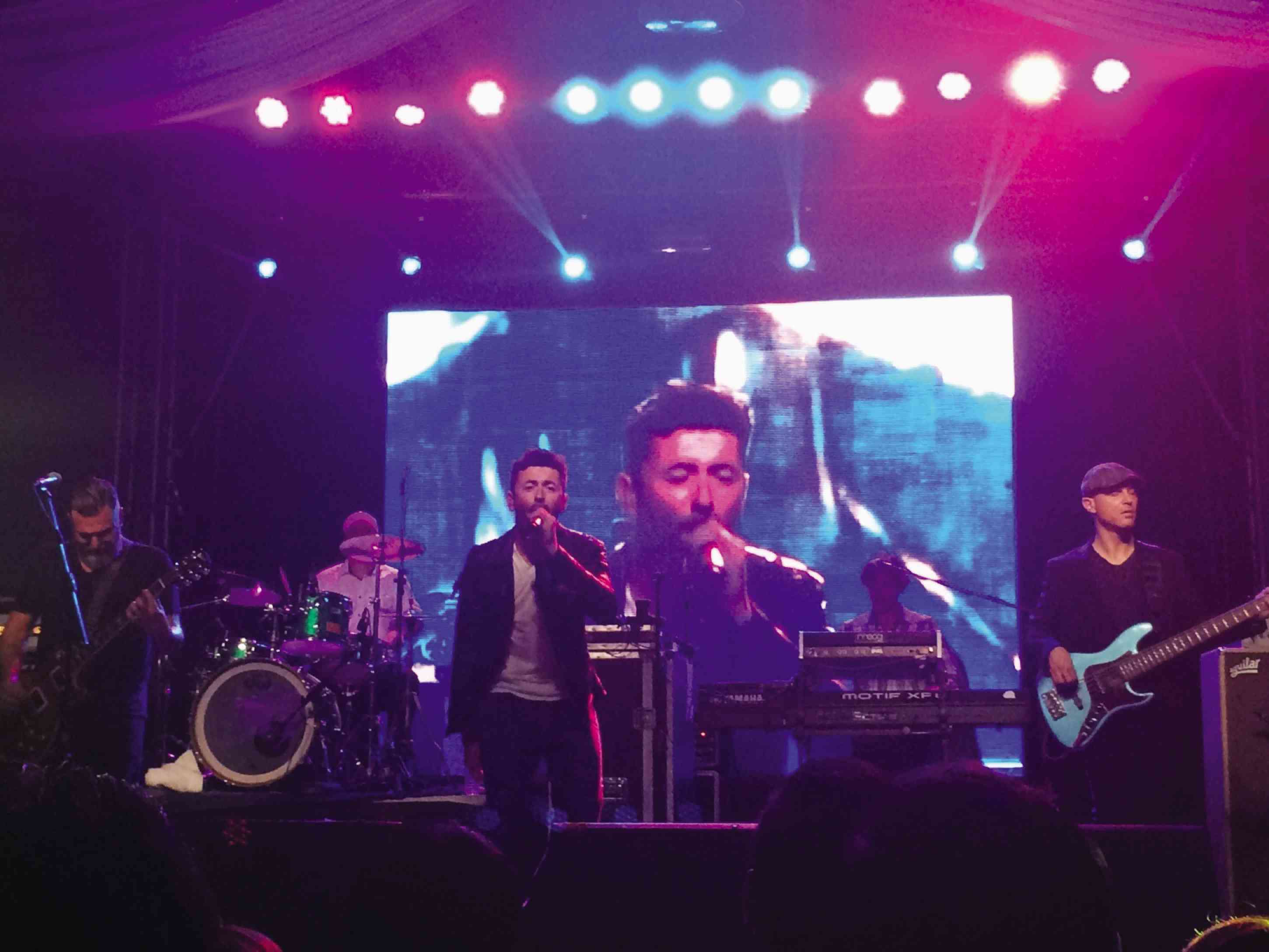 Dishwalla vocalist Justin Fox wasn’t kidding when he said that this was a show that wasn’t supposed to happen. The California-based alternative rock band was all set to perform as the headliner at last month’s La Union Soul Surf music festival, which was cancelled due to inclement weather.

Then, Typhoon “Ruby” (international name: Hagupit) blew into the country just as the band came back to hold its rescheduled show in Manila. This was compounded by drummer George Pendergast’s injuring his foot before flying here.

Thankfully, the show pushed through at Megatent Libis in Quezon City last Dec. 6, and made a lot of ’90s kids happy.

Local acts Autotelic, Brisom and Blue Jean Junkies kicked opened the five-and-a-half-hour show, followed by Up Dharma Down and Wolfgang.

The band launched into the fiery, high-energy track “Charlie Brown’s Parents” from its platinum-selling 1996 debut “Pet Your Friends.”

In contrast to the grittier, guitar-driven sound from its early days, Dishwalla took on a mellower, more introspective approach at the turn of the millennium. This was evident in the band’s well-balanced setlist. Frenetic, funk-laced tracks “The Feeder,” “Haze” and “Give” from the album “Friends” were tempered by rock ballads such as “Healing Star” from the sophomore album “And You Think You Know What Life’s About,” as well as the gut-wrenching radio hits “Angels or Devils” and “Somewhere in the Middle” from 2002’s “Opaline.”

The undisputed highlight of the night was the heartrending three-song acoustic set. True to its reputation as one of the best live bands of the ’90s, Dishwalla proved that it sounds equally amazing and cohesive whether amped up or unplugged.

The band’s soaring rendition of the hard rock ballad “Collide,” from its fourth eponymous album, flaunted Fox’s ability to nail those mournful wails that his predecessor was known for.

The band members’ faces simultaneously broke into huge grins when the audience started singing loudly to soulful “Opaline” love songs “Home” and “Every Little Thing,” which made for a hair-raising moment. As expected, the band capped off the night with “Counting Blue Cars.”

The band climbed back onstage for a two-song encore—a cover of Oasis’ “Supersonic” and “Moisture,” another high-energy track from the first album.

The band members were gracious enough to sign autographs and mingle with fans after the concert. The only thing that literally dampened our spirits was the shocking discovery that our cassette copy of “Pet Your Friends,” which was bought at a legit record store in 1996, turned out to be bootleg.

Alexander and Cravens, both founding members of the band, explained to this mortified writer that Dishwalla’s record label didn’t know about the existence of such copies of the album, which most likely meant that it never granted distribute license in the Philippines.

Though the members added they were still grateful that their music got to reach this part of the world, the incident from the meet-and-greet has forced us to “verify” our collection of cassette tapes from the past and made us think twice before having these signed by the artists.

Nevertheless, the band got a good laugh out of it, and we went home with a potential collector’s item and a very satisfying trip down alt-rock memory lane.

This Manila tour marked the last stop of the band’s tour for this year, and its members clearly made sure it was one show to remember. Critics might have dismissed Dishwalla as a one-hit (“Cars”) wonder but the fans that filled Megatent that night would firmly say otherwise.

“The crowd was great—we loved the acoustic set where we could hear everyone singing along. It was amazing! Can’t wait to come back,” Alexander told Inquirer Super after the show.

If the band does find itself back in our shores someday (weather permitting), it would be nice to hold an out-of-town gig as originally planned to give the fans in the provinces another chance to see Dishwalla rock out in the flesh.

We wouldn’t mind hearing more unplugged versions, including the steady, languid “Opaline” and the melancholy “Until I Wake Up.”

Hopefully, the band would have also released a new album that shows who Dishwalla is now, new lineup and all.