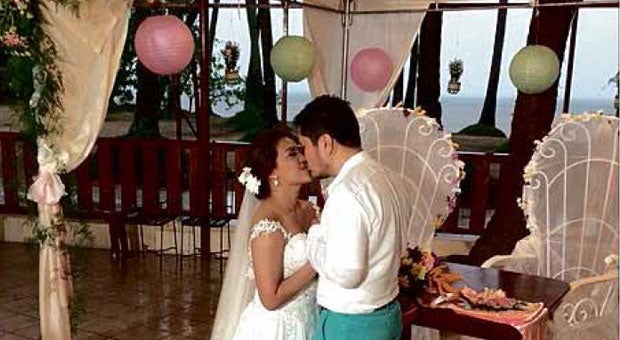 CATHEDRAL of trees and sand was Plan A, but Ruby forced Jo Anne and Francis and their guests to retreat indoors for Plan B. PHOTO FROM OLSEN RACELA’S INSTAGRAM ACCOUNT

Ménage à trois: Jo Anne, ‘Ruby’ and me at my wedding

“I’ll chase away the storm if I have to,” I promised my then girlfriend just as midnight was creeping up in Batangas province, bringing with her frisky winds, quiet drops of rain and a rumor of a typhoon closing in on the beach-lined town of San Juan.

It was easy for one, lying on the floor of a nipa cottage, the evening sky still bearing perceptible traces of moonlight, to be lured into such grand pronouncements. But with weather trackers shredding the flimsy fibers of hope we were holding on to, I sounded more reassuring than romantic.

This was Dec. 7, Sunday, the night before our wedding day. And since the weather is apparently more prone to lazy, sexist stereotypes than mediocre writers are, it was sending in a “woman” to ruin that special day.

Even as forecasters hinted at Typhoon “Ruby” being a tempestuous bitch, my fiancée and I tried to latch on to our optimism. When we awoke to a steady downpour, we decided to look instead at the rays of sunlight that had managed to bore through the thick, gray clouds. When we tapped on our smartphones to check on the latest weather updates, we chose to monitor bureaus that provided the most positive storm route.

“Everything will be perfect,” we told ourselves. After all, love was supposed to conquer everything, right?

By midmorning, even while still harboring hope of sunshine, we moved to Plan B. In the beach wedding that my fiancée, Jo Anne E. Padiernos, meticulously planned practically single-handedly down to the tiniest detail, we would be solemnized just before sunset—our first kiss as husband and wife happening against the backdrop of a spectacular gold-and-red sky. She would walk through a sandy aisle, with guests wearing shades of mint and blush flanking her. I would receive her at the driftwood altar of our chosen “cathedral,” whose walls were rows of trees whose branches and leaves collided in the middle to form the roof.

We would then light sky lanterns tethered to bamboo poles for safety purposes and celebrate under the moonlit, starry sky with sparklers, reggae music, dinner and dancing.

Plan B was all that but done indoors, minus the sky lanterns. It was still going to be awesome.

But then, a little past noon, one of the wedding coordinators approached me with words uttered in a tone of gravity I could not forget: “Sir, we have a problem.”

The local government of San Juan had issued an evacuation order and would forcefully enforce it in the resort haven of Laiya. Ruby was expected to make landfall early in the evening and officials were not taking any chances. There would be no exceptions.

Immediately, I sought out the resort owner, Neil Siy, and asked him what this meant.

“We have to cancel the wedding,” he said apologetically.

I was stunned. The first thing I did was to tell the coordinators to make sure that no word of this was to reach Jo Anne, who was getting prepped by makeup artists that time. Then I asked Neil to take me to the team that would enforce the evacuation. He phoned the barangay captain and we agreed to meet at his place.

On the way there, my heart sank. The streets we passed were empty. The other resorts were deserted and padlocked. The evacuation had not only started, it was close to being finished.

I met with the barangay captain, an aide from the mayor’s office and a member of the evacuation team. Right off, I told him our situation. And just as quickly, he said he had no choice but to cancel the wedding.

I understood his situation. But I asked him to consider mine. Jo Anne had dreamed of this day for so long and had wrestled with incompetent and rude-texting suppliers in the months leading to this. She agonized, cried, argued and negotiated until she got what she wanted. And we were on the verge of seeing all her hard work go down the drain.

I told the officials that I could stand my ground. I could compel the resort, Laiya Coco Grove, to fulfill our signed contract. Local officials would be well within their rights to forcefully evict us from the danger zone, but then it would be too public a mess, with guests already in the resort.

So I begged for a workable compromise.

The barangay captain sighed, huddled the evacuation team and said maybe we could finish just the ceremony, have the resort staff pack the reception dinner into takeout boxes that we could hand to guests so they could eat on the road.

Neil said it was doable. I agreed, but I offered a counter proposal. What if we could start earlier than scheduled? If we could compact the ceremony, would it be possible to still push through with the reception program? Again, the officials huddled. The barangay captain relented. “As long as you leave an hour before the storm’s expected landfall,” he said.

I sought one more concession. All our guests came in cars and they could leave in a hurry after the program. Plus, of the 60 or so guests we had invited, only close to 50 arrived. Neil’s concern was his staff, which he wanted to send home as soon as possible. I told him that since there were fewer guests, maybe he could send home his employees even before the wedding, that way we could maybe buy an additional 45 minutes.

“That’s possible. I’ll let the female staff members off. I’ll ask for a few volunteers to stay. But after the 30-minute extension, we’ll play it by ear. Any hint that the storm would make landfall earlier than expected, we cut the program short,” Neil said.

We drove back to the resort and I rounded up the coordinators and the wedding crew and apprised them of the situation. I asked one of the coordinators to gather the guests at a function room so I could address them. But before that, I dropped by the room were my bride-to-be was getting ready. I told her we would need to shorten the program a wee bit and that we had to start early, without mentioning how close we came to getting our wedding canceled.

I then walked to the function room and addressed the guests. I told them that we needed to be on the dot with the compacted schedule the coordinators worked out. I wasn’t supposed to say anything else but I felt I needed to ask a huge favor.

“Please, when you go out there, make Jo Anne feel that this was exactly how we had planned it,” I asked of them. “Give her your warmest greetings, your sunshiniest smiles and make her feel how happy you all are for her. You could triple the storms today and this would still be the happiest day of my life. Please help me make her feel the same way.”

I felt my voice starting to crack but I didn’t want anyone to notice. Mustering every drop of calm, I took a piece out of the vow I had prepared for the ceremony and shared it with them: “I want to make sure her heart is never broken and today, I’ll need all your help.”

‘Kick up a storm’

Later, to close friends, I gave a final pep talk: “When life deals you typhoons, kick up a storm of a party.”

When people talk of perfection in weddings, they speak of perfect sermons, perfect food, perfect programs and perfect receptions. So little is said of perfect guests. That day, you couldn’t find more perfect guests. Everyone was a piece of the sun, converging under a storm-threatened roof, providing the light and warmth that we had hoped for.

And yes, we got our wedding. We exchanged our vows. We shared our first kiss. There was reggae music. There was dinner. There was a little dancing. There were sparklers. There was a photo booth. There was time for guests to ring bells for more kisses.

About two hours after the last guest had left, Ruby finally made her howling landfall. The torrent she sent as an advance party may have wiped off our outdoor ceremony and some of the games we had hoped to play with our guests. But it did not wipe off the happiness we felt over finally having our special day with the people we wanted most to share it with.

Most of all, it did not wipe off the stars. They were all collected in the smile that greeted me when I finally took Jo Anne’s hand at the end of her walk through the aisle.

The wedding that survived the 2013 storm