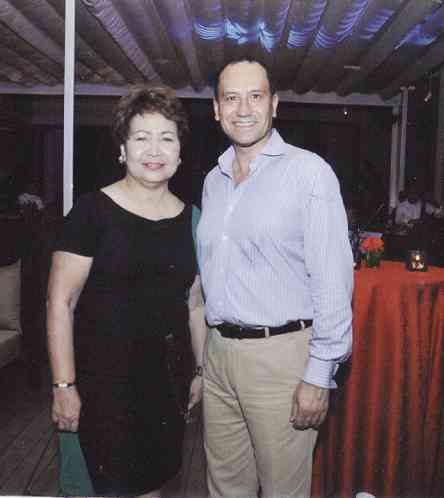 The Shangri-La’s Mactan Resort and Spa held a grand opening of its new main outlet, Tides, with a record attendance by Cebu’s luminaries. Presiding the dressy event was the resort’s general manager Marco Vazzoler who welcomed the guest of honor, Lapu-Lapu City Mayor Paz Radaza.

Jude Bacalso hosted the program, a highlight of which was a demonstration by sand artist Brian Crespo who invited Mayor Radaza to try her hand at it, literally.

The new Tides offers a comprehensive array of international cuisine with special focus on local specialties. The Cebu lechon is roasted right before your eyes. Mainstay at the dessert area is the chocolate fountain.

Shortly after this it was the turn for the Radisson Blu Hotel in Cebu City to host a grand event to relaunch its Feria outlet, likewise attended by a record crowd. Doing the honors was general manager Nishan Silva who introduced the hotel’s five main chefs who henceforth have showcased their gastronomic prowess.

Executive chef Frederic Cyr is French-Canadian, born in Quebec, where at age 12 he learned how to cook with his famous father, Renaud Cyr, at the family restaurant.

Executive pastry chief Allan Barrios comes from a family of pastry chefs. His father and four brothers are into baking. He is responsible for the scrumptious desserts at Feria, featured on a ferris wheel. Try his famed croissant pudding.

Chef Peter Yeung is master of Cantonese cuisine. Born in Hong Kong, for 20 years he has churned out wonders from a stack of recipes that have been in his family for generations.

Indian chef Nira Tiwari has introduced his country’s culinary fare to Cebu. It is flavorful, colorful and definitely spicy though he has toned down some dishes, which means less hot and more edible.

Executive sous chef Randy Origenes learned to cook from observing as he washed dishes. His contribution to the Feria buffet ranges from delicious Filipino dishes to imaginative Italian fare.

Cielito Obiña Elliott entertained friends at her well appointed apartment at Buenaventura Place in Guadalupe, Cebu City, in what turned out to be a delightful afternoon musicale. Present were Amelia La O, Tina Ebrada, Chinggay Utzurrum and Maida Veloso.

Celi was born in Cebu and learned how to play the piano from her sister Angeling O. Bernedo. She studied Music at University of Santo Tomas and later further studied in United States.

She embarked on a career as a concert pianist, and also as a teacher at an exclusive girls’ school in Baltimore, Maryland. She married Don Elliott who also taught at the same school.

During the 1970s and 1980s Celi frequently came to Cebu performing solo or in duo recitals with Reynaldo Reyes who was also based in Maryland. Those were unforgettable performances at the auditorium of Colegio de la Inmaculada Conception under the patronage of Esperanza Labucay Cabahug.

Celi retired some years ago and her visits to Cebu became more frequent, touching base with relatives and a legion of dear friends. She took up residence at Buenaventura Place and got herself a piano where she rehearses daily. It has a room all to itself.

At this exclusive gathering she told them she’d play compositions by Chopin, one of her favorite composers. She told them why.

“Chopin wrote mostly for piano,” she said. “Well, the piano is enough. It is everything!”

The first piece was Ballade No. 1. “There are actually four,” Celi explained, adding, “It evokes a tale, giving life to the knights at King Arthur’s round table.”

Then she played some “etudes,” written by Chopin for students. “Thy are that not easy at all, “noted Celi,” as a matter of fact they can be challengingly difficult.”

From Book I of the etudes she played No. 5, known as the Black Keys Etude; No. 12, the Revolutionary; and No. 3 which as Celi says, was named “No Other Love” by Hollywood. Celi said we could hum or sing along as she played.

From Book II she played the Butterfly Etude; one that was a favorite of her late husband Don; and the “Ocean Prelude,” considered as the hardest of all.

For an encore she obliged with a work written by her late sister who died quite young. ” I had to play a Cebuano air,” Celi said, and went into a relation of memories that stretched back to prewar days of her childhood.

“Tina, why don’t you play something?” Celi asked Tina Ebrada who protested that lack of practice prevent her fingers from playing classical works. But accomplished as she is, Tina sat at the piano, and tinkled away a score-perfect jazzy “It Had to be You.”

How does one say it in Cebuano? Some one asked. The answer: “Ikaw g’yud!”