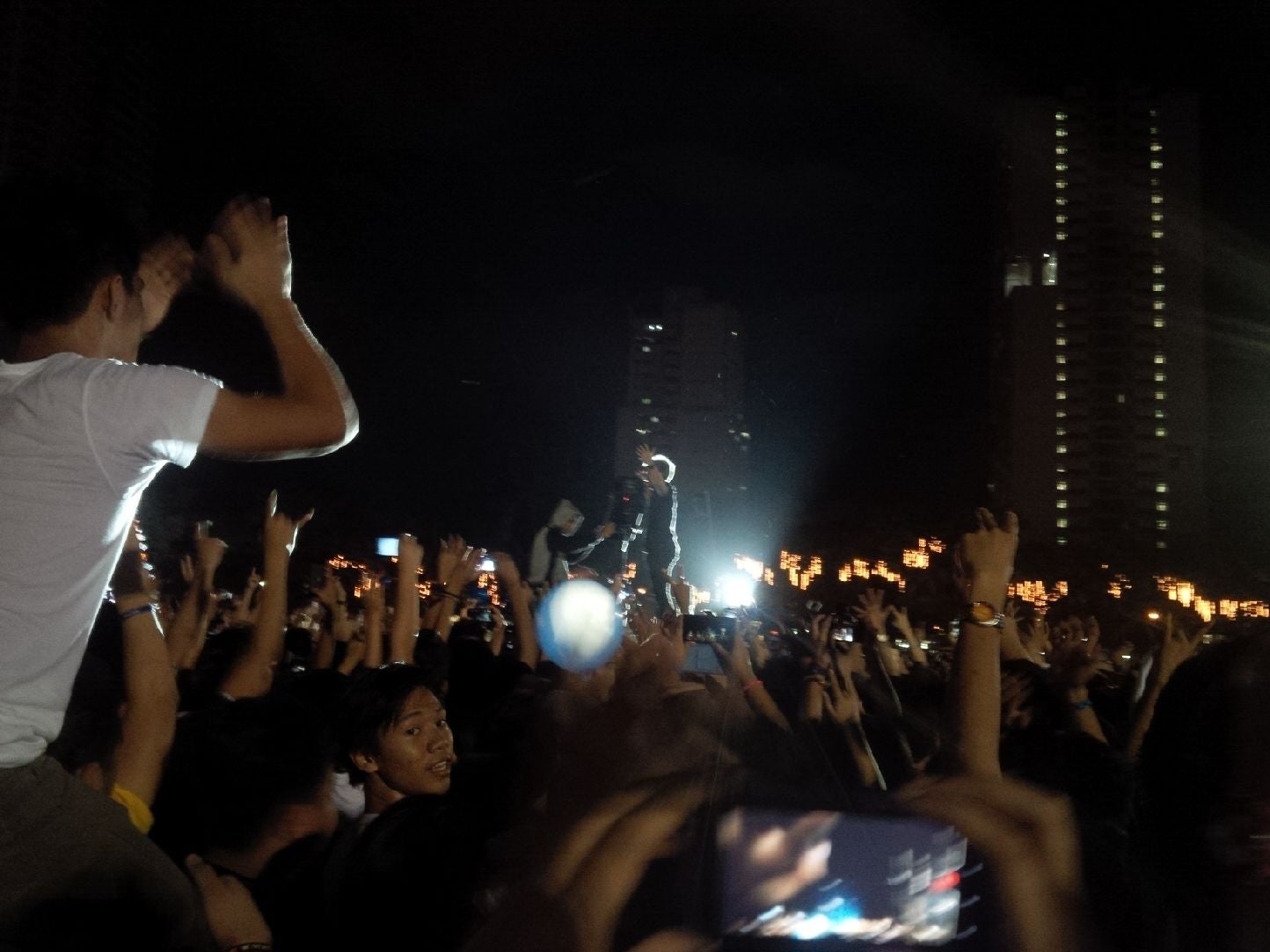 MANILA, Philippines—The yearly Paskuhan of the University of Santo Tomas drew to a close with a couple of new things that made it quite different from the past editions. This year’s theme was “Paskuhan Full Blast.” But was it really a blast?

According to a Tomasinoweb report, the UST Central Student Council decided to “innovate” and make changes to Paskuhan this year to add new things to the usual tradition of the festivity.

Here is the #InquirerSeven list of the changes we’ve observed in Paskuhan 2014 last Thursday, December 11, 2014:

Before the Electronic Dance Music (EDM) bug swept through the Philippines like a locust plague, making España one of its pit stops, the Paskuhan was mostly a rock-and-roll event with the country’s top bands riffing through their guitars, banging their drums, and belting their tunes to the delight of the audience.

During this year’s Paskuhan, rock bands were mere front acts to the EDM disc jockeys. In between the performances of Paraluman, Silent Sanctuary, and Spongecola, DJ Ace Ramos, DJ MC Pao and DJ Callum David played some EDM for the young crowd.

While most guests approved of infusing EDM in the Paskuhan concert lineup dominated by local bands, some Thomasians thought it was a bad idea.

“Compared to Paskuhan last year, mas boring ‘yung ngayon (this year was quite boring),” Jesusa Balani from the College of Science told INQUIRER.net.

A six-minute pyromusical display does not exactly pique any Thomasian alum’s interest, especially if that alum witnessed the 2010 fireworks display, a few months before UST celebrated its 400th anniversary.

This year, the Paskuhan pyromusical didn’t seem as spectacular as that of previous years. Paskuhan’s best fireworks displays usually made spectators complain of getting a stiff neck. A six-minute display definitely does not have the same effect.

Swedish national Marcus Anderson, who was invited to the Paskuhan by his Thomasian girlfriend, enjoyed it as well.

“Paskuhan was great. I really liked the fireworks,” the 20-year old Anderson said.

As part of the festivities, students wore glow sticks in traffic light colors based on their relationship status.

Green, yellow and red. While these colors certainly did not help traffic during the Paskuhan, they certainly gave off a different kind of vibe during the event.

College students who want to get into some action only need to look at those bright arm bands as green means “single,” yellow means “it’s complicated” and red means “taken.”

It’s officially the Christmas season once people see the UST campus all lit up.

But seeing UST adorned with bright Christmas lights and a huge Christmas tree was new to Medicine student and former Atenean Carissa Lim. She was delighted, to say the least.

“I was impressed by the UST lights; the effort that went into it,” she said.

5. That big and loud blast in the Quadricentennial Park fountain

The Quadricentennial Park fountain usually spews intricate water displays in the afternoon and well into the closing hours of the school day.

It’s usually a “peaceful” affair but during the Paskuhan, just before the fireworks display started, students heard a loud bang. Some were drenched as the fountain released a geyser-like explosion of water.

All was well though as some students enjoyed the incident. Biochemistry student Jackielyn Gay, who was drenched at the fountain with her friends, said, “this is to celebrate the end of classes this year and start of our vacation.”

The Agape, which is a fairly young tradition of the 23-year-old Paskuhan, ensures that tons of free food are given to students and University staff just before the yearly spectacle.

It was a gastronomical dream, as UST gave out pizza, chicken, pork and pretty much every kind of edible meat.

Agape, which is a Greek word for “brotherly love and charity,” was first introduced during UST’s Quadricentennial Celebration in 2011. Living up to its Catholic University of the Philippines title, UST decided to make the agape a part of the Paskuhan.

7. The coming of Pope Francis

Despite the changes and the complaints, the Paskuhan is still about the celebration of the University’s Yuletide spirit.

This year’s theme was “Pagidiriwang ng Pagmamalasakit: Tomasino Kaisa ni Papa Francisco ng Simbahan at Pasko,” as UST calls on the Thomasians to take inspiration from the leader of the Catholic Church, Pope Francis.

While many consider Paskuhan a massive Christmas Party, for UST officials, it is their way of reminding students to be one with Pope Francis in living under the guidance of the Lord.

For UST Medicine student Dan Quinio (and for most alumni), the traditional Paskuhan will always be better.

“The Paskuhan before had a happier crowd. The fireworks display before were longer. Ngayon, ang masaya na lang ‘yung company (Now, you only enjoy spending time with friends),” Quinio said.

But Timothy Aquino, a UST Faculty of Arts and Letters almuni, said innovating Paskuhan is not really much of a problem as long as it preserves the “Noche Buena” ambiance for Thomasian students, their friends and families.

“The utter point of Paskuhan, for someone who has been celebrating it for almost ten years, is just the gathering for a unified Christmas celebration,” he said.

“And I think this is what Paskuhan really is about. Not the lineup of events.”

The 22-year old’s message to naysayers: “Just like how a family grows, so is UST’s Paskuhan. It will forever be dynamic.”

Read about how the UST Paskuhan had to be postponed because of Typhoon Ruby.