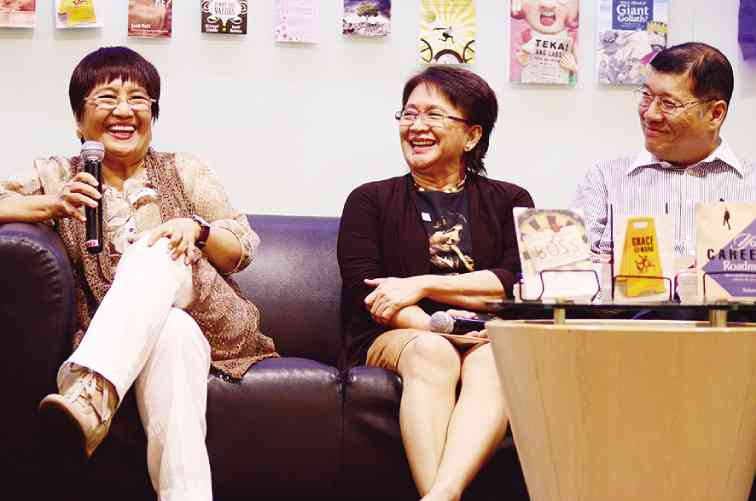 During a general launch of titles by OMF Literature Inc., it was easy to sense the positive aura of the authors, illustrators and officials in the room, and that if it were to rain hard, as it did before that force the launch to be rescheduled today, it was certain this time that the words written in those books would be heard come hell or high water.

OMF Literature CEO Aleks Tan would certainly not have it any other way as he said he understood the hard work that authors and illustrators go through just to finish a book. Tan described them as brave men and women who had taken on the challenge of putting into words the message God had placed in their hearts.

“I believe that writing is an act of bravery,” Tan said. “In order to connect with readers, a writer has to make himself vulnerable. And that, inevitably requires sacrifice.”

He added that the writing that the authors do is also an act of rebellion, rebelling against the established patterns of thinking and living that run askew with the eternal principles of scripture.

“It’s very difficult, I realize, to find time to write,” Tan said. “And so we thank the families as well for allowing these writers to have time to write.”

Tan also cited the talk given by 2014 Scholastic Asian Book Award Winner Sophia Marie Lee during the Manila International Book Fair, which brought up the difference between children in low-income families and those that belong in middle to high-income ones.

Statistics disclose that children in middle to high-income families have an average collective reading time—that is the time spent before they start schooling—of 1,000 to 1,500 hours as compared to those from low-income families that get only 25 hours.

“This issue is close to our hearts because we have a children’s book in print called ‘Hiyas’ and reaching the youth is an integral part of OMF Lit’s mission,” Tan said. “Children need books as part of their development. And they need adults to read the books to them to have someone share with them the joys and experience of reading. In recent years, we have worked with the Department of Education to provide children’s books to school libraries in far-flung barrios in the country.”

Books for the youth that were launched were “May Powers Ka to be #SuperEpic” by Mighty C. Rasing, “Lovestruck: Sakit Edition” by Ronald Molmisa, “Boring ba ang Bible Mo?” by Rei Lemuel Crizaldo, and “Pinoy Big Values” co-authored by Molmisa and Crizaldo.

OMF Lit also launched five new titles for women: “God’s Whispers to a Woman’s Heart” by Cindi McMenamin, “One Year Mini for Moms” by Ellen Banks Elwell, “What Women Can Do When Life Falls Apart” by Luisa Reyes-Ampil, “How to Keep Your Hubby Happy” by Marlene Legaspi-Munar, and “Ikaw na ang Maganda” by Malu Tion gson-Ortiz.

Eight titles on Faith were launched: “The One Year Worship the King” by Christ Tiegreen, “What did Jesus Really Mean when He said Follow Me” by David Platt, “Not by Sight” by Jon Bloom, “Who is Jesus According to the New Testament?” by Dr. Isabelo F. Magalit, “Why Does God Allow Disasters?” by William B. Girao, “Conversational Evangelism” by Norman & David Geisler, “365 Pocket Promises from the Bible” by Amy E. Mason and Ronald A. Beers, and “Now that I’m a Christian” by C. Michael Patton.

For those in the workforce there are four new titles that give guidance on how to be more than just someone who comes to work to earn a paycheck whether as an upstart or as a boss: “Crazy Busy” by Kevin DeYoung, “Grace at Work” by Grace D. Chong, “Your Career Roadmap” by Nelson T. Dy, and “Now That You’re Boss by Yay Padua-Olmedo.

E-mail the author at [email protected] Find him on Twitter @dxmatilla and visit his blog www.thedxmatillashow.blogspot.com