Artists weigh in on the year that was | Inquirer Lifestyle ❮ ❯ 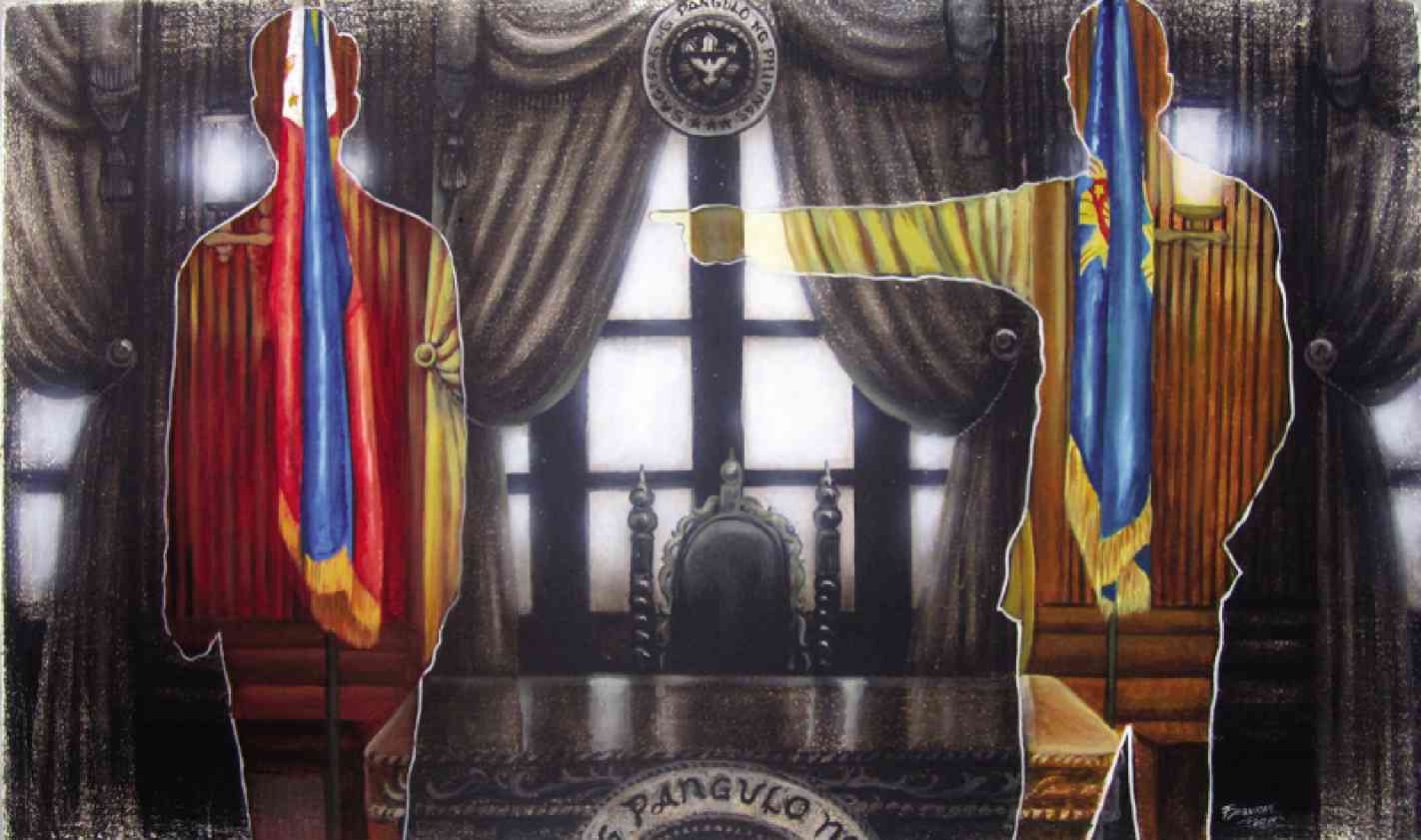 Artists weigh in on the year that was

The end of the year affords us the gift of retrospect, the opportunity to look back and learn a lesson or two on how best to move forward.

In “Continuum,” on view at the Ayala Museum Artist Space beginning Dec. 19, Gallery Big assembles 40 of the country’s top artists to weigh in on the issues of the past year, harvesting an eclectic collection of works that ruminate upon social events as they collide in the intersections of past, present and future.

What emerges, on the one hand, is an interesting snapshot of the Filipino condition as its stands at this juncture; and on the other, a diverse assortment of visionary projects that point to alternative futures.

Xander Calceta’s “I told You I’m Not a Cat” revisits Hello Kitty’s much talked about identity crisis and in the sober domesticity of its composition casts a satirical shadow upon the global panic that ensued. Icons, Calceta’s work reminds us, serve as valuable symbolic currency in the affective economies of a homogenized global culture and their collapse have profound and traumatic consequences on our collective psyche.

As expected, many of the participating artists responded to Continuum’s challenge by drawing from the rich arsenal of Philippine social realism. Thomas Daquioag’s “Ang Palasyo,” literally points the finger at the country’s top leadership, calling attention to the principle of command responsibility. Rather than point to its past or current occupant, the work casts its critical eye upon the very office, signifying the continuity of its task and legacy.

Buen Abrigo likewise takes on the issue of command but locates his project in the global politics of territorial disputes and conflicted allegiances. The artist positions nation and its subjects on contested waters not as defiant participants but as unwitting pawns at the mercy of Empire. His portrait of an island implicates spatial power plays and the insularities of colonial subjugation.

Other artists’ works in the exhibition touch upon the plight of the Filipino working class. Michael Cacnio’s “Work-life Balance” is a playful but cautionary sculpture signifying that the fruits of labor is a harvest that lies only at the end of a precarious tightrope.

Siefred Guilaran, meanwhile, studies the state’s labor export program and sees the future as one big “Sapalaran,” a risky wager taken with nothing but faith in the Great Unknown.

“There’s a Buwaya Making Ligo-Ligo in the Bathtub,” Jun Balasbas’ contribution to this storied conversation, is a welcome comic relief. The work, rendered in the artist’s signature comic strip style, demonstrates how Pinoy humor negotiates the distress wrought by corruption.

Franklin Cau’s take on the same subject is metaphorical. In “Pork Barrier” he revisits the controversy of state discretionary funds and implicates the complex of corruption in the widening gap between rich and poor.

International artist Clarence Chun, fresh from his sold-out show at this year’s ManilArt, lends his voice to the exhibit and contemplates on the humbling force of the seas, Chun honors the Tacloban of his youth in ‘But Everything Looks Perfect from Far Away,’ at the same time hinting at the illusory properties of the visible.

Many of the other artists take the metaphorical route in their works, choosing instead to highlight enduring themes in non-literal terms. One way or the other, these works, however discordant in its overall tenor, is nonetheless a unified interrogation of the temporal order of things. Time—perpetually moving forward, forever irretrievable but for its residues in the domain of memory—is a paradox.

Marcel Antonio’s “Festina Lente—Make Haste, Slowly” celebrates the irony of time and its fallibility in the hands of those who actively seize the moment. Indiscretions have the potential of being glitches in the matrix of all that is considered status quo, non-problematic and universal.

“Continuum” is an ambitious project envisioned as an annual exhibition with a social realist bent, a celebration of a Filipino art practice endangered by current market proclivities for the global and contemporary. This first edition manages to takes a few humble steps towards that grand vision. To be relevant and sustainable, future installments will require the participation of other social realist luminaries, more women artists, and multidimensional expressions.