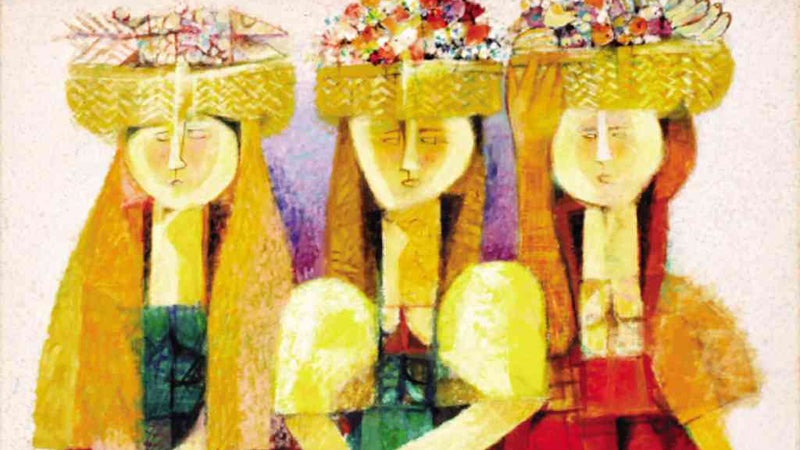 León Gallery continues to set a number of world records in its yearender Kingly Treasures Auction. The auction featured 155 pieces of artworks, antiques and objets d’art that came from distinguished provenances.

Breaking León Gallery’s own record for a Mauro Malang Santos artwork was “Tres Marias,” which fetched P3.97 million. It beat the artist’s “Mga Kendi,” from the collection of Carmen Guerrero Nakpil, which was sold for P2.56 million in the previous auction.

Also setting a new world was Oscar Zalameda’s oil on canvas “A Good Catch,” which fetched a staggering P3.7 million, was a little more than twice the amount his “Market Scene” was sold for during León Gallery’s mid-year auction this year.

Kiko Escora’s 2002 “Sanguine Menagerie,” which fetched P1.4 million, broke the record set by Sothebys for the artist’s “Portrait,” which was sold at P1 million in 2008.

Moreover, Manuel Ocampo’s 2011 oil on canvas “The COmpensatory Motif of The Libidinal Economy of a Painter’s Bad Conscience,” was sold for P1.28 million. It surpassed Philips de Pury and Company’s record for Ocampo’s “Karl Marx Ejaculating” in 2007.

For sculpture, Solomon Saprid’s “Tikbalang,” signed and dated 1973, was sold for P3.5 million. This broke León Gallery’s own record for his “Fisherman,” which was valued at P2.57 million.

One of the highlights in the collection was Anita Magsaysay-Ho’s 1949 acrylic on wood “Women with Jars,” which was auctioned off at P9.9 million. Another of her piece in the lot, “Fish Vendors,” was bought for P1.16 million.

Sanso’s surrealist and supernatural rendition of bouquets and flowers, depicted in his 1965 oil on canvas piece, was sold for P1 million.

Another noteworthy piece was Hernando R. Ocampo’s oil on canvas “The Vortex,” signed and dated 1962, which was sold at P6.77 million.

Considered as the artist’s most sensational piece, and one of the most expensive art pieces in the auction, José Joya’s 1960 oil on canvas “Labyrinth” was sold for P8.76 million.

A 1996 acrylic on canvas by Navarro titled “The Barrier Now Cleaven” was sold at P1.4 million.

The Atay Cabinet, created by the country’s foremost cabinetmakers Ah-Tay and son Eduardo, was sold for P1.98 million. According social historian Martin Imperial Tinio, the cabinet was most probably commissioned by Francisco Reyes from the Taller de Carpinteria of Eduardo Atay.

Meanwhile, the Dellota Comoda with Kneeler and Altar, which was an unusual piece of furniture and perhaps the only one of its kind in the country, was declared sold at P93, 440.

One of the sought-after pieces in the auction was the rare and unusual carved kamagong cabinet. It was sold for P876,000.

“The entire aparador is made of boxwood, except for the paneled doors and the thin architrave, which are of kamagong,” Tinio said. “The two doors, framed in kamagong, are composed of narrow planks of bulong aeta that have carefully been joined together so as to appear like a seamless slab. Each door is carved with a raised oblong panel with lobed corners, embellished with line-inlay of kamagong all along the border.”