No change for Filipinos from Christmas past–survey | Lifestyle.INQ ❮ ❯ 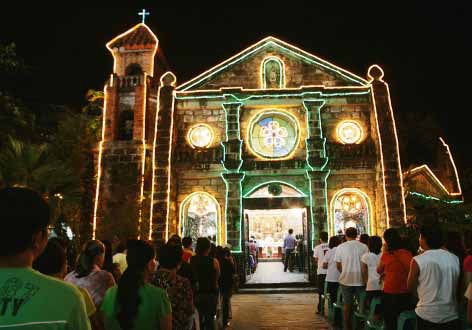 DAWN MASS People attend the first of nine dawn Masses at San Dionisio Chapel in Parañaque City, on the outskirts of Manila in this picture taken Dec. 16, 2012, to signal the start of the Christmas season The tradition of dawn Masses dates back to the Spanish era. The Philippines is more than 70 percent Catholic. INQUIRER FILE PHOTO

No change for Filipinos from Christmas past–survey

MANILA, Philippines–For most Filipinos, this Christmas will be just like last year’s, while about a third expect a more prosperous celebration and a majority are optimistic about the new year, according to a recent Pulse Asia survey.

Fewer Filipinos—14 percent from 24 percent in 2013— also said their Christmas would be poorer than last year’s.

The results of the survey, conducted from Nov. 14 to 20, showed that 52 percent of the 1,200 respondents said this year’s Christmas would be no different from last year’s, nearly the same results as in 2013 (54 percent), while 34 percent said it would be more prosperous, up by 12 points from 22 percent last year.

Looking forward to 2015, almost nine in 10 Filipinos said they would greet the new year with hope—the same sentiment echoed by the majority across geographic areas and socioeconomic classes.

Pulse Asia asked respondents to complete the statement, “For your family, the coming Christmas will be…” They were made to choose from “more prosperous than last year,” “the same as last year” and “poorer than last year.”

The same in Metro

The survey had an error margin of plus-minus 3 percentage points at the 95-percent confidence level.

Compared to last year, the percentages expecting a more prosperous Christmas rose across all geographic areas and socioeconomic classes with the biggest increases noted in Metro Manila (39 percent from 18 percent) and classes ABC (47 percent from 26 percent).

The number of Filipinos who said they would have a more prosperous Christmas went up from 25 percent to 41 percent in the Visayas and from 22 percent to 31 percent in both Luzon areas outside Metro Manila and in Mindanao.–Inquirer Research