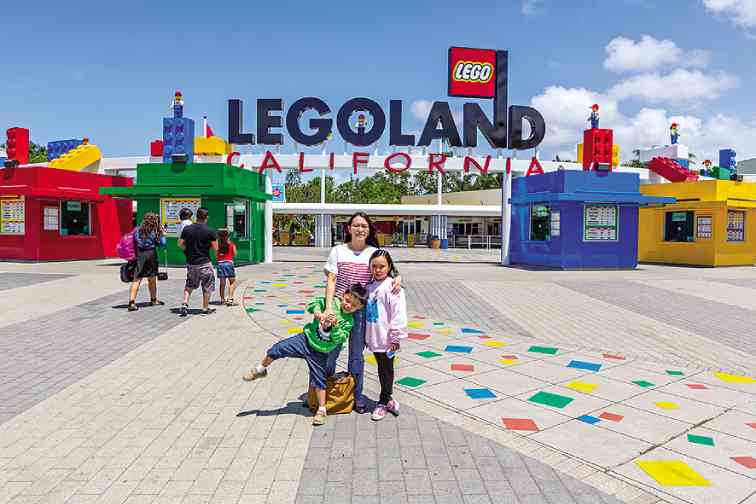 How and why I let my kids discover Lego Land California

When I was nine, a classmate gave me a box of colored bricks of different shapes and sizes. Following the instructions, I slowly put one piece onto the next until I built the image of a spaceship. It even had a small blue figure of a man with a yellow face—the astronaut.

That was my first Lego play set and I was hooked from then on.

Fast-forward to 2014. My kids Josh, 5, and Justine, 9, expressed a wish to visit Lego Land California for our annual family vacation. They didn’t know about my strong affinity to Lego.

So, even if Legoland Malaysia is just a few hours from Manila, we chose to fly all the way to the US to experience the 128-acre theme park.

In Southern California the family was jet-lagged but still raring to go. Borrowing our nephew’s car, we drove down to  Lego Land in the city of Carlsbad just outside San Diego.

At first we were afraid of getting lost since it had been a while since I drove in the US; thank God for GPS and Waze. Yet even without these navigation apps, you would have to be blind to miss the Lego Land Hotel; it can be seen so clearly from the freeway.

We decided to book a room in the hotel, which turned out to be the right decision since the park was too big to be enjoyed in just a day.

While there are other hotels in Carlsbad, it is ideal to stay at  Lego Land Hotel because it is right next to the park.

Also, the hotel itself is an attraction, with special-theme rooms, dining areas and a disco elevator which plays various tunes.

We felt like dancing when “Everything is Awesome” came on.

We chose to stay on the “Pirate” floor; our room looked like a cabin in a pirate ship.  There was a treasure chest that must be unlocked by the kids to get to the prizes inside.

There are many things to see in the park, so it’s best to study the map and identify the areas you want to visit.

We had a two-day all-access pass, but prioritizing what to see was still a must.

The set of “The Lego Movie” topped our list; the actual workshop used in the film, which contained various Lego worlds like Bricksburg and Planet Duplo, was here.

We did not leave the area until we got our pictures taken with movie heroes WyldStyle and Emmet.

Another sight to behold was Miniland USA—for everybody who has played Lego at one time or another. The recreations of Las Vegas, New York and San Francisco, to name a few, had amazing details so accurate that I found myself looking for specific landmarks.

The sets of “Star Wars”—the first and second trilogies— brought us back to memorable scenes. Before long I was arguing with Justine on how some of the scenes played out.

Of course, Lego Land would not be a theme park without the rides. While pretty tame compared to the ones in California Adventure or Magic Mountain, they were nonetheless fun.  From water rides to roller coasters to flying planes and runaway cars, we found something for every child, even the older ones.

Everything was made to look like Lego, which made the experience more authentic. Josh loved the driving school where he got his own “driver’s license,” while Justine preferred the Dragon, one of the park’s roller coasters, which I rode with her.

The Lego Land mini golf was interesting, and the Xbox arcade allowed us to play all the Lego video games we could think of.

The Lego Land Park actually consists of three parks, including the Chima Water Park, which opened early this year, and the Sea Life Aquarium, Lego Land’s version of Ocean Park. We skipped the Water Park as it was too cold for the kids; but the Aquarium was a welcome change.

While not as big as Sea World or Underwater World in Singapore, it had enough for the kids to enjoy themselves.

What made it really interesting were the interactive learning opportunities for the visitors. Josh loved going into the different glass tubes around the aquarium, which had different vantage points, to view his favorite sea creatures as well as the many touch screen monitors that informed him what he was viewing.

Justine, being the older sister, played the mini-maze game; she had to find specific points around the park and answer questions to win a prize. She also loved talking to the park attendants who gave valuable information about the sea creatures.

Two days were still not enough to explore Lego Land, but it was time to go.

Lego Land California is really  an incredible place for kids and a kid-at-heart like me. It is a place where the experience is limited only by one’s imagination.

A few tips to help you maximize your Lego Land California experience:

1) Stay at the Lego Land Hotel.

It is the ideal option. Kids get tired or the weather could change. Whatever happens, it will give you the opportunity to go back to your room whenever you want.

2) Book a package in advance that includes entrance fees.

Go online for affordable packages. We got a two-night stay deal inclusive of park access and freebies for the kids for $900. It saves time since you don’t have to line up, and you get tickets at a cheaper rate as opposed to buying them individually.

3) Let your kids expand their imagination.

One thing I loved about playing with Lego, it was a toy that allowed me to build anything I wanted. That’s what you find at every corner around the park. From Castle Hill to Dino Island to Land of Adventure, there are accessible Lego building areas.

Lego has come a long way in terms of themes for its play sets; if you are looking to buy one, there is no better place than the gift shops around the park. Also, take the opportunity to find the hard-to-find pieces you may have lost from older sets.

Carlsbad is also where a Premium Outlets branch is located; it’s an outlet shopping chain found across California and the best place to do your shopping.  This was probably one of the reasons my wife agreed to go.  Dads, keep that in mind.