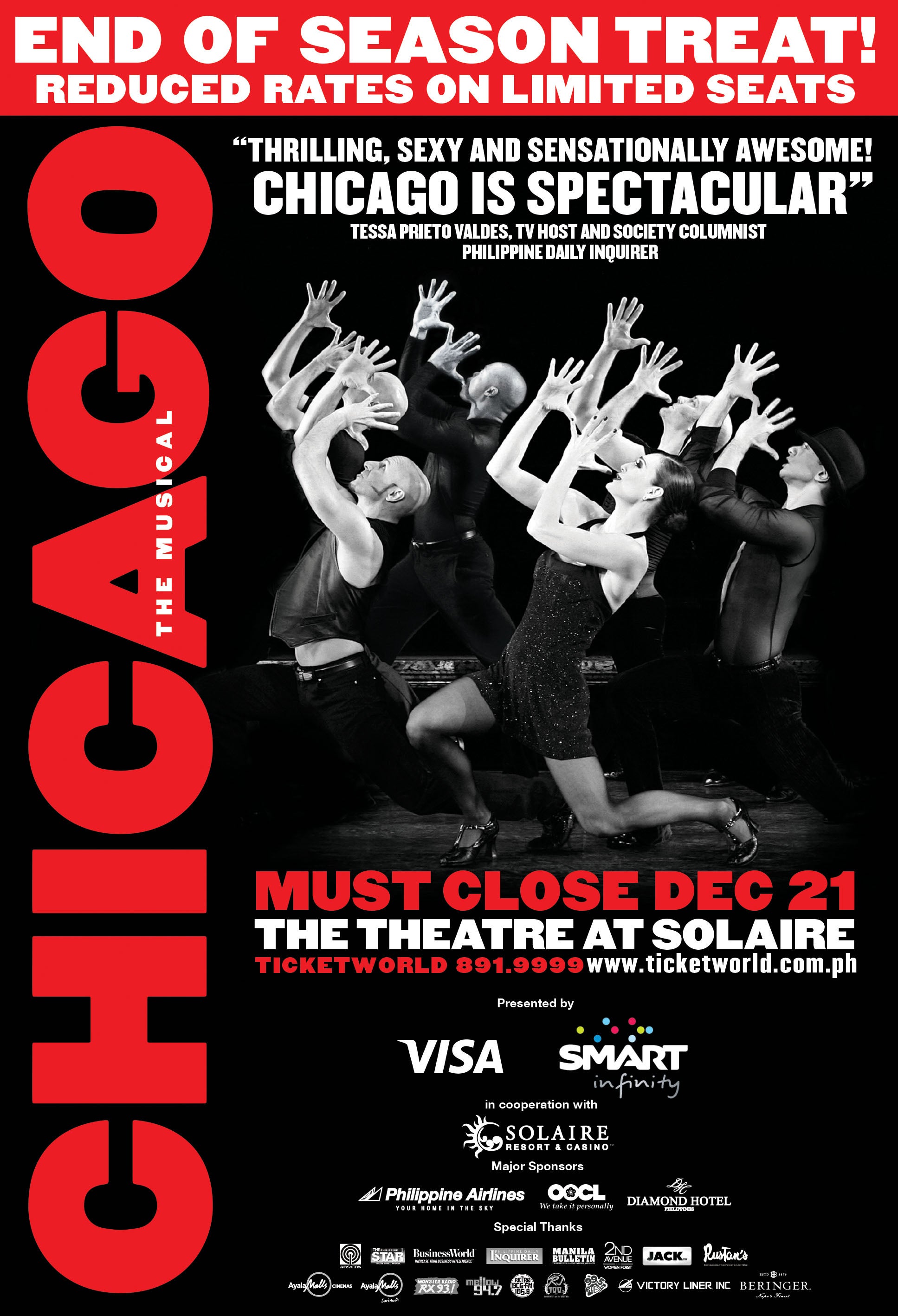 MANILA, Philippines—The Broadway and West End hit musical “Chicago” is closing the curtain this Sunday, December 21. Holiday special offer! Reduced rates on limited seats when you book your tickets via TicketWorld until December 21. Call 891-9999 or visit www.ticketworld.com.ph. Broadway’s #1 longest-running American Musical is presented in the Philippines by Visa and Smart Infinity, in cooperation with Solaire Resort and Casino.

“Chicago’”s witty punchlines, sizzling choreography and jazz-infused melodies continue to razzle-dazzle audiences in Manila—its only Southeast Asian touring destination this year. With countless standing ovations so generously given by Manila theatregoers, it would be a crime not to see this serial showstopper.

The Premiere of the show marked the grand opening of the country’s newest theatrical luxury hotspot – The Theatre at Solaire. The gleaming 1760-seat theatre has been specially constructed to house the big Broadway and West End shows, in recognition of the Filipino appetite for musical theatre, and firmly placing Manila on the international touring circuit.

This fan-shaped lyric theater with a seating capacity of 1,760 is ideal for all forms of the performing arts — be it musical theater, opera, concerto, pop concert, ballet, awards night, competition, circus act, kiddie show, or corporate event.

Set amidst the opulence of the 1920’s prohibition era, “Chicago” tells the story of Roxie Hart, a housewife and nightclub dancer with aspirations of becoming a Vaudeville star, who murders her on-the-side-lover after he threatens to walk out on her.

Desperate to avoid conviction, she dupes the public, the media and her rival cellmate, Velma Kelly, by hiring “Chicago’s” slickest criminal lawyer to transform her malicious crime into a barrage of sensational headlines, the likes of which might just as easily be ripped from today’s tabloids.

The Manila season of “Chicago” runs until 21 December, with no extension possible. Visit www.CHICAGOTheMusical.com for more information. End of season! Reduced rates on limited seats when you book your tickets via TicketWorld. Call 891-9999 or visit www.ticketworld.com.ph.

Jacob Keith Watson of ‘Chicago’ is no Mr. Cellophane