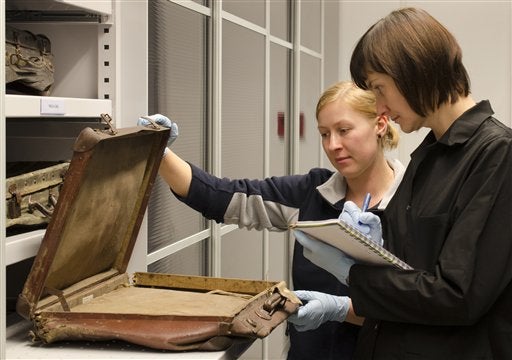 In this undated photo provided by the Auschwitz-Birkenau State Museum employees inspect a victim’s suitcase that is kept in the recently-opened, state-of-the-art protective storage at the Auschwitz Museum in Oswiecim, Poland. AP

WARSAW, Poland — The Auschwitz museum says some of the victims’ 3,800 suitcases have been put into a state-of-the-art protective storage room partly funded by the European Union.

Spokesman Pawel Sawicki told The Associated Press on Friday that 1,800 suitcases have been placed into air-conditioned, fireproof storage cupboards tailored to fit the various sizes of luggage. Another 2,000 suitcases are on display but will be rotated into the storage room.

Many of the suitcases are signed by their owners. One is from Else Sara Ury, a German-language Jewish author of children’s books popular in Germany in the 1920s and ’30s. She died in an Auschwitz gas chamber in 1943. More than 1.1 million people, mostly European Jews, died at the Nazi death camp from 1940-45 during World War II.

The Auschwitz museum can now be visited online at panorama.auschwitz.org