My Meteora: Between heaven and earth | Inquirer Lifestyle ❮ ❯ 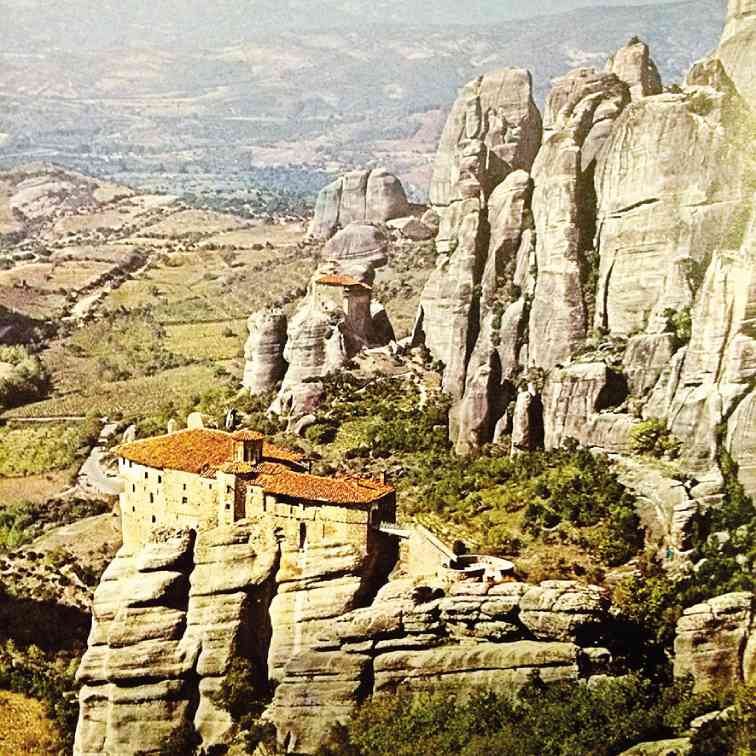 THE STONE forests of Meteora

My Meteora: Between heaven and earth

It is December in Manila, and  I am overwhelmed by the excesses of  the holidays. I have attended too many parties. The streets  are choked with traffic. Stores are drowning  with cheap Chinese Christmas bric-a-brac.

Nights are turned to day by blinding lights enveloping cement walls,  dripping from houses, whirling  from  walls of Christmas lanterns and resting  on Christmas trees laden with make-believe snow.

The loud  Christmas carols, incessant everywhere you go, have lost their meaning; they have turned to noise.

I long for the pealing of bells at dawn of Christmases past, when in my childhood,  we would await the Child in the manger at mass, lighted by  a lone star  in the high altar. “Silent  Night” was full of meaning then.
Escape from the city

I retreat to the  caldera of Taal, alone,  to Meteora.   In this  white house  on the side of a hill overlooking the distant lake, I  take in the cool air from the whispering winds, and the  stillness of the waters yonder.

It is my escape from the city, which I built as a gift to myself on my 60th birthday.

Perched between heaven and earth, almost touching the racing clouds, there one feels like an eagle soaring upon a spectacular view of the lakeside towns, of the tiniest volcano rising from the expanse of the water,  and the three majestic mountains beyond, before one’s  sight fades  into the distant sea to the west!

Here, where the pineapples  in rows grow  in sweetness from the fertile volcanic soil, and ripen by the bright sunlight fanned by the eastern winds, I built.

When I was a young doctor I was entranced by the sight of  water  shimmering with the light of the full moon. While chilling on the lawn of a  lodge, I knew then, that someday, I would own a piece of that heaven.

Every now and then I retreat to Meteora to meditate and  be filled with silence.

I built Meteora to celebrate the memory of its namesake somewhere in Greece, close to Macedonia.

In the ’60s, I heard from the hippies about  the incredible stone forests of Meteora where the monks  built their monasteries sometime in the 11th century.  I was backpacking around Europe, romping in the islands of Greece tracing Homer’s Odysseus. And in the campfires, fellow travelers  would speak about the silence   of those monasteries, and the kindness of the monks who offered weary travelers wine and coarse bread laden with the sweetest of  honey.

Years later, traveling to Greece once again, I took  a friend, a fellow traveler,  to the maze of white houses on the shores of Mykonos and the dizzying heights of Santorini where the sun set deep into the cobalt blue of the Aegean sea.

Tired of the beauty of these islands, now teeming with tourists, we took a bus from  Athens, to the plains of Thessaly to fulfill my longtime dream  of walking  up the rugged paths to the stone forests of Meteora to commune in the kingdom of silence.

The bus trip was an experience in itself. Crowding in with the local Greeks on a rickety bus, we left the noise of Athens  as the sun started to beat  the Parthenon with its blinding light. Soon, the bus was racing through the plains, passing by ancient olive trees and vineyards of grapes, rows and rows of them.

This mesmerizing vista was punctuated by villages of half-abandoned clumps of white houses roofed by gray tiles, or a plane tree in front of a solitary house where a  shepherd tended to a  herd of goats, lazy in the mid-morning sun.

The black-clad women were somber, their wrinkled faces echoing the crags of their ancient land. The men in their faded overcoats, their faces still bearing a trace of the handsome visage of  a Greek warrior  from the Iliad,  smelled faintly of ouzo, the classic Greek liqueur. I imagined them dancing a smart sirtaki, their arms spread like an eagle, or joined shoulder to shoulder, their steps in unison with the crescendo beat of a bouzouki, in a taverna in the Plaka skirting the Parthenon.

I smiled in remembrance of my youth, inebriated with retsina, in some wine festival, dancing the night like a naughty Pan,  and washing the joys of the night away,  bathing in the cool waters of the Aegean.

The bus stopped in a crowded town square. It was noon. The women started to open baskets bearing lunch. They cracked open hard-boiled eggs, munched on crusty bread and downed them with retsina.  I bought cheese and bread and listened to a jukebox, with  the divine Melina Mercouri singing “Never on  Sunday” in Greek, sultry with her throaty voice. I adored her.

An hour more, and we saw looming in the horizon  magnificent stones that soared to the heavens rising above the plains.  We were in Trikki, an ancient town dotted with greenery lying sleepy at the foot of the stone forest. It is mentioned in Homer’s epics, as having taken part in the Trojan War.

In classical times,  Asclepius, the famous doctor of antiquity, lived here and  with his sons  built an Asclepeion, a healing place.
During the Hellenistic  period, it played an important  role  in the development of  the Greek’s art and culture.

It was during the Byzantine  period, particularly in Meteora, that the  monastic tradition flourished.  The monks started building the monasteries atop the stones. How they built them, I can never fathom!
In their prime, there  were hundreds of them, and in the 14th century, Meteora became the center of monasticism  and Orthodox religious life.  For a few centuries more, it became  a hallowed  place near the heavens, where faith is forged through prayer and obedience.

With the slow  decline of this  religious practice through the years, only  six monasteries function to date.  But the ruins  of the  other monasteries remain,  and the strangeness and grandeur of Meteora continue to be a  spiritual oasis  for pilgrims  who seek the power of prayer in the attainment of inner peace.
St. Nicholas

Picking our way in a winding  path  to the  top of one of the rocks where sat the monastery of St. Nicholas, we inched our way to the gate and knocked at the  ancient door.

A kind monk, the only one left in the monastery, led  us into the half-dark halls reeking with the smell of candles.  It was a holy place that made you shiver in awe, that made you feel divine.

We were ushered to the gardens where honeybees hovered over a  vegetable patch  that the gentle monk tended in between prayers. He showed us the rest of the small monastery  where a simple life was lived  away from the din of the rest of humanity, where one learned to be “wise in thought and humble in will.” I began to understand and I sat down in silence.

A rap at the door disturbed my reverie and the kind monk begged us to stay. German tourists had come and he would be back with us shortly, as this was the first time Filipinos visited his place of communion and he wanted to know more about us!

Once back, he beckoned us to go with him towards  an ancient door, on the rock that formed the wall of the monastery. He opened the door with a large key and the door creaked into a cave redolent with the smell of incense.

Wide-eyed, we gazed at paintings  on the walls; of the Madonna, of  the cycle of the life of Christ, and  saintly figures of the Orthodox church, faded but recognizable still in the flickering light of candles. An atmosphere of the divine enveloped, which made you utter a prayer, emanating from a  mystical force  with the  feeling that  you felt close to God!

We knelt and the  monk touched our heads, uttering a benediction  and offered  us blessings for our safe voyage home.

I was full of a peace-giving joy and an internal  light difficult to describe. From the altar, he gifted us with a pair of candles made from beeswax  that he said he had crafted himself. This was as close to a mystical communion with God that I had felt!
To this day, I keep the candles, to be lighted one day, when I come close to  Him at my final hour!

We descended the steps down  from the castle of silence to a world which seemed to have changed with the mystical  experience.  We proceeded to the half-empty center of town, where in front of an Orthodox church, we consumed a Greek  meal of crusty bread,  fat olives from nearby Kalamata and juicy red tomatoes, sprinkled with generous morsels of  goat cheese, slivers of roasted lamb,  finished with a cup of yogurt doused with  Greek honey.

The following day, we took the plane back to home.

I write this piece, in my Meteora, overlooking the lake, meditating once again on the sublime experience years before, for which this place is dedicated.

I feel a sense of calm in the silence  that I know so well from a monastery atop  a lonely  pinnacle of stone rising above the plains of Thessaly.

Meteora  will always be there for me to be healed with the bounty of silence that these two places  in two different parts of the world provide my weary soul. And I  have shared the joys of silence for  people who understand.

The clouds race in the mellow  sky of December, powered by the wind sweeping the waters  of the lake below, as it always will. I walk up to the top of the house, resting for a while near the dome, gazing at the firmament.

I brace myself for the traffic  in the city  as my car passes by rows of pineapple,   fluid with the hills.  I know I will be less weary,  and as I descend to join the din of humanity in the city which I love dearly, I will sincerely extend to everyone the joys that the Season  brings, with a kinder smile.

Merry Christmas to All!