How fashion design is taught to young Filipinos

It was an homage to the Pierre Cardin costumes in the sci-fi movie “Barbarella”: a white trapeze mini in chiffon and crepe had a hole in the chest to reveal a fiberglass bustier; a black spandex leatherette suit was enlivened by inserts of plastic in cinnabar; a purple asymmetrical leatherette bustier looked very sculptural atop a brocade circle skirt.  The originality, construction and workmanship got the nod from the judges at Preview’s Emerging Fashion Talent Awards (Pefta).

Judge Inno Sotto then invited the creator, Erika Adona, a student of Slim’s Fashion and Arts School, to be a guest in next season’s Fashion Watch.

Showing her bravura pieces in Pefta was a triumph for Bulawan, who didn’t even know how to use a sewing machine when she enrolled at Slim’s.

Both 22, they face a bright future. Bulawan, who specializes in dressmaking technique, wants to teach at Slim’s. Adona has been getting inquiries.

Their works are in an exhibit showcasing the best of Slim’s students.

On view until Oct. 20 at the Slim’s Fashion and Arts School, the exhibit gives the public the chance to look closely at the exquisite craftsmanship for which the school is known.

If founder Salvacion “Slim” Lim Higgins were alive today, she would have been proud of how the students were inspired by her sculptural silhouettes and fastidious handwork. Consequently, they’ve developed their  individualistic style. More important, Slim’s teaches students how to think independently.

Its success is attributed to the fact that it has remained true to the vision of the founder.  A Fine Arts student at the University of Santo Tomas, Slim developed a keen eye for aesthetics. With sister Purificacion, she developed a curriculum that imparted the disciplines of design and construction and enabled the students to discover ways of expressing themselves. Their lesson plans were culled from their own experiences, not from books or copied from other schools.

Slim’s was later run by their younger sisters, Mercedes and Lourdes.

Today, Lim-Higgins’ children Sandy and Mark, the school directors, have taken over the reins. Most of the faculty in dressmaking have been teaching in the school since the ’80s; among them, two had assisted Slim. The registrar, Leticia Fulo, has worked for the school for 49 years. 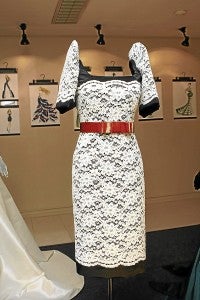 ational program  that focuses on its strengths, fashion design and dressmaking.

To prepare the students for fashion design, they learn fine arts basics, such as art theory, drawing and painting techniques which include wrist exercises.

In modern fashion history, students just don’t sit through lectures. They are required to draw the iconic styles of famous designers to build on their vocabulary.

“Most schools are traditional; fashion is geared for the West, while elements of the East are considered exotic. We teach students that this is a massive world where they can be inspired,” says Mark.

In dressmaking, they first learn how to take measurements accurately. To test their mettle before graduation, they are required to produce a terno.

“In the Sona, some of the butterfly sleeves of the ternos tended to droop. They’re difficult to do. Proportion is critical,” says Sandy.

While other designers and cutters will rip out the garment to discover the pattern, Slim’s students, who try to appropriate the founder’s gowns, are not allowed to do that. They have to figure things out for themselves by trial and error.

“For the exhibit, one student is creating  Slim’s terno based on a 1947 drawing. The design was ahead of its time, what with the cutout waistline and the layers of drapery on the hips,” Mark notes.

He shows only the gowns that are doable for the students. “Some would be impossible. That’s why she is iconic, because not everyone could do what she did.”

Indeed, the founder’s influence sets the school apart. “When you see Slim’s clothes, you’d be too embarrassed to do sloppy work. Her designs are three-dimensional,” says Bulawan.

“We teach them how to think like a designer. There’s a tendency for a young student to surround himself with images from fashion magazines or go to the Internet. We’re saying, ‘Open up your mind, open up your world.’ There’s a lot more out there that can help fuel creativity.”

The Higgins siblings underscore how Slim’s has “empowered” their alumni. “If they have to be a one-man band, they can be self-sufficient,” says Sandy.

Mark adds that if the cutter says a design idea is not feasible, a Slim’s graduate can negate that by producing the pattern himself.

Aside from Slim’s vintage collection which sets the gold standard, students have access to her collection of fashion magazines, Vogue American and French editions and Harper’s Bazaar that date as far back as 1937.

Another of Slim’s strengths is its democratic approach. “Fashion is not elitist. We have students who walk, come by jeep, and get dropped off by cars,” says Sandy.

When employers seek callers and pattern-makers, the graduates tend to snub the offers. “They all put up their own shops, whether it’s a couture salon or a little sastre. They don’t want to work for someone. Mission accomplished,” says Mark.

Although the siblings were educated abroad (Sandy studied Film Production at York University Toronto, Mark studied at Parson’s School of Design in New York), they’ve realized that Slim’s curriculum is adapted to the local context.

Sandy points out that the Philippines has a culture of custom-made clothes. “You don’t have to be wealthy to afford that. There’s a demand for someone to supply that craft. We are not a manufacturing country. We’re not going to be China or Vietnam. The Philippines is more artisanal. Here, you don’t have to be rich to be a fashion professional. We want to hone the skill of anyone who has the talent and determination to break into the industry.”

The siblings aim to create a culture of cooperation and ethics amid a competitive industry.

“Slim’s as an institution has always taken fashion education very seriously, with great emphasis on design and technical skills,” says Mark. “With those, an aspiring designer then moves into the working world, and learns to do PR, marketing and networking. But all of this would be inconsequential without a foundation of real skills. It might get them 15 minutes of fame, but it won’t guarantee them sustainability or a prolific career. At the end of the day, their success will depend on their work.”