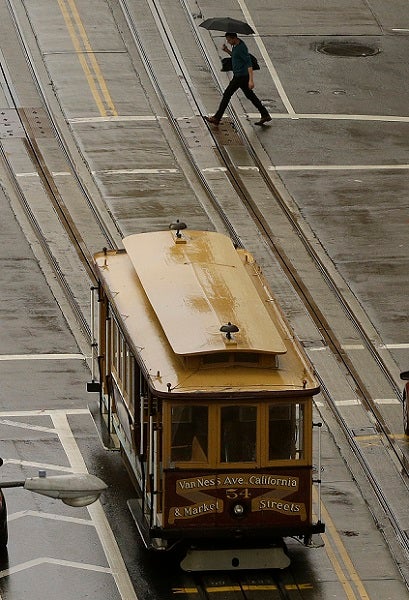 NEW YORK, United States – Trying not to spill your coffee while wedged up against perfect strangers on a jam-packed subway is a daily challenge for New York commuters.

Now one real estate executive, inspired by an Alpine holiday in France, believes that cable cars can solve New York’s transport problem – too many people and too few trains.

A commute that could make you “soar, not sore” quipped the New York Daily News.

Tens of thousands of people travel across the East River from Brooklyn to Manhattan each day, squeezing into subway cars, packing onto ferries and clogging bridges with bumper-to-bumper traffic in a city of 8.4 million.

In the last 15 years Brooklyn has transformed into one of the most sought-after places to live in the United States, dense with bars, restaurants, nightlife and apartments with stunning views.

The only problem is that a single, overcrowded subway line, the L, and a single station, Bedford Avenue, serve the hippest and most coveted neighborhoods of Williamsburg and Greenpoint.

The strain is only expected to get worse as more people move into the area.

From the Brooklyn Navy Yard – where Lady Gaga launched her latest album – to the demarcation with Queens, up to 20,000 extra apartments are being built in the next 20 years, according to Daniel Levy, the man behind the ambitious idea.

Building a new tunnel or bridge would be prohibitively expensive, but European-designed cable cars could ferry as many as 5,000 people an hour across the water into Manhattan in just four minutes, said Levy, the president of New York’s City Realty.

With around 15,000 traveling through Bedford Avenue each weekday between 7:30 and 9:30 am, that could be a significant load off.

“I absolutely believe this is hands-down the best solution, and so first and foremost I just want to see it built,” Levy told AFP in his offices above the New York skyline.

He got the idea two and a half years ago, when he was skiing in the French Alps and found himself on a new, modern gondola system that took him by surprise.

“I got half way up the mountain and I said to myself ‘Jeez, someone really ought to put one of these in between Brooklyn and Manhattan.'”

New York already has a tram, which connects Manhattan to Roosevelt Island, although the new system would be quicker.

Levy says he is in talks with city and state officials, real estate groups and community organizations to cut through the red tape, win financing and get the project off the ground.

Even the military has to give ultimate approval, as the Army Corps of Engineers controls navigable rivers in the United States.

“There’s a lot of permitting, grants, a lot of approvals that need to happen,” he acknowledged.

They are “encouraged to see that people across the city are thinking creatively about addressing the transit needs of New York’s growing population,” said spokeswoman Kate Blumm.

If the idea comes to fruition, the city would be a late convert to gondolas, which are already up and running in cities in South America, Germany and Turkey.

Levy says 2018 or more likely 2020 would be the earliest they could be up and running.

He hopes that basic math will win over detractors.

“You can literally build a gondola system for pennies on the dollar over what it would cost to build a similar subway system,” he said.

The technology is fast, reliable and would beautify the skyline, not least when lit up at night.

But is it really viable?

Levy admits that the plan has been met by intrigue and recognition that it is a difficult project.

Commuters battling with the bulge at Bedford Avenue had mixed feelings about getting a cable car to the office.

“I don’t know how I feel about those because I know they get stuck a lot,” said Lauren Liles, who works in business management and whose children go to school in Greenpoint.

Erwin Chen, who works on Wall Street and lives in Williamsburg, says there are days when he has to wait for three trains before he can board.

“The ski lift idea is crazy, it may be crazy enough to work.”