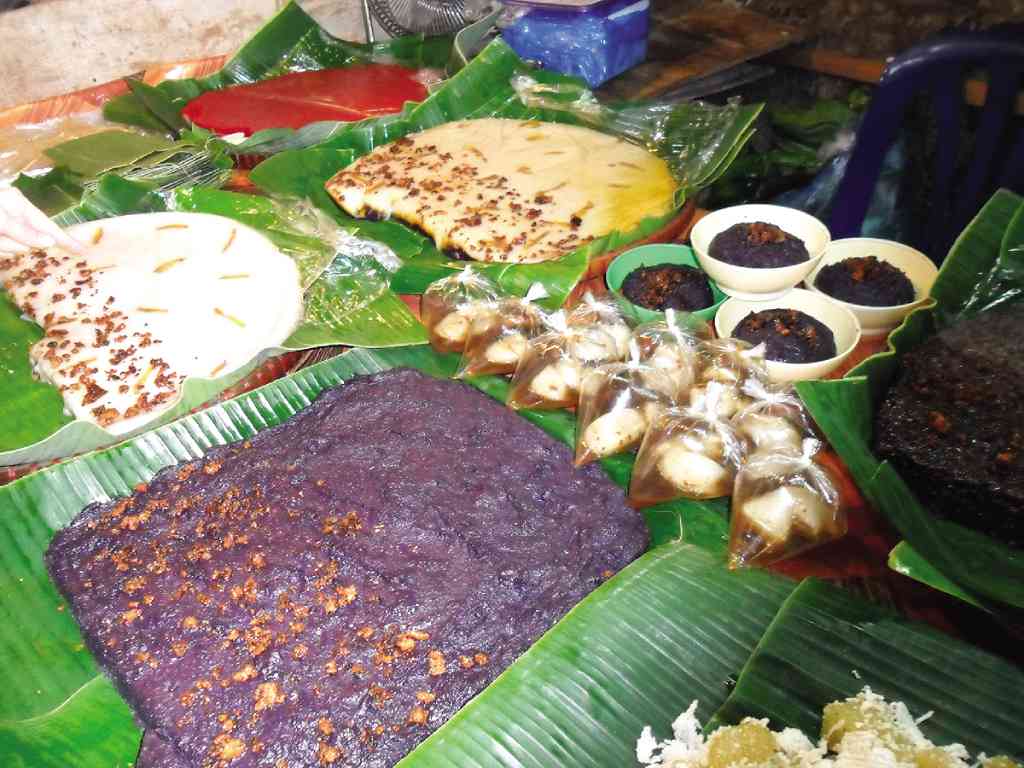 SAPIN-SAPIN and other native cakes

Food trip: A taste of Malabon via tricycle

For many of us, tricycle drivers are a bane; they recklessly cut corners just to get ahead. They also use national highways where they are supposedly not allowed. And the noise from their vehicles can drive you crazy.

Would I like to take a tricycle tour of Malabon? The invitation was intriguing, so despite my misgivings about the mode of transportation, I said yes. After all, this was a project of City Hall, and I supposed we would have a safe journey. I wasn’t wrong because we had police escorts throughout our predetermined route during the launch.

But before that, I loved the suggestion that we have lunch first at Betsy’s, a byword in pastry offerings in Malabon. If you want to know its location, you’d have to pronounce the name right—“Betchee” or no one knows what you’re looking for.

We reserved packs of the house specialty, broas, which is like a soft cake encasing a butter creamy filling.

After the welcome ceremonies, guests slipped into their assigned tricycle. We could hardly talk above the din of the motor. May I suggest that a noise-reducing measure be required for licensed tricycles especially in communities like Malabon? Then again, tricycles are ideal for short-distance rides to get to places of interest.

Concepcion Market was the first stop, and I saw once more familiar food specialties that were featured in columns done long ago. At this market as well as the Central Market of the city, the first stall that greets buyers is the okoy, bean sprouts bound together with cornstarch and topped with shrimps, fried crisp on order. Across it is what Malabon is known for, the sapin-sapin, layers of rice cakes in yellow, violet and white, and all the other native cake concoctions such as kalamay mais, kalamay monggo, kutchinta, bikong pinipig and bikong puti.

I kept my eyes peeled for tapang kabayo (salted horse meat), and there it was under a big sign. It is an acquired taste, and you have to be a true Malabon resident to appreciate it.

There were also long strands of longganisa; one measuring about a meter long is called “bologna.” And then there was quikiam, ground pork made crunchy with minced jicama and wrapped with soybean “skin.”

Bangus or milkfish is another prized Malabon product that can be bought as is or processed. Several women were deboning bangus using special tweezers. When I asked how many bones each fish has, they said 215. Do they count them? No, they answered. But I think they would know by now. There was bangus tinapa (smoked) as well as relleno (stuffed).

After Concepcion Market, we then visited two art galleries, the Artes de Paseo Gallery, whose artist in residence is Augusto Santiago, and the Cacnio Gallery. The latter is set within a Vigan-style house where artist Angel Cacnio himself shows you his works (he designed the P20 and P100 bills) and those of his artist sons, Ferdinand and Michael.

And then it was off to heritage sites. The first one was the Ibaviosa house, an example of a prewar home. The smell of fermenting fish nearby was difficult to ignore.

Started in 1970, the place now has huge cement vats of fermenting fish. When the liquid turns amber in color, it will be sold under the brand name Malabon. The more famous patis in the place is Rufina, named after Rufina Salao Lucas who founded the business in the 1900s.

The second residence we visited, the Raymundo house, is more than a century old as its archway reminds you in Roman numerals the date of its construction, 1861, with a Hapsburg eagle engraved in stone on top. The archway used to welcome visitors, but since the street was raised several times to solve flooding problems, its base is about 2 feet below street level.

The present generation Raymundos are proud of their inheritance, but at the same time are bothered by the boats that dock nearby and which pollute the air with their sand blasting. They are proud as well of their relative who makes the famous Judy Ann Crispy Pata.

The tour started and ended at the 400-year-old San Bartolome Church founded by Augustinian friars. The last time I was there, the church was being renovated. The exterior seems a bit drab with its gray façade, when its Grecian columns used to stand out because they were yellowish white. Inside, huge photos of old Malabon made the church quite unique. Historian and writer Felice Sta. Maria came with us partly because she wanted to know where the tranvia (tramcar) station used to be in Malabon; she got her answer in one of the pictures that showed the tranvia passing by the church. So, in three hours, tour guests had a taste, in more ways than one, of Malabon.

The San Bartolome Church was where Malabon Mayor Len Len Oreta wed his wife, Melissa Sison Oreta, six months ago. The Tricycle Tour is a project of Melissa for Visit Philippines 2015. Her other life as a chef makes her want to do specialized food tours that will include a visit to different carinderia and old bakeries.