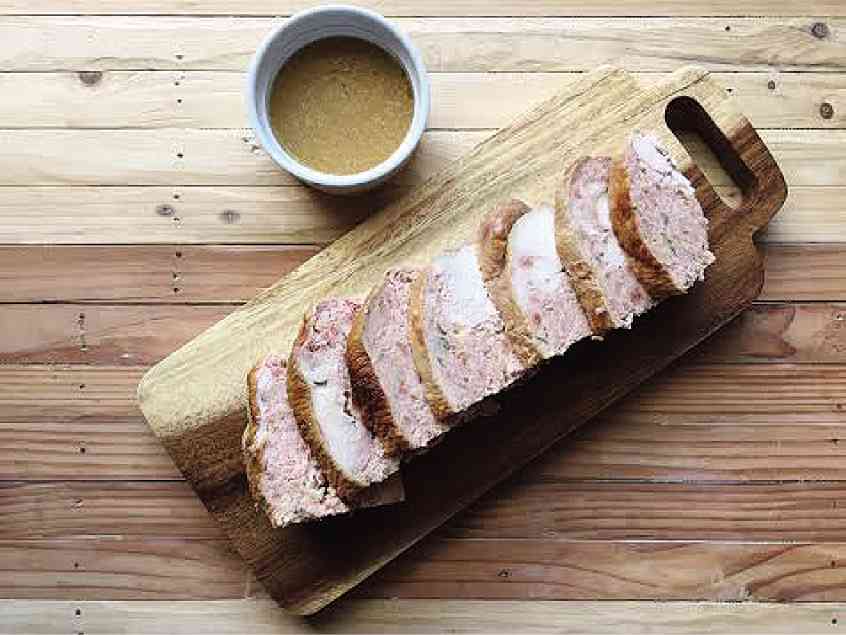 he author’s version of her grandmother’s relleno JILL LEJANO

Last year, for our barkada Christmas dinner, a tradition we started six years ago, we made sure our menu matched our Secret Santa theme: circus.

This year, because our Secret Santa was vintage-inspired, we decided on a classic menu theme: family recipes.

I knew instantly that I wanted to use one of my Lola Charit’s recipes; she is easily the best cook in a family of serious eaters. But which one?

She makes a killer lengua, but so does Jill’s Ninang Evelyn. Lola’s champorado? Delicious and rich (I swear, you would not find a better bowl anywhere else), but it’s no dinner material. I decided to just call Lola. When I asked her what I should cook, she said, without missing a beat, “Relleno.”

“You’re going to give me the recipe?” I asked.

Lola Charit’s rellenong manok is the stuff of legend. No matter how much you beg, she makes it only once a year—twice, if we’re lucky— on Christmas and New Year.

It’s so good that when it’s on the table, I ignore every other dish that’s served.

And now I was about to make it.

I’m not a bad cook. I’d like to think I know my way around a kitchen. But making relleno is not the same as making baked macaroni. Or aglio olio. Or any of the other dishes I whip up regularly.

Relleno is a dish I’ve been eating since I was a toddler. I’ve never known Christmas without it. I know exactly how it should look and taste. That meant I would be my own worst critic. I was terrified but excited.

My first step? Buy all the ingredients. It took visits to two different supermarkets and a branch of Majestic Ham to get everything I needed: chicken, butter, ground pork, chorizo Bilbao, ham, queso de bola, pickle relish, eggs, lemon and soy sauce.

To make relleno, your chicken needs to be deboned. But unlike Lola Charit who has the deboning skills of a pro, I do not trust my knife aptitude just yet. Deboning a chicken will have to be lesson No. 2.

For my first attempt at relleno, I used chicken from a supermarket—bone-free, save for the drumsticks and wings.

“Clean your chicken well,” Lola had written. “Rub it with salt and rinse.”

I made a marinade of soy sauce and freshly squeezed lemon juice, and rubbed it all over each chicken, including the insides.

“Some people like to marinate for just a few hours. But I like leaving it overnight, turning them from time to time,” Lola Charit said.

The next evening, after a busy day, I worked on the stuffing, starting by grating the queso de bola.

“Chop the ham finely, ’yung talagang pino,” Lola Charit instructed. Chopping a minimountain of ham into tiny pieces is harder than it sounds. My right hand started to cramp, and I was beginning to get bored.

After conquering my ham Everest, chopping the two pieces of chorizo was a breeze. I mixed them with the ground pork and ham, adding pickles, grated queso de bola and raw eggs. My stuffing was ready.

I decided to bake the chicken the next day. I had plenty of time, I thought, the party wouldn’t start until 6 p.m.

But the next day? Panic. Because the oven wouldn’t work. And the repairman declared it irreparable.

I called Lola Charit: “Can I go there? I need to use your oven.”

When I arrived, my grandma was standing in her kitchen, surrounded by bowls of ingredients. She was making her own stuffing. The atmosphere was calm, a kind of stillness afforded by only the most self-assured cooks.

I presented my stuffing for inspection. Lola Charit took a tiny ball and popped it into the oven toaster. “You can fry it, too, but this is faster,” she said.

That’s when I knew my stuffing had passed the test. It was time to stuff the chicken.

Lola Charit and Melinda, her trusted cook, watched closely as I began to massage the chicken with butter. “Make sure you rub the insides with butter, too,” Lola said.

When the first bird was glistening, I grabbed a handful of the pork-ham-chorizo mix and stuffed it inside the chicken. Then I realized that I made a mistake. I had forgotten to add corn starch to my stuffing.

“Oh my god,” I said, taking the meat mixture out again.

Corn starch added, I continued stuffing the chicken, making sure it looked plump.

Melinda handed me a needle and thread. I looked at her and Lola. “Just sew?”

“Yes, just sew up all the holes,” Lola Charit said.

I quickly got to work, sewing steadily and confidently, while saying a silent thank you to St. Theresa’s College for all those grade-school sewing lessons.

Then Melinda wrapped both chickens in foil, put them on a baking tray and slid them into the preheated oven.

Because I bought deboned chicken, I didn’t have bones to use to make chicken stock. Lola Charit gave me the bones of one of her chickens; they were already simmering in a pot when I arrived.

I melted butter in a saucepan over low heat, added a few tablespoons of flour, whisking the mixture until it was smooth. Then I added chicken stock, stirring continuously to avoid lumps. My gravy base was ready to party with the chicken drippings.

While waiting for the chicken to bake, I finally learned the history of the relleno I love so much.

Lola Duyang, my grandma’s mother, used to make relleno when Lola Charit was still a little girl. But during the Japanese occupation, ingredients became scarce and life became hard.

She stopped cooking elaborate meals. Even after the war, she never returned to her old ways in the kitchen. And that is why   Lola Charit did not get the relleno recipe from her mother.

The pressure became even more intense when her mother found out who her mother-in-law would be—a woman they called Señora Bibay, who used to own a restaurant. She was a tyrant inside and outside the kitchen.

Lola Charit finally learned how to make relleno when my father was a little boy, after she cajoled the Spanish wife of a family friend into teaching her how to do it.

My grandma is now 87 years old, and her thirst for knowledge about food and cooking continues. She’d call me to say, “Can you buy me Nora Daza’s new cookbook?” or “Can you research about accord powder?” or “Let’s go to Chef Jessie’s revolving restaurant. I want to see if it’s like the old revolving restaurant in Quiapo.”

Thirty minutes later, the delicious smell of baking chicken started wafting through the air. Another hour later, it was done.

Lola Charit was right—I put so much stuffing into one of the chickens that it had burst. But it still looked good to me—the cracked skin golden brown, the stuffing peeking out.

As I got ready to leave, Lola handed me a container of cooked chicken liver. She said, conspiratorially, “Chop these and add them to your gravy. Make sure you strain it after.”

Later that day, I found myself in a different kitchen, in front of the stove, adding drippings and liver to the gravy before straining it. The two chickens were in the freezer; Lola Charit insisted that they needed to sit in the refrigerator before slicing them.

When she found out that I was baking the relleno on the same day I was serving it, she said, “Pambihira ka, dapat kahapon mo pa ’yan ginawa.”

The most nerve-racking moment of making relleno is cutting it in half just before you serve it. My heart was pounding as I sliced the first chicken right down the middle. If it falls apart, I had failed.

I held my breath as I wedged the two sides apart. It did not collapse. I sighed in relief and started slicing.

I sat down to have dinner, surrounded by people I love, and I put a slice of relleno on my plate, drizzled gravy over it, crossed my fingers and took a bite.

My relleno tasted just like my grandma’s relleno, my gravy exactly like hers. I thought I was going to cry.

My friends enjoyed my chicken relleno, too; they raved about it. One of them was so inspired that the next day, he decided to make his own version.

Making my Lola’s relleno was more than just an attempt to learn a complicated dish. It was a chance to bond with my beloved grandmother, an opportunity to share a part of my family with my friends and a moment to look back on all those Christmases that I spent eating her stuffed chicken.

The memories are even more delicious now, especially since I know how much love and work goes into making Lola Charit’s chicken relleno.