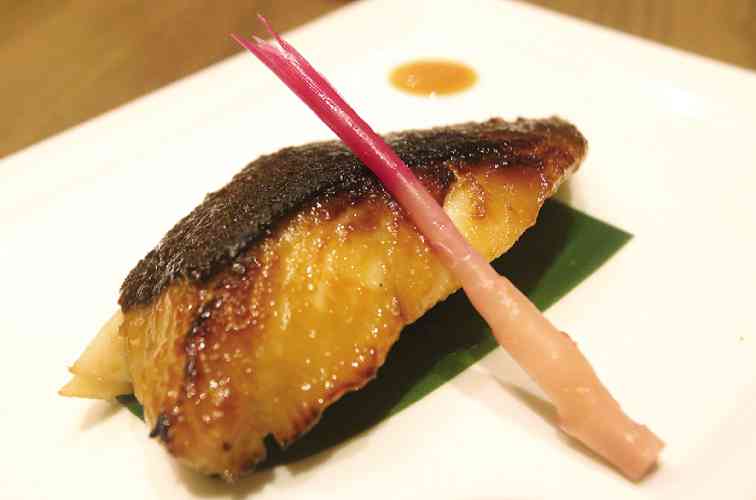 Just in time for the holiday season, Nobu Manila opened Dec. 14 with very little fanfare. But the restaurant was full last Sunday evening with families and couples eager to try out the Japanese food with a Latin-American twist pioneered by chef Nobu Matsuhisa 20 years ago.

Instead of sticking to a strictly Japanese menu, Matsuhisa drew from

his experience working in Tokyo sushi bars, and stints in Peru and Argentina.

His light-handed approach to this fusing of cultures succeeded where many others had failed; the flagship restaurant received three stars from the New York Times and a Michelin star.

At Nobu Manila, guests can now sample some of the restaurant’s signature dishes, including the meltingly soft Black Cod Miso topped with a stalk of ajikame or red ginger. After this rich dish, one is advised to bite into the pleasantly tart ginger root to refresh the palate.

There’s the Bone-in Rib Eye Steak served with three sauces, although with steak as good as the one served us, there’s really no need for added flavors.

Sunday night, we went through the complete Nobu experience that started with small plates of thinly sliced raw seafood—scallops, golden eye snapper—arranged in starburst pattern and topped with yuzu, cilantro and miso. 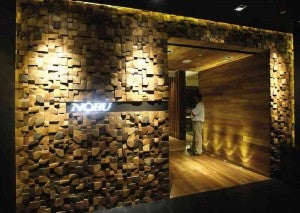 green wasabi made it even more festive.

This was followed by such hot items as the signature Rock Shrimp Tempura (P990) and the King Crab Tempura with Amazu Ponzu (P1,850).

The crab was a revelation. Strips of crab meat were lightly coated with tempura batter, fried, and then topped with thinly sliced shallots and cilantro. The secret was in the sweet and tart ponzu sauce that gave the dish its kick, serving almost like a vinaigrette to this pricey crab salad.

An oven-roasted spiny lobster with uni (sea urchin) and peppery shichimi togarashi butter was rich, flavorful and surprisingly easy to tease out of its shell.

Turned out the lobster was halved lengthwise, removed from its shell, flavored and roasted. This made it more “chopstick friendly”—no need for fork and knife.

It’s a good thing the food at Nobu is meant to be shared. Dishes are placed at the center so everyone gets a chance to try each item.

Once the dish is empty, the waitstaff is trained to clear the table with a friendly, “May I get this out of your way?”

Succeeding dishes are briefly explained, followed by, “Please do enjoy.”

If you prefer to drink sake (Japanese rice wine) with your meal, the restaurant has a bar manager who can suggest several with varying strengths and alcohol content.

There is also a multicourse Omakase menu priced at P6,160 (Chef’s Daily Creations) and P4,480 (Nobu Signature) where guests can sample “the essence of chef Matsuhisa’s cuisine.”

The formal launch of Nobu Manila and the 321-room Nobu Hotel—the first in Asia and only the second in the world—is set for early next year.

Nobu Manila is at Aseana Boulevard corner Macapagal Avenue, Parañaque City; tel. nos. 6912882 and 6912885. The property is part of City of Dreams Manila, an integrated resort-casino on a 6.2-hectare site.