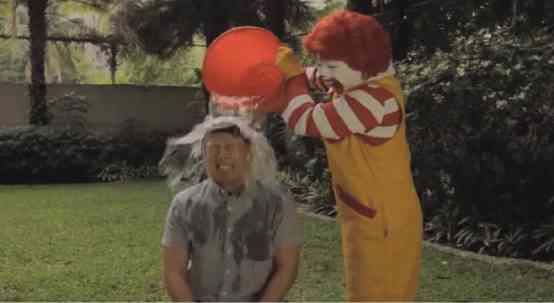 This trend got everyone uploading a collage of themselves and their lookalikes (or people they wish they looked like). Some, like those with real makeup skills, flaunted the amazing results, while those who just wanted to have fun transformed themselves into things like, well, a cupcake or a chocolate cake roll.

The reason behind it was noble and socially relevant, but the actual execution of the challenge (and even the nomination) was so much fun that celebs like John Mayer, Tom Cruise, Leonardo DiCaprio, Lady Gaga, Jennifer Aniston, and Kate Moss didn’t think twice accepting the video challenge.

Everyone wanted these HD personal cameras that caught amazing footages of all sorts of adventures—from a diver getting lost in a jellyfish-infested lake to a man getting real close to the mouth of a volcano, to a pig surfing.

With all the Instagramming, Tindering and online browsing we did this year, phone batteries running low was an inevitable, frequent occurrence. As a result, everyone had to get a power bank—an external battery pack, whether it’s a handy, slim one or a huge, power-packed, Hello Kitty-designed kind.

We’re a selfie-loving country so these selfie sticks, which made sure we no longer needed strangers to take our photos, were a huge hit.

Apple fans worldwide rejoiced upon the announcement and eventual release of bigger iPhones. People naturally preordered, lined up for, and flaunted on social media 2014’s most coveted handsets.

A time-saver, this traffic and navigation app continues to be a staple on the smartphones of drivers and commuters alike.

Uber, Grab Taxi, Easy Taxi—commuters thanked the heavens for apps that made it easier for them to get taxis no matter where they are or what time.

Thanks to the local edition of this be-your-own-publisher app, wannabe-authors have scored fans, money and even deals with big groups that adapted their digital books into printed form, TV shows and even movies, inspiring a lot of young ones to write and upload their own masterpieces.

Sure, we couldn’t participate in the public (but kinda private) chatrooms that the messaging app rolled out late this year, but we were more than okay with just being a reader, considering some of them were extremely amusing, such as the Becky Nights chatroom.

A lot of people got hooked on this dating app that had hopefuls swiping either to the left or the right in hopes of meeting The One.

The music-streaming sites didn’t just let anyone play any song any time for free, it also made playlists. It has one in every genre or for any mood, such as Songs to Sing in the Shower, Unrequited Love, Bollywood Workout, Morning Commute and #ThrowbackThursday.

The game’s instructions may have been extremely simple—fly forward and avoid the pipes you encounter—but staying long in the game was so challenging and frustrating that it proved to be quite an addiction worldwide. It was such a hit that people reacted violently when it was pulled out by its developer; thankfully, it didn’t take long before copycats like Flappy Wings, Splashy Fish, Hoppy Frog and even Flappy Miley (yes, as in Miley Cyrus) were created.

IGers noticed a decline in their followers this month when the photo-sharing app deleted inactive and fake accounts, resulting in a lot of celebs showing less impressive numbers. Diddy lost 22 percent of his followers while Justin Bieber lost 15 percent. Affected by the purge? It’s not as bad as what happened to user ChiragChirag78, who lost 99.9 percent of his followers! He has since deleted his account.

Her tweets were so hilarious and spot-on that we wanted her to be our Tita.

James Franco and Seth Rogen’s “The Interview,” a comedy that parodies North Korean leader Kim Jong-Un, resulted in a massive hack into Sony’s servers, leaking private conversations between executives, celebrities and unreleased films. It’s a big mess but we’re really concerned about one thing: When can we watch “The Interview”?