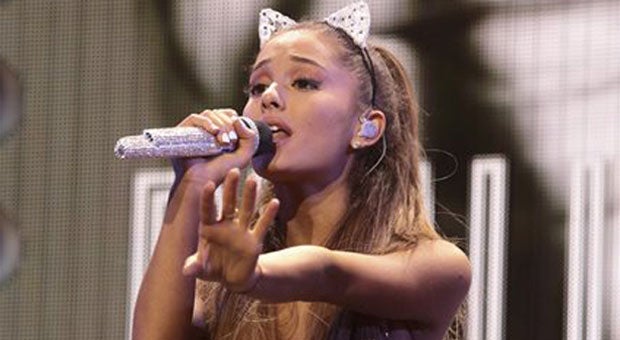 Azalea, whose faces have graced our news feeds more times than we can count.

On top of their number one hit singles and millions of music video views, they have also inspired countless memes, some of them not exactly flattering.

While Snoop Dogg had already apologized to Azalea for his “White Chicks”-related posts, Grande’s viral Victoria’s Secret memes (which shows her looking terrified after nearly getting hit on the face by an angel wing at the recently concluded Victoria’s Secret Fashion Show) were still making the rounds in social media. We have to admit, the pictures looked pretty funny.

But no one made headlines more than country lass-turned-pop goddess Taylor Swift, who now seems to have the entire planet eating out of the palm of her hand.

The 25-year-old “Shake It Off” singer raised a global ruckus when she pulled her entire catalog from Swedish music streaming service Spotify, reportedly due to her strong opinions against free (or low-royalty) music distribution.

This epic battle sparked endless debates and petitions for Swift to “come back” to Spotify, but to no avail. While both sides raised valid points, the fact remains that the songs are still the artist’s property, so Swift can do whatever she wants with hers. Sorry, people—no pay, no Tay.

Battle of the booty

The past years have seen their fair share of divas with ample bottoms, but in 2014, the music industry took its inexplicable obsession with butts to an appallingly new level. Reigning queen “B” J.Lo and heiress apparent Iggy Azalea shook their behinds like there was no tomorrow in the music video “Booty.”

Nicki Minaj, meanwhile, bared her best assets in the cheeky track “Anaconda.” It didn’t help that the boys were also singing praises about big bottoms, as exemplified by the Jason Derulo-Snoop Dogg collab “Wiggle.”

While we appreciate killer curves, maybe something a little less in-your-face would work better, like Meghan Trainor and her ear-candy anthems for full-figured people.

Michael Jackson’s second posthumous album “Xscape” deserved special mention, partly because the lead single “Love Never Felt So Good” with Justin Timberlake was such a fun-filled tribute (and partly because JT never looked so good, too).

Original soundtracks of teen flicks “The Fault in Our Stars” and “Divergent” (incidentally, both are topbilled by Shailene Woodley) were also rife with indie-pop gems, such as “Boom Clap” by Charli XCX and “Waiting Game” by Banks, respectively.

Another surprise yearend gift was Madonna’s six-song release from her upcoming album “Rebel Heart.” Following the recent leak of her unfinished demos by unknown hackers, Madonna promptly responded to what she called “artistic rape” by officially releasing the first six tracks from the album, including a collab with Nicki Minaj, “B-itch I’m Madonna.”

On a more serious note, props to the artists who lent their talents in remaking the 1984 charity song “Do They Know It’s Christmas?” this year. Thirty years after the original song’s release, old members Bono and Sting joined new faces like Ed Sheeran, Ellie Goulding, Sam Smith, and One Direction in reviving the Band Aid spirit, this time to raise funds for the fight against Ebola.

Oh, how the mighty have fallen this year. People were still shaking their heads after the dismal reception to U2’s “Songs of Innocence” (also known as Apple’s free gift to the world that not everybody wanted) and Robin Thicke’s woeful eponymous ode to his ex-wife, Paula Patton.

Blame it on a faulty marketing strategy or a really bad breakup, but perhaps these artists should have taken pointers from Weird Al Yankovic: Don’t take things too seriously.

Yankovic’s runaway hit (and final album?) “Mandatory Fun” shot to the top of the charts when he simultaneously released eight music videos parodying current chart-toppers by the likes of Pharrell Williams, Lorde and Imagine Dragons. The veteran spoofmeister’s “Tacky” brand of humor may not be for everyone, but “Word Crimes” (his spin on Robin Thicke’s “Blurred Lines”) may just be brilliant enough to be considered standard educational material for English grammar.

Not that we don’t love the film and its soundtrack, but we believe things reached saturation point. Last year’s undisputed Disney anthem “Let It Go” got children of all ages warbling and playing the song ad nauseam all through the year, so much so that “Frozen” director Jennifer Lee has actually apologized to parents everywhere for it.

Here’s hoping that 2015 will finally convince kids that it’s time to, well, let it go. At least until the movie sequel comes out.