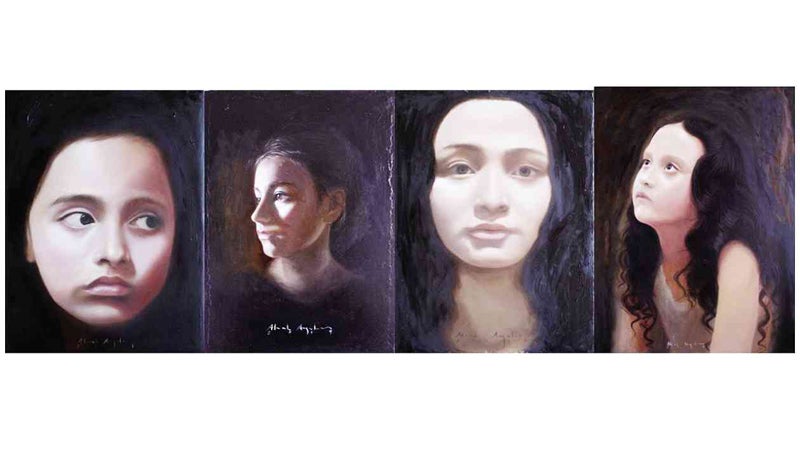 Undoubtedly at the pinnacle of fame and fortune is Ronald Ventura, who, while still in his 30s, has so long dominated the Asian auction houses—indeed, the one, true barometer of an artwork’s desirability.

Not a well-known fact is that Ventura, when still striving and unknown, was reared and nurtured by “Doc” Joel Mendez’s Big & Small Gallery. Is the gallery’s name prophetic: that an artist can start small but end up big in the art scene?

Or, better yet: Can lightning strike in the same place twice?

Currently on view is the solo exhibition of recent works by a 26-year-old artist named Aleah Angeles. Back in 2010, when she was a mere 22-year-old, she had already produced a work titled “Lazy Daisy.” Amazingly, Christie’s decided to put the work on the block. Impressively, “Lazy Daisy” sold for twice the estimated value.

Just what is it about the work that it should provoke a fevered bidding war? The catalogue described it as “Angeles’ alter ego, falling asleep under a tree, with her half-read book draped on her face.”

Then it proceeded to wax poetic, though, to be sure, there had to be more to the painting beyond its dreamy and lyrical mood, two adjectives seemingly destined to be attached from hereon on her works.

Two years later, in 2012, Angeles would finish another painting that, to this viewer, is an even more startling work, aching with a kind of beauty that is hard to define. Titled “Hallucination Bloom,” it is a portrait (hardly the word, as the visage is so densely veiled) of a young girl, down on her knees in the midst of a desolate landscape. In a visual tour de force, Angeles paints an overblown purple stun of delicate flowers, emerging like an apparition with each exhalation.

In her current show titled “Hybrid,” these petals re-appear like an upturned Elizabethan collar, framing the face of an innocent child. Angeles christens the painting “She Will Grow into Something Beautiful.”

One imagines this child, a few years later, blossoming into the subject of “Parallel Botany,” a dual portrait of two young girls, one under sunlight, the other in moonlight, bisected by a sunflower plant, shooting heavenward, its roots flaring like the tentacles of an aquatic creature. By her own admission, Angeles has entertained the seed of a dream of being a botanist.

Inextricably the sunflower is associated with Vincent Van Gogh, who painted the subject by turns in its blossoming and withering. Van Gogh claimed the sunflowers for his own, but his friend Gauguin followed suit. Indeed, the sunflower even appears as motif for a wallpaper in his domestic scenes.

Van Gogh remarked: “It is a kind of painting that rather changes in character and takes in a richness the longer you look at it.”

For her own, Angeles depicts the sunflowers in an actual garden, in all their uncontrived, unruly glory. In realistic disarray, some of the sunflowers are shown with their stems bent, the others starting to wilt and wither.

The painting has a total disregard for symmetry, and yet the sweetly forlorn sight of these sunflowers could not detract from the fact of their superb execution.

But, of course, what pulls us into the heart of the show are the works to which Angeles has given the withering title “Hybrid.”

Angeles describes her images as “portraits of young girls with foreign blood.” More familiar to the public is the word mestiza, with its connotative allure of superior beauty, especially in non-Caucasian countries. The origin of the word may now sound unseemly. It is derived from the Spanish verb mestizar, meaning “to breed.”

So: a half-breed, or hybrid, then. In our country, we have pegged the standard of beauty according to Western characteristics: a fair complexion, a high aquiline nose, sparkling blonde hair.

Are we now surprised at the prevalence and popularity of skin-whitening soaps, rhinoplasty or nose-lift surgery, and the sale of peroxides?

In our acceptance of local movie stars, we are awed by the beauty of the mestiza. From various generations, we have idolized the likes of Rosa del Rosario, Carmen Rosales, Gloria Romero, Amalia Fuentes, and, in the present day, a Marian Rivera.

It took the superior singing and acting talent of one Nora Aunor, for the Filipinos to recognize in her unfading talent the meaning of true beauty.

And what of Angeles’ own mestizas? True to her own vision, they seem a breed apart, at least in their sense of spiritual isolation. They possess a withdrawn look, deeply introspective, one might say, lost in their own world.

One young girl, despite being seated frontally, looks past her audience, emotionally inaccessible, gentle in her refusal to ingratiate herself. Perhaps it is this headstrong character, this mystery, that intrigues us, for the young girl may just as easily will herself to fade away. One wonders if oblivion is her paradise.

The most daunting question that strikes the mind: Is it “Lazy Daisy” once again whom we see in the work “Bloom Oil”?

She holds a similar-looking, if not the same, book, this time tightly clasped on her chest. The dress she wears can be identified by the same frills on sleeve and mid-rib, the same flowing drapery dappled with hidden shadows. This time, however, she is lying straight on bed, gazing intensely into a world beyond reach, her penetrating eyes roaming in an unknown dimension.

The title may allude to the sunflower, suggesting that she may be the same girl in “Parallel Botany.” Indeed, such are Angeles’ alter egos.