Food you should eat in 2015 | Inquirer Lifestyle 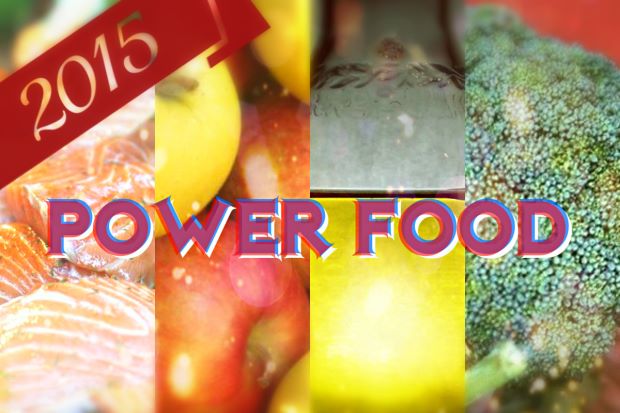 Start your best year ever, in terms of health at least, with a plan, a super food plan.

No one likes labels. Being called the fattest country in South-East Asia hurt, and perhaps it is a good thing, if it leads us to eat better. Start the year right with food that made the news in 2014 for their nutritional goodness. We’ve paired these superfoods with easy-to-do recipes so that you will stick to good eating and be on your way to better health.

Perhaps our collective resolution this year is to not only lose weight and gain health but to rid ourselves of the nickname.

Found in fatty fish, or in convenient tablets, omega-3 is a superfood that keeps on giving. Research shows that this inexpensive fatty acid can help you give up that nasty habit of smoking. How? Omega-3 protects parts of our brain that deal with stress and satisfaction – the reason nicotine addicts are still sucking on the cancer sticks. Taking omega-3, researchers found, can reduce cigarette cravings. Also, more omega-3 means better hearing, especially for women. A study found that higher consumption of fish rich in the fatty acid helped preserve hearing. No more mumbling under your breath and walking away anymore.

When faces trigger recognition but the names just refuse to leave the tip of your tongue, you know you are getting older. To boost your memory and keep the sizzling times of your youth from dissipating, have a cup of hot cocoa handy. Initial research finds that cocoa contains compounds that could reverse memory decline brought on by simply getting old. However, why stop there? Have a delicious chocolate dessert – just make sure the cocoa mass is high, and the sugar low.

Keeping the ticker in perfect running condition is essential. To lower your heart health threats, also called metabolic syndrome, researchers say to eat a lot of vegetable fats from olive oil to nuts. Usually found in Mediterranean diet, which is all the rage now, a study has found that cardiovascular risk factors diminishes substantially when people go on the diet. Another reason to try out Mediterranean diet – they can help you achieve better erections. Enough said.

Eat this: A nice salad of nuts, cheese, greens of your choice and extra virgin olive oil. Drizzle, toss and serve.

For those at risk of becoming diabetic (pre-diabetes), it may be good to munch on a handful of pistachios. A study found that a daily intake of 57g of the nuts, or a good handful, can  lower blood sugar and insulin levels. Researchers also found that munching on pistachios also helped the body better process and regulate insulin and glucose.

Basically all fruits and vegetables give you the benefits, however, you need to eat enough for it to work. A study from the UK said that those who at five servings a day, or even up to 7, had better mental well-being. If you want to have a strong mind that thinks faster and handles stress better, you need the greens, and the yellows, reds, and even purple.

Eat this: A delicious juice or yummy salad

Or this: Perfect Juice Recipes

So apples didn’t work out for Snow White, but it may for you. A study has found that cardiovascular disease risks were lowered by a whopping 40% when you have an apple a day. When you get tired of apples switch to another crunchy fruit, it works too. Researchers also found that daily consumption of fruits also lowers blood pressure and they also lived longer. The risk of death, researchers say, can reduced by 32% compared to those who didn’t eat fruits.

This powerful Asian ingredient is all you need for holistic well-ness – from diabetes to improving cognitive function, says a study. You would not need to eat large quantities of it, in fact, a gram of turmeric or about two pinches of the yellow wonder a day is sufficient.