They found refuge and meaning in art | Lifestyle.INQ ❮ ❯ 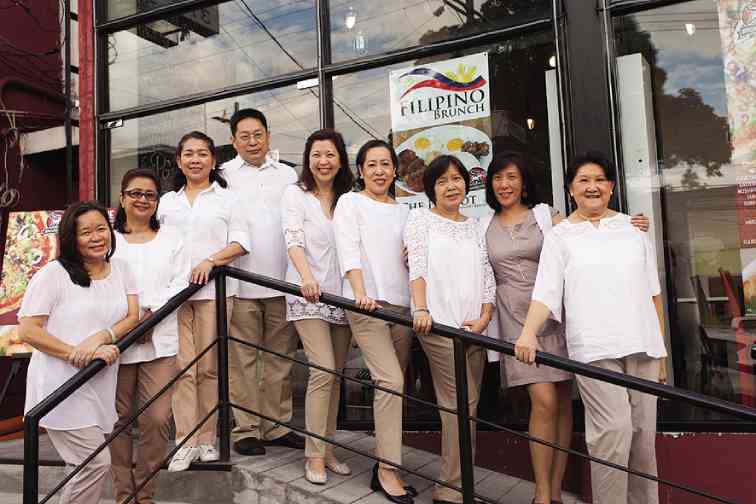 They found refuge and meaning in art

This cozy corner of a restaurant in Quezon City is never quiet on Mondays when two lawyers, two homemakers, a high-profile cake designer, a food technologist, a retired interior designer, a teenage student and the businesswoman who owns the joint, hold their weekly art class.

But seeing them in action one afternoon, an observer would note that the art sessions are mostly a cover.

Green Monday (named after the members’ constant state of mind) is part sorority, part Joy Luck Club (without the mah-jongg), part bull session, part diners club. The members eat and tell stories. Once in a while, they hold a paintbrush and do their thing.

The company is golden. No wonder many stay long after the restaurant has closed for the night.

Cake designer Penk Ching invited Inquirer Lifestyle to see her (mostly) ladies in action. Eight of the members are female. Nineteen-year-old Daniel Ratilla, a Fine Arts student, seems like the odd man out. He insists, however, that “we’re one big happy family. Everyone is very motherly.”

Their mentor Ng will also show some of his works.

Ng, a well-regarded painter, had been supervising the group regularly for about three years when he suggested that its members consider holding an art exhibit. Their first was held last year.

Ng noted then that the members were having such a good time during their Monday sessions and feared they might veer away from their intent of learning and improving their skills.

“Preparing for an exhibit would give them focus. It was supposed to be a disciplinary measure and to develop their confidence. There was a need to direct their creative energy into something instead of laughing it out,” Ng explained.

True, the Green Monday meet that Inquirer Lifestyle witnessed earlier this month had a clubhouse vibe. No easels. There was more food than works in progress on the tables.

Everyone was free to critique another’s work. Just make sure you mean it.

Apparently, it is the basic Green Monday rule.

Each member offered different details about how they joined the group.

Bottom line is, after having it up to here with various combinations of work/studies, marriage, child rearing and other family concerns, all felt this restlessness, looked for something, and found that refuge in art. 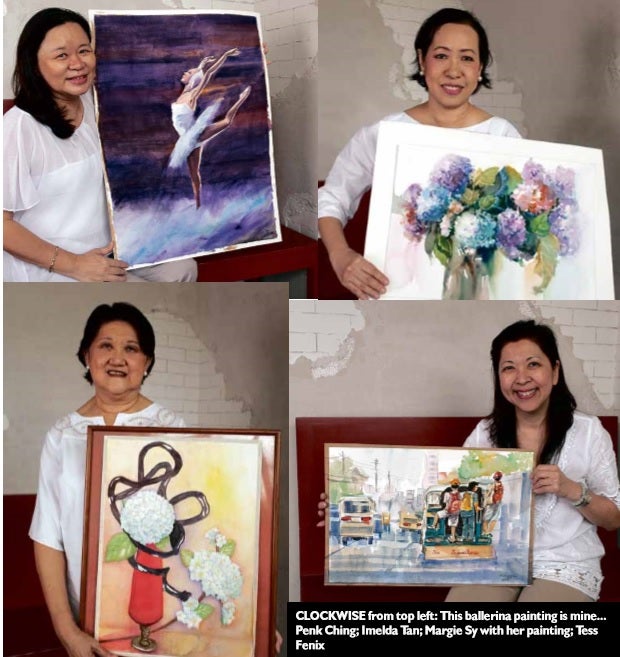 “De-stressing” was a word that often came up, as the members turned wistful when asked how Green Monday and art made a positive impact on their lives.

Imelda, the food technologist, said she enrolled in a short course on art at the University of the Philippines College of Fine Arts with Marigene “because I want to learn something new all the time.”

After surviving cancer, Imelda thought of art as worthy challenge. The wager paid off.

“I learn something new every single session, but it is something I cannot quantify. It feels good. You see creation better, you see tiny details, know how light is reflected on a certain object, and know how each plane or surface relates to another,” she said.

Marigene noted how painting taught her to engage her five senses. “More than an outlet, art is an expression. I find joy in painting,” she stressed.

Corinne offered a realization why painting provided superb stress relief for alpha females. Painting, she explained, gave a person “control of what takes place” on paper or on canvas.

But there was also a contrasting lesson to be learned, she added.

“When doing a watercolor in particular, there is a need to befriend the medium. Bigyan mo ng allowance. Learn to listen and accept the nature of the material. Malalim ang painting. As you experience it, there are insights that develop while you’re engaged in it,” she said.

Penk designs cakes while Tess used to do interiors. While both are involved in art-related ventures, they also maintain that painting has opened a different door for them.

“A cake belongs to another person,” Penk said. “It is done the way the client wants it. Although cakes are also elegant and beautiful, a painting is a reflection of my fulfillment. It is an expression of myself.”

Penk, a frustrated ballerina, will display watercolors of these dancers that show graceful and dynamic movement.

Tess said designing spaces for other people brings its own satisfaction. However, the job was still about making a space with specific dimensions and physical limitations designed for another person.

“Painting allows your own interpretation. Interior rendering is for a client. You interpret a design the way you think the client would like it,” she noted.

Tess said it was only when she joined Green Monday as a unique walk-in that she began learning about painting materials.

True, she used similar stuff while doing watercolors of designs.

“But here I learned about different qualities of paper and watercolors. It’s a must pala to use professional materials,” she said.

Margaret agreed. After witnessing the inconsistencies of results from standard-issue watercolors used by children, she said anyone serious about learning to paint should also use serious materials.

Apart from quality instruments, Margaret advised those interested in learning to draw and paint to “go to a good teacher who can motivate, one from whom you can learn the basic shapes, and [who can] help you create anything and everything. Once you see objects as shapes and connect them to everything else … wow!”

Many of the women mentioned Fernando Sena, a popular art teacher, as their first real mentor.

Miriam was already in her 50s when she started taking art more seriously. By then, her children were already grown, and she was looking for something more fulfilling other than her work for a realty company.

“I had been competing in art contests in elementary, but my parents said there was no money in art. Besides, it was expensive to go to art school,” she recalled.

Miriam’s work is quickly recognizable because she includes Biblical passages in her paintings. She wants to use art to make people realize that everyone has an individual purpose and there is a reason for each one’s talent.

Lea talked of the same epiphany. After surviving law school, only to abandon it in favor of raising a family, Lea now sees art as a daily requirement that helps her cope with whatever’s on her full plate.

“Initially, I learned art to de-stress, but now it has become something I have to do. I also learned to appreciate more what God gave me. Art has made me more sensitive, develop a trained eye to look at things in a different way,” Lea said.

“I have become more sensitive to light, for example. I look at a flower and see how beautiful it is. Ang galing gumawa ng Diyos,” she exclaimed.