High-end dining is back with a vengeance | Lifestyle.INQ ❮ ❯ 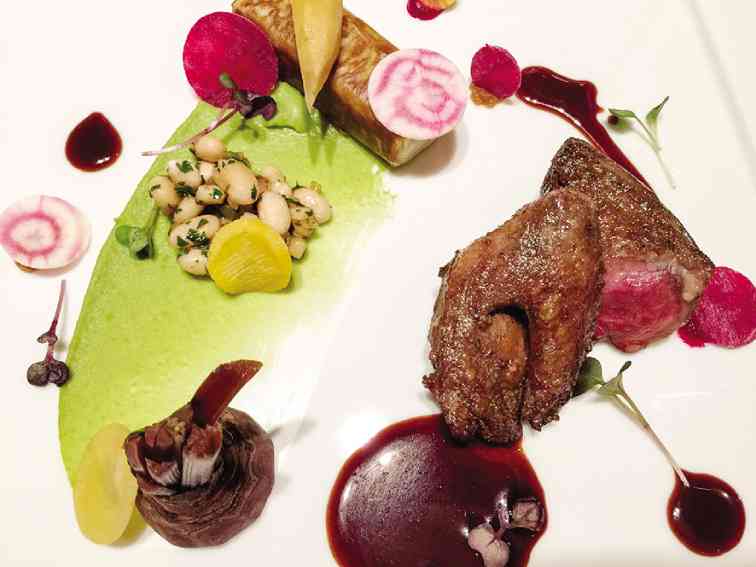 High-end dining is back with a vengeance

There are no two ways about it: The Tasting Room is a restaurant in the grand sense of the word, with plush carpets, starched white tablecloths, and crystal stemware.

It’s a welcome antidote to the downmarket drift of most hotel restaurants, as well as the slew of “hip,” too-cool-to-serve-proper-food restaurants where everything is studiously casual and understated.

This is the high end back with a vengeance, so it’s time to polish off the cuff links, oxford brogues and table manners, and be prepared to open your wallet wide.

Our previous encounter with City of Dreams had been as guest in one of its many press launches off-site before the actual opening. That made us curious to visit the complex, as a customer. We wanted to see, among other things, what three hotels, a casino, and a giant golden egg on the strip of reclaimed land on Roxas Boulevard looked like.

It was every bit as enormous, extravagant and over the top as I imagined, and more. We wandered through cavernous, empty, sound-deadened corridors full of staff in full regalia. We didn’t need another Nobu experience, but The Tasting Room at the Crown Hotel came recommended.

After being asked by the guard, the lobby footman and the maître d’ if we had a reservation, we were shown into a completely empty restaurant.

“We have a completely new dining experience,” announced the maître d’ as he handed us the menu, which in itself set off alarm bells in my head, because every other restaurant we’d been to last year had trumpeted an entirely new way of dining. We’re actually quite satisfied with the ordinary way of dining, but there appears to be a crusade to make menus less and less comprehensible.

The “completely new” concept at The Tasting Room is, essentially, to blur the distinction between appetizers and main courses. This way, your five (or six, seven or eight) courses could follow a classical progression, or you could, conceivably, order five main courses and no appetizers, or for suicidal diabetics, five desserts.

We went the traditional route with an entrée, a seafood dish, a lighter main course followed by a heavier one, and then dessert.

Listening to someone describe their meal in excruciating detail is about as enticing as hearing someone else’s chewing, so we will just suggest what we felt were the best of the dishes, which we would have if we were to return.

The 52-degree egg with various umami bits and bobs thrown in was a bit of a cliché, but that didn’t make it any less delicious. This could then be followed by the lobster bisque, which served as both soup and seafood fare. The pigeon was perfectly cooked, bloody and red on the inside (though not frighteningly rare, as the French like to serve it).

Even if you think you’ve tasted all the wagyu variations possible, the complexity of flavors of the wagyu main course with truffled mashed potatoes still made it the best item on the menu. (The lamb, which was finished in a censer of smoldering dried rosemary leaves, would have been a close runner-up if it had been left slightly pink; it was dry and gray.)

For dessert we all had the pistachio soufflé, so we couldn’t really compare it to the other choices, but a very well-made soufflé it was indeed, with a somewhat superfluous shot glass of cardamom milk to accompany it.

Because we were clearly not mainlanders flush with casino winnings, we weren’t subject to the powers of suggestion of the maître d’, who left us alone with our bottle of San Pellegrino. But as a few other guests drifted in, we overheard snippets of conversation in which he waxed lyrical about Burgundy vintages, tiptoed around the touchy subject of new world wines, and gently derided Italian wines and produced bottle after bottle.

A good sommelier is not just one who can pair wine with food, but pair wine with people; and a skilled one can add significantly to a restaurant’s revenue, while not alienating the customers on a budget.

Our meal was by no means inexpensive, but as far as restaurants like these go, it’s like getting a 3 series BMW or a made-to-measure rather than bespoke suit: an entry-level nibble that gives just a taste of the high end.

For people like us, it’s as far as we’ll go, but we can imagine others easily dropping three times or more what we spent on the full eight courses with wine pairings, aperitifs and digestifs, and an exorbitant bottle of champagne.

The cost of luxury

There is plenty to criticize—from our main courses arriving a few minutes apart to a heavy hand with the emulsifiers to an annoying flicker in the light source.

But the biggest negative for us, which is not something that can or should be fixed, is the sense of impersonality. It’s a luxury dining room that could be anywhere in the world, hermetically sealed off from the outside world—but then that’s the point of this place.

The chef, who is not named, cooks modernist food, but doesn’t go too wild with the spheroids or disappearing textures. All we can tell is that apart from being extremely liberal with the truffle shavings, he seems to have a predilection for sweet pairings (beetroot, glazed Iberico ham, lattices). Most of the clientele that the restaurant is aimed at will not mind; the chartered planes of high-rollers will not want a reminder that they are in dingy Manila.

Visiting the complex is like a brief sojourn to another world, not necessarily one we would like to live in, and much less one we could afford. But once in a while it’s nice to get away, just as once in a while (a very long while) it’s nice to pretend to live a lifestyle that we don’t have. Despite the prices, you do get what you pay for, and you don’t leave the restaurant hungry.

For those with the money to spend, this is as good a place to burn it as any. The high end is back in town.