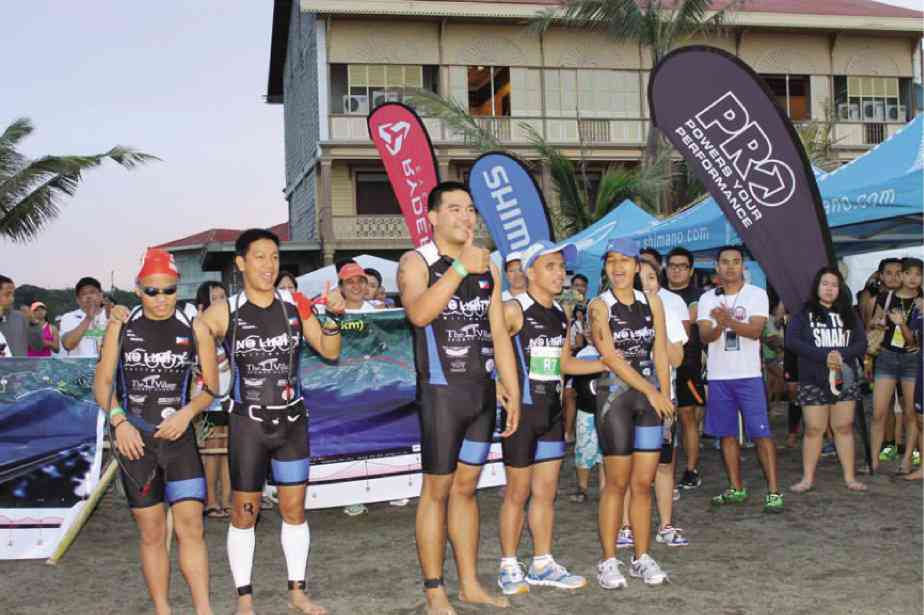 Coach Anthony Lozada and his brother Angelo have an exemplary, if incredible, way of motivating their athletes, following in the footsteps of their dad, the late swimming coach Bert Lozada. They believe that anyone can excel in swimming.

And this belief could never have been put to a greater test than when Anthony started training 14-year-old twins Joshua and Jerome Nelmida. The twins were born without corneas.

However, this didn’t hinder them from trying out sports. They started swimming at age 9, and recently started joining triathlon relays.

For Anthony, who is now a national team triathlon coach, it was never about monetary gains.

“I find joy in seeing these kids achieve their dreams,” he said. “I am here for sports development and for the country.”

Anthony has a good track record. He was the Philippine swim coach for the 1996 Athens Olympics, the national coach for the 2014 Asian Triathlon Championships in Kazakhstan, and the coach of Vicky Deldio, the first triathlete to qualify for the 2014 Youth Olympic Games in Nanjing, China.

As a former swimmer myself, I experienced what it was like to train under Coach Anthony. Apart from the skills he can teach, Coach is a great motivator—who doesn’t let go, ever. After my three-year hiatus from the sport, Coach persuaded me to swim again so that I could train alongside the Nelmida twins.

I got to watch the twins do warm-ups. The coach would make them do a few laps of freestyle, then butterfly kicks.

The twins were trained to count the number of kicks and strokes they must do to reach the other end of the pool—and not hit the gutter.

Unlike in regular swimming lessons where students watch the coach, Anthony had to make the twins feel the movements, holding their hands and arms and letting them feel the movement of the water when they did the strokes correctly. Surprisingly, their forms were pretty good, Anthony said.

Anthony even used a stretch cord to let the twins swim more freely. The chord was attached to an able-bodied swimmer—which happened to be me one training day—and to the twins. I swam first, leading the swim route for the twins, and tapped them at the end of the laps. The cord did not in any way give them an advantage; Joshua and Jerome were really swimming on their own.

For me, it did take a little getting used to —to be attached to two other people while swimming. Coach Anthony said that it was normal for the twins to tap my feet while swimming. This was an indication that they were on the right path, and also a signal for me to swim a little faster because they were gaining on me.

This stretch cord has become very handy in open water, especially during the twins’ first race in the Bataan International Triathlon last November.

If there is something people note about the Nelmida twins, it’s their robust optimism. No one ever hears them complain, even if it’s a tiring workout or very cold pool water in December weather.

They have even formed a team called No Limits Tri Team, whose members have autism and Down syndrome.

“Hindi hadlang sa amin ang kapansanan (My disability is not a hindrance),” Jerome said. “As long as you’re prepared and work hard for it, go for it.”

They have many plans for 2015, including joining more races, aquathlons and even trying out for the Philippine team.

“We want to develop their aggressiveness, and that there are no limits for them,” Anthony said.

If there’s any problem at all, it’s finances. But thanks to donors and supporters, the twins were able to buy a tandem bike, which will be shipped from the United States.

“We owe it to them, to keep on going,” their mom Annette said. “They keep on inspiring people, and hoping more can join the team.”

For their latest race, which was held in Bataan, the twins prepared for over six months. It was their first time to swim in open water. Fellow racers, including top triathlete Nikko Huelgas, and other spectators, were surprised initially to see the twins participating. But they ended up cheering them on during the race.

The twins enjoy a regular teener’s life. They’re in the regular class at Pedro E. Diaz public school, they love to watch Philippine Basketball Association and Azkal games, and are also into photography. They even play the piano and sing.

“Whether you have a disability or none, everyone has a special role to play,” the twins pointed out.

When they were toddlers, Joshua and Jerome were virtually sealed off from the world, and had a hard time interacting with people, recounted their mother. But she underwent special training on how to take care of the blind, and has been the most supportive of parents.

“We want to reach out to more parents who have special kids, that their children should not be cooped up in their homes. Encourage them to develop their talents,” Annette said. “They can still do what normal people do.”

Actually, the twins were able to achieve feats not everyone can do, like overcoming the fear of swimming in open water, or trying out for triathlon, running and biking.

The twins are preparing and planning for their next race, and they are getting stronger.

“I may not be able to guide them in the swim leg eventually because they can swim faster than me,” Anthony said in jest.

But it’s a scenario that the twins would be happy to face.