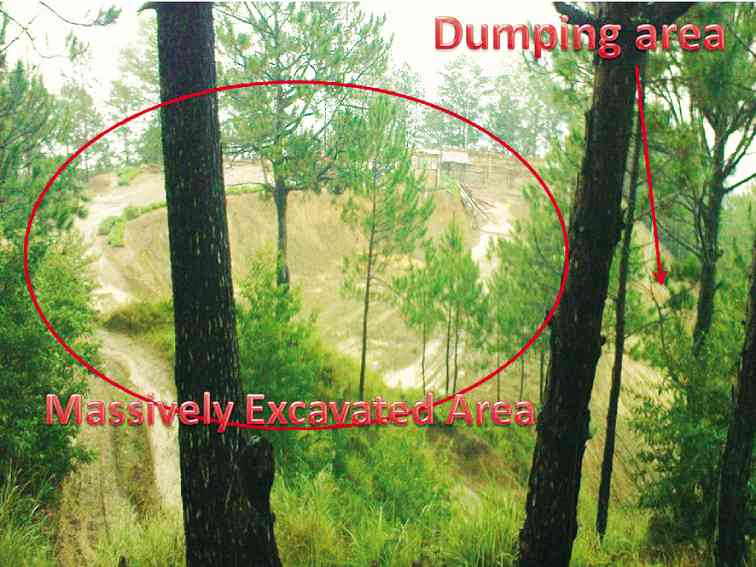 A PHOTO taken through joint efforts of the DENR and private citizens shows how a portion of the watershed where trees used to stand is now bare and ready to accommodate a private road.

Did this Baguio solon just bulldoze 761 trees for a private road?

Civic leaders in Baguio City are up in arms against their congressman and want two Cabinet members and leaders of the House of Representatives to investigate his alleged involvement in wide-scale environment destruction in Benguet province.

His critics also want lone Baguio Rep. Nicasio Aliping Jr., a member of the ruling Liberal Party (LP), suspended from Congress until the cases filed against him are resolved.

Aliping and his coaccused allegedly violated the Philippine Clean Water Act of 2004.

The congressman was said to have hired private contractors in June 2014 to pave part of Mt. Cabuyao in Sto. Tomas, Tuba, Benguet, to make way for a private road inside a protected watershed. This was reportedly to gain access to his property in the area, the civic leaders claimed.

In doing so, backhoes owned by the contractors reportedly tore down more than 700 trees and caused massive soil erosion.

This in turn contaminated at least three freshwater springs that have been sources of drinking water for thousands of residents in Baguio City and Tuba for decades.

Inquirer Lifestyle tried to contact Aliping through his website and by calling his office at the Batasan complex in Quezon City. Calls to his Batasan office were either not answered or got a fax tone in reply.

This reporter also did not receive any response to a query posted on Aliping’s website.

But in an interview shortly after the discovery of the road project, Aliping told Philippine Daily Inquirer he was not involved in excavating sections of the Sto. Tomas watershed.

He confirmed, however, that he had bought land inside the watershed.

The letter to Paje said Aliping had no permits either from the Department of Environment and Natural Resources (DENR) or any related government office when the contractors mowed down the trees to create the private road.

A joint affidavit-complaint lodged by local DENR employees and several private individuals indicates that the road already measured 2.64 km as of mid-2014.

Meanwhile, De Lima was informed that “the whole Benguet Provincial Prosecutors’ Office led by chief provincial prosecutor William T. Bacoling,” tasked to probe Aliping, has filed a motion of voluntary inhibition from the case a month after the complaint against the congressman was filed.

Pine Cone said Bacoling reasoned that his first wife “was related to one of the respondent contractors… Capuyan,” hired by Aliping, while contractor Aquino “is a fellow member of the Masonic Fraternity.” (This apparently meant that Aquino has personal ties to some prosecutors.)

“To the citizens of Baguio and Tuba … it smacks of dereliction of duty and obstruction of justice favoring (Alping et. al),” the letter to De Lima added.

Pine Cone also noted that Aliping, through a resolution he filed in the incumbent 16th Congress, supports the creation of a “Regional Prosecutors’ Office for the Cordillera that will redound to the benefit of the current Regional Prosecutor.”

A regional prosecutor is the one authorized by law to designate a new government prosecutor in case evidence is eventually presented against Aliping in court.

Copies provided to Inquirer Lifestyle showed the signatures of Pine Cone chair Maribel G. Ongpin; Bishop Carlito J. Cenzon of the Diocese of Baguio City, who signed as director of Bantay Baguio; and Dr. Romulo A. Paraan, chair of the Baguio Heritage Foundation Inc. in the letters addressed to Paje and De Lima.

The three individuals have also written House Speaker and LP stalwart Feliciano Belmonte Jr., warning that Aliping faced “at least” two criminal cases filed by the DENR and the Baguio Water District in connection with the road construction and its aftermath.

The letter to Belmonte also questioned the legality of the construction of Aliping’s property in the watershed that the law classifies as a protected area.

Belmonte was informed of how government prosecutors inhibited themselves en masse about a month after the cases against Aliping were raffled off for investigation.

“The result is that the cases have been stalled, which is to the advantage of Congressman Aliping. Thus, he is suspected as having a hand in this turn of events,” the Pine Cone members asserted.

The three urged Belmonte to ask his political party and the House ethics committee to “ask (Aliping) a few questions and determine whether he should be suspended until the cases (filed against him) are resolved without his interference.”

House ethics chair Joaquin Chipeco Jr. was given a separate letter, this time signed by Bishop Cenzon, chair Paraan and chancellor Raymundo D. Rovillos, PhD of UP Baguio, calling Chipeco’s attention to Aliping’s act of felling 761 trees “without permits and without an Environmental Compliance Certificate” so he can have his private road.

“This blatant disregard for the law and unethical act of a lawmaker and a public official who ran his campaign on the slogan of ‘Para sa Kalikasan’ is a serious betrayal of trust of the citizens and must violate the rules of conduct of the House ethics and privileges committee,” the accusers stressed.

“We ask that you conduct the necessary investigation of this case and extract the appropriate punishment/penalty as dictated by the rules of (your committee),” they added.