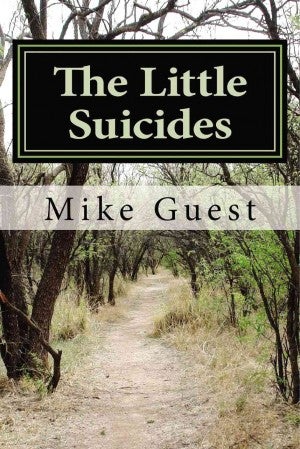 This is a story about a story that spans continents and cultures, about the ugly and the beautiful, exploring the familiar and the unknown. It is about a novel you haven’t read but probably should. It’s about a Canadian teacher living in Japan who wrote about the Philippines. His name, fittingly enough, is Mike Guest.

How did the Philippines wind up at the heart of his book? “Even upon my first visit in the late 1980s I sensed that the country was ripe for stories. The land is fertile, the weather is fierce, the swell of humanity seeps into every pore,” Guest says via e-mail from Japan. “I’m surprised that the Philippines isn’t used as a film or novel setting more often.”

“The Little Suicides” follows Canadian photographer Mitch Nevin who leaves behind his family in Toronto to search for his missing friend Mark Reddox. After looking for Reddox in Japan, Nevin discovers that his friend vanished after arriving in the Philippines. He goes there to continue his search, coming face to face with the skin trade in Angeles City, where he meets Vera Cabalquinto, the bar girl with the heart of gold. Nevin struggles with conflicting motivations as he presses on in his dogged pursuit of his disappeared friend.

In the process, Guest writes about the First World crashing into the Third World, the White Man’s incongruous mission to save those unlike him, the prize and price of reinvention—and the nuanced beauty and subtle sadness of life in the Philippines. Guest seems uniquely qualified to write about all these things.

Originally from the Vancouver area, Michael Robert Guest has always had a deep interest in words growing up. “I’ve always tried to cultivate that skill,” he says. “I’ve also always had an abhorrence of the formulaic and the predictable.” After earning a Philosophy degree at Simon Fraser University, Guest got a master’s degree from Regent College, a teaching certificate from University of British Columbia and a master’s degree in Applied Linguistics from Aston University in the United Kingdom.

He then decamped to Japan, where he has worked for the last 25 years. Then Guest made his way to the Philippines—and kept coming back. “I’ve visited about 10 times, sometimes for R&R to detoxify from life in Japan and at other times to attend academic conferences,” he explained. “My first trip was as a backpacker in about 1986 and some of my experiences from that trip inform ‘The Little Suicides,’ such as the bus crossing the mountain pass that had been washed out by typhoon rains.”

“The Little Suicides” is bracingly honest, as Nevin looks at the contradictions of Filipino society from an outsider’s viewpoint. While it is unflattering to the Philippines, it is also provocative and piercing. There is an authenticity to the myriad and minute details that Guest loads the book with. Filipinos may flinch when faced with the “surreal and sad” scenes set in the country—but they will also immediately understand that these scenes ring true.

One can credit Guest for having done his research. “I’m not a prude. I did a lot of talking to people in ‘the trade,’” he says. “Personally, I was fascinated by Balibago, this island of vice inside Angeles City, and I could understand how both workers and mongers could get drawn into that black hole. But, to be honest, I couldn’t handle the vibe for more than a few days. After all, I am a family man. Regardless, all the locations mentioned in the book are, or at least were real. And I found inspirations for all the local characters in the book there.”

Guest understands that some Filipino readers may not like his book for its “negative image” of the country. It’s something he feels deeply. “Yes, I am worried about that because I personally love the Philippines and I very much hoped to avoid the tired, banal, ‘white man goes to developing country and is shocked and repulsed’ motif. Yet, at the same time, the protagonist, Mitch, initially only knows what he has heard on the news about the Philippines so his initial view is jaded. But, to be honest, many of the things he encounters actually do greet foreign visitors, especially those from Western countries. To be honest, I think you have to be accurate about a location in order to show affection for it, as opposed to writing a fluff piece. But if readers stay with the novel until the end they will see him gradually developing an understanding of and a wider-based affection for the country. He castigates the racism uttered by some expats he encounters in the book and is very much aware of his own displacement, his visual outsider status. But he starts to catch on.”

Having written other things like English textbooks, Guest wrote the first draft of his first novel in eight months, then four more months to edit it. The resulting product, just over 250 pages, is a lyrical, gripping mystery about one man’s disappearance and another man’s appearance in a country not their own. It brims with verisimilitude and insight about the meaning of identity and faith.

Since its release, “The Little Suicides” has received positive reviews. Kirkus Reviews says: “On top of a compelling narrative and tidy prose, Guest offers keen insight into the dynamics of male-female relationships, the conflicts between different cultures, and the contrast between aspirations and reality.

As much a philosophical novel as a travel story, Guest’s first book is well worth a read.” IndieReader adds the book is “an insightful novel that follows its protagonist through a journey that culminates in an expanded sense of racial privilege and moral ambiguity.”

Guest says that living in Japan, far away from traditional centers of publishing in English, having a full-time job and a family, as well as lacking the means to find an agent or a big publishing house, made him self-publish the book.

“But publicity and marketing, particularly for a self-publishing first-time author living in Japan, is a major know-how hurdle,” he admits.

As a result, “The Little Suicides” is most easily available from online vendors such as Amazon.com and Barnesandnoble.com, though Guest reveals he left a few copies at National Artist for Literature F. Sionil José’s Solidaridad Bookshop in Ermita, Manila (tel. 2541068). Interested readers can also contact Guest directly ([email protected]).

As a first novel, “The Little Suicides” is a solid inaugural effort that is worth a look. “The story is deliberately morally ambiguous so I hope it takes the reader on a journey, as opposed to the expectation that they’ll be arriving at some resolving moral destination,” Guest says. Guest is now working on his second novel. “I’m fleshing out an idea revolving around the aftermath of the tsunami that hit northern Japan in 2011. Perhaps I am attracted to the question as to how people react to disasters—as Typhoon “Haiyan,” Pinatubo, and the Ormoc tragedy are all mentioned in ‘The Little Suicides.’”

In the end, the book’s pages flip figuratively from a Canadian maple leaf to the rising sun before settling for good on a background with three stars and a sun. “The Little Suicides” author Mike Guest remains both haunted and amazed by what he has seen here: “Can anybody not be saddened by the sight of homeless children? However, this source of sadness is also the source of the most amazing thing about the Philippines—the fact that despite many people living in dire straits they maintain their dignity, their resilience, their openness, their accessibility.”