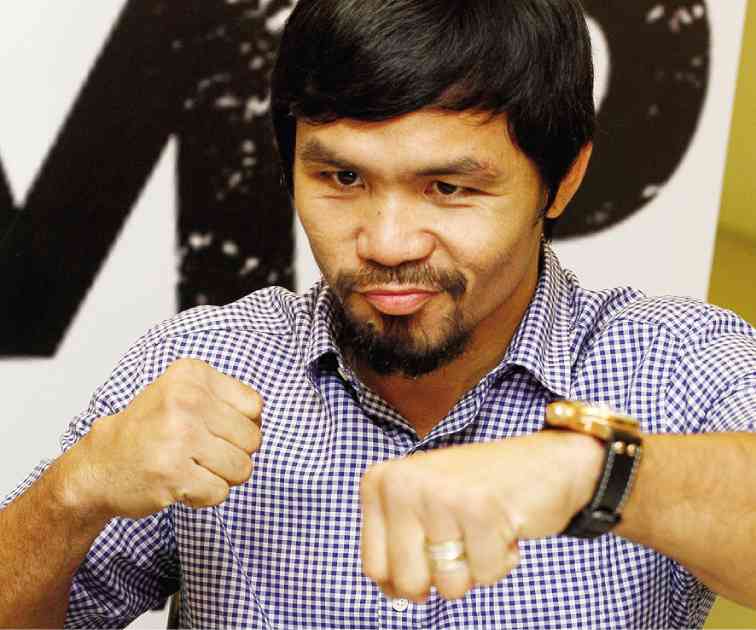 GENERAL SANTOS CITY–As a fighter, he has had his share of being judged fairly and unfairly.

Now, world eight-division boxing champion and Sarangani Representative Manny Pacquiao will experience first-hand how it feels to be a judge.

Not in boxing, however, but at the 2014 Miss Universe beauty pageant to be held in Jan. 25 in Doral, Florida.

“I feel honored and I consider it a once-in-a lifetime opportunity to judge in a Miss Universe contest,” Pacquiao told the Inquirer.

Pacquiao said he “never had any second thoughts” receiving the invitation to be among the panel of judges during the beauty tilt.

Pacquiao said he will try his best to be fair in giving judgment to the contestants.

Eighty eight contestants from across the globe will participate in this year’s pageant which will be split in three categories: swimsuit, evening gown and interview.

Gabriela Isler, Miss Universe 2013 will crown her successor at the conclusion of the three-hour telecast. The Miss Universe beauty pageant will be seen via satellite broadcast in approximately 190 countries and territories.

Mary Jean Lastimosa, also a Mindanaoan like Pacquiao, will represent the Philippines in the 2014 Miss Universe contest.

Pacquiao added he will ask God’s guidance before making his choice.

“The contest has a very noble purpose, you know. The pageant is just another way of paying tribute to God’s unequalled aesthetic ability. Man is God’s masterpiece. So, I’m really excited,” Pacquiao said.

Aside from Pacquiao, other judges include TV host and shoe designer  Kristin Cavallari; TV and film actor William Levy; star of hit show “Vanderpump Rules” and “The Real Housewives of Beverly Hills”
Lisa Vanderpump; as well as,  Louise Roe, Fashion journalist, author and host of “Plain Jane” on MTV International and the upcoming TLC fashion series, “Style By Jury.”

Pacquiao and his wife, Sarangani Vice Governor Jinkee, will fly to the United States on January 15 to honor some commitments and “Hopefully to sign the contract for my next fight.”

According to Pacquiao, the negotiations for the mega-buck fight with American undefeated boxer Floyd Mayweather Jr. are “almost done.” He refused to elaborate, though.

On January 22, the Pacquiao entourage will fly to London to meet with Prince William in a private dinner and tour around the Buckingham Palace.

They will fly back to the US on the 24th to catch up with the 63rd Miss Universe beauty Pageant.