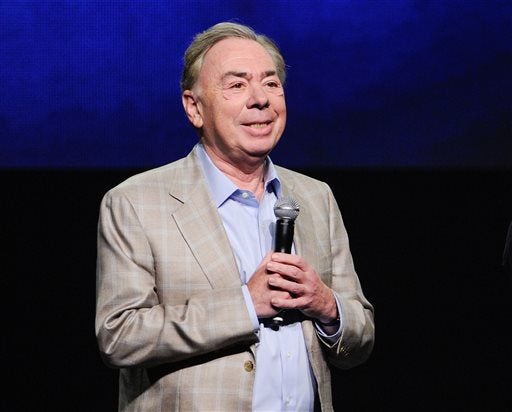 In this April 4, 2014 file photo, composer Andrew Lloyd Webber announces the new "Jesus Christ Superstar" North American arena tour at a press conference in New York. A musical version of the 2003 Jack Black movie "School of Rock" will start in November, with an opening set for Dec. 6. Composer Andrew Lloyd Webber and lyricist Glenn Slater will write new music to be added to some songs featured in the movie. AP

NEW YORK — Broadway is looking for pint-sized rock stars to join perhaps the coolest school band ever: the one onstage at “School of Rock — The Musical.”

Open auditions for singers 9-15 will take place in New York on Jan. 24 at Broadway’s Winter Garden Theatre, Los Angeles on Jan. 17 at Screenland Studios and Chicago on Jan. 24 at the Actor’s Equity Association branch. Hopefuls are asked to bring a photo, resume and be ready to sing a rock song.

Those who also play guitar, bass or cello are encouraged to bring their instruments. Performers who play piano are asked to be ready to play. Those who play should bring their sticks.

The stage version of “The School of Rock” will stay close to the plot of the Jack Black-led 2003 film, in which a wannabe rocker enlists his fifth-graders to form a rock group and conquer the Battle of the Bands. The film featured songs by The Doors, Cream, The Black Keys and Led Zeppelin.

Composer Andrew Lloyd Webber and lyricist Glenn Slater will write new music to be added to some songs featured in the movie. Previews will begin on Nov. 2 at the Winter Garden Theatre, with an opening set for Dec. 6.

The story will be adapted by Julian Fellowes, who created “Downton Abbey” and be directed by Laurence Connor, who co-directed the latest “Les Miserables” on Broadway and “Miss Saigon” in London.

A separate Los Angeles casting call to find an actor to play the Jack Black character will be held Jan. 18. Candidates should be in the late-20s to 30s, with a “high pop/rock voice.” Hopefuls who play guitar or bass are asked to bring their instruments and be ready to “rock out!”