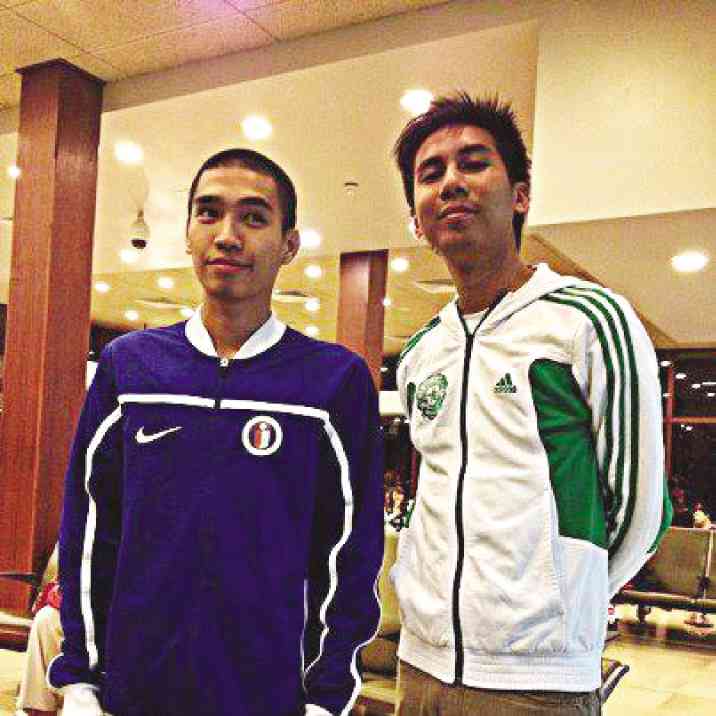 According to urban legend, in the 1930s, after the La Salle Green Archers beat the Ateneo Blue Eagles in a championship basketball game, La Salle students threw pieces of fried chicken at the gate of Ateneo’s Padre Faura campus. (Chicken, being the next best thing to fried eagles.)

This may have been true or not, but the fact is, every Ateneo-La Salle game is a showcase of the “best rivalry in Philippine sports”—and that school rivalry has spilled over to everyday life.

Ateneans and La Sallians compete in business, in professions and fields and in soirees with exclusive girls’ schools. Somehow there would always be the question of who is better and comparisons ensue.

Of course, there will be biased answers, the most interesting ones coming from those who have studied in both schools. There are Ateneans who have transferred to La Salle, and vice versa.

Why did they move to the other side? What are their experiences and best moments in both schools? Who do they cheer for? And, most important, do they view themselves as Ateneans or La Sallians?

Can an Atenean and a La Sallian be best friends? Can they fall in love with each other?

Jake Bo-ot and JD de la Cuesta are members of the Blue Babble Band and Battalion, respectively. They both held important positions during their stints as Babble members. Jake was the lead bass drummer of the band in 2004 to 2005, and JD was captain of the Battalion in 2006 to 2007.

Both were also members of the De La Salle-Zobel pep squad in high school. They both wanted to pursue a career in law and wanted to go to the Ateneo School of Law.

Even if Jake did not pursue a law degree, he believes that entering Ateneo was one of the best decisions of his life.

Being a member of both squads was among their greatest memories in both schools. JD said, “If hindi ako nag-pep sa Zobel, malamang hindi ako Babble sa Ateneo. I enjoyed that one year with the pep squad so much that I fell in love with cheering. So I wanted to do it again at Ateneo, kahit alam ko na rival school siya.”

JD feels he is more Atenean than La Sallian, since he spent eight years in the Loyola Heights campus and earned two degrees—and only four years of high school at La Salle.

For Jake, four years of Ateneo education were enough for him to consider himself more of an Atenean.

“Even if I spent only four years there versus 13 years in Zobel, my time at Ateneo truly molded me into the person I am now. It provided such a holistic education and formation that I find myself so connected with everything the university stands for,” he said.

Another pair who were once La Salle students but are now at Ateneo are Nico Elorde and Gwyne Capacio.

The duo are used to the pursuit of excellence: Gwyne has been a member of the Juniors’ Mythical Five twice, and Nico has been part of it once. Both have had championship stints with both teams—with the Junior Archers in 2007 and a back to back for Gwyne (2011 to 2012) and Nico’s first (2012) with the Blue Eagles.

Of the two, it was Gwyne who transferred to Ateneo after high school. Nico played for one year with the Green Archers before joining the Blue Eagles.

For them, Ateneo gives quality education. But they had to make adjustments; they were entering a new environment and had to make new friends.

For Gwyne, time management was a problem since college had a more flexible schedule than high school.

But even if they now play for the Blue Eagles, Gwyne and Nico say they have not lost their love for La Salle, which has treated them like family.

They both sing the Ateneo and La Salle alma mater songs, no matter who wins.

As for extra motivation in playing against their former school, they treat it like any other game. Gwyne says he does his best as an Atenean to help the team. Nico says the rivalry is just on the court. Once the game is over, he is friends with former teammates: “The rivalry is a small but significant part of the friendship.”

Atenean Miguel Lizada and La Sallian Miguel Quizon developed their friendship at LiveJournal, a social media site that was popular in the early 2000s.

Lizada, fondly called Migoy by Ateneo students and colleagues, says: “It was quite normal for strangers who enjoyed reading each other’s blogs to add each other as contacts or to follow each other’s blog. Eventually, we developed a kind of brotherly fondness for each other and became really good friends after.

“We confide in each other our personal expectations and heartbreaks, among other things. We love literature and we’re both teaching.” They’ve grown so close that Miggi (Miguel Quizon) visited Migoy twice in Singapore when the latter was doing his postgraduate studies.

With a group of friends, the two have gone on trips to six countries.

Migoy says it actually helps, when watching Ateneo lose, that he has a La Sallian best friend, since “it cushions the pain. Then we move on and have dinner or coffee.”

For Miggi, what matters more than the rivalry is enjoying the game. He is happy sharing the fun with his best friend.

Migoy says something particularly touching about their friendship: “As I fly, I will always have an ‘archer’ watch my flight, in the same way that I am privileged to occasionally lend my friend a bird’s eye view on his personal journeys in life.”

Sports photographers and couple Mon Rubio and Mandy Mangubat met at a birthday party of a common friend. Mon is an Atenean and Mandy is a La Sallian.

Good friends first, they became a couple soon after.

For them, the rivalry was never an issue. “I am the one who usually jokes about La Salle. Every time Mandy and I find ourselves on Taft Avenue, I always joke na kinakati ako due to allergies,” Mon says with a laugh.

Mandy’s level-headedness has made Mon mellow. As he admits, Mandy has “tamed” him.

As sports photographers, they are not allowed to show allegiance to their respective alma maters. Mandy is friends with the Blue Eagles, and Mon is chummy with several Green Archers.

But the rivalry has intensified, spilling over to the volleyball wars. Now it has become a spectacle that even non-

Emotions and tensions will run high when blue and green collide. This Sunday, the Ateneo and La Salle volleyball teams meet in what could be the hottest match of the season.