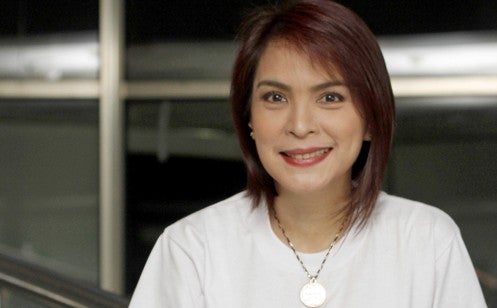 SINGER AT TWOPAPAL EVENTS Jamie Rivera will sing the theme song for Pope Francis’ visit, “We Are All God’s Children,” at themeeting with families on Jan. 16 at Mall of Asia Arena and the gathering for the youth at the University of Santo Tomas on Jan. 18. INQSnap this page for more content. ALANAH TORRALBA

Jamie Rivera to sing own composition at 2 papal visit events

MANILA, Philippines–Performing the theme song for Pope Francis’ visit on two official events gives singer-songwriter Jamie Rivera no assurance that she will get anywhere near the Pontiff.

But whether or not she does, merely singing in his presence—at the meeting with families on Friday at Mall of Asia Arena and the gathering for the youth at the University of Santo Tomas on Jan. 18—is good enough for her.

In both programs, Rivera will sing “We Are All God’s Children,” which she wrote, with music by friend and frequent collaborator Noel Espenida.

In a visit to the Inquirer head office in Makati City on Monday, Rivera, in a simple white tee shirt on which the title of the song was printed, spoke enthusiastically about her “most important work to date,” and even sang parts of it a cappella.

The message, she said, echoes that of the Pope’s Philippine tour: solidarity with the poor, mercy and compassion for the weak.

In May last year, when she learned of the visit, the singer, best-known of late for inspirational songs, got in touch with the Catholic Bishops’ Conference of the Philippines (CBCP) president, Archbishop Socrates Villegas, and volunteered to compose a song for the occasion.

“It was a long shot,” Rivera said. “He was actually surprised but he liked the idea and said it would have to be approved by the Vatican. He gave me a deadline, June 25, and suggested that I also make a video with actions that would go with the song.”

Rivera, who wrote the official hymn for St. Pedro Calungsod’s canonization in 2012, buckled down to work.

Hit in the gut

She did extensive research for two weeks, perusing prayer books and the Bible, watching YouTube videos. She revisited her old devotional songs. Nothing came out of any of that.

One day, on a drive to Greenhills in San Juan City, the first few lines of the song came to her.

“Seeing children begging, digging in trash bins for food and sleeping on the sidewalks—I had seen it all before but only then was I hit in the gut.”

The result was this whole stanza: “Do you see these children on the streets / Have you walked the pavements where they sleep / Do you feel their hands when you give them alms?”

Soon after came the rest of the lyrics.

‘Do not be blind’

Rivera remembered that the Pope would be flying to Leyte to celebrate Mass and have lunch with survivors of Supertyphoon “Yolanda” (international name: Haiyan).

“I was sure his aim was to comfort them. I wrote: ‘Do you hear the wind of the raging storm? Can you tell them where it’s coming from? Have you seen their homes washed by the floods / While a mother tightly holds her child?’”

The third stanza is an appeal to government officials, she said: “Please do not be blind and just leave them behind to struggle in darkness, or give them empty promises.”

Rivera, 48, explained: “One of the worst things you can give people in need is false hope. The elections are looming once again; soon we will be hearing lots of promises.”

She couldn’t have finished the song “without Divine Providence,” Rivera said. “I’m grateful to have found the right words.”

For fine-tuning, she sought the help of her brother, Jun Cruz, executive director of the charismatic community Ligaya ng Panginoon. Then she handed the lyrics over to Espenida.

“I hope students and children will perform them as I sing,” said Rivera.

After going back and forth with Villegas for a few more tweaks to the song, she received the good news in July.

“I was told that the Vatican had given its approval,” Rivera, a professed Catholic, said. “I was so happy I couldn’t think straight. Father (Villegas) said he was told that the simplicity of the melody, lyrics and moves, was what got the song approved; and that the Pope would be happy about it for sure.”

Rivera has been writing inspirational songs for years, but not all of them have been released or recorded.

“We Are All God’s Children” is the carrier single of her latest CD, published by Star Music, which was recently certified gold (7,500 copies sold).

Asked what the profit from CD sales was earmarked for, Rivera said it was still being discussed. “But part of the profit from sales of these (‘We Are All God’s Children’) shirts will go to the CBCP.”

Technically, this is the second time Rivera has been tasked to sing for a Pope. As part of the World Meeting of Families in 2003, Rivera, with Celeste Legaspi and the Apo Hiking Society, sang “Only Selfless Love” in different languages at the Rizal Park.

Their performance was viewed by the late Pope John Paul II in Rome, through live streaming. “He was supposed to come to Manila but was already too weak to travel,” Rivera said.

Of course, she would love to meet the Pope up close this time around, but she’s “not assuming” anything. On the off chance that she is favored, however, Rivera said, “I would thank him for visiting and tell him we’re all praying for him, too. In the CD there’s this other song for him, ‘Papa Franciso, Mabuhay Po Kayo.’”

Rivera, who rose to popularity as a pop singer in the 1980s, considers playing Kim in the West End production of “Miss Saigon” in the early 1990s as the highlight of her career.

That could change this week.

“This is a once-in-a-lifetime opportunity, and I’m giving each of these performances my very best shot.” Her small team has been doing the rounds of churches, too, teaching people “We Are All God’s Children.”

“It’s surprising that some church communities are not aware of the song,” Rivera said. “We’d love for as many people as possible to participate in the performances.”

She’s got butterflies in her stomach, that’s for sure. “I’m worried about forgetting the words,” she told the Inquirer, laughing.

But what she’s going to wear has been decided weeks ago: A barong suit at the Arena and a Filipiniana dress at UST, both by designer Rene Salud, and both simple enough to remind everyone who the star of the moment is.

Rivera admitted that she considered retiring from show biz at around the year 2000, when projects started dwindling. Then “The Jubilee Song” fell on her lap, followed by other uplifting songs, such as “Tanging Yaman,” “Only Selfless Love” and “Heal Our Land.”

And she was off on her career as “Inspirational Diva”—a tag that she still finds amusing.

To deny that “We Are All God’s Children” has put her right back in the public consciousness would be hypocrisy, Rivera said.

“One way or another, people are remembering me again … After this, I’m not sure. But I’m happy now, just getting this one song across.”