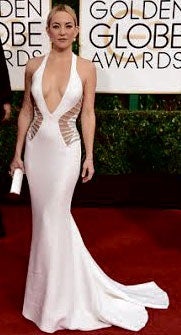 Gowns at the Golden Globes: Class triumphs over crass

Flying above the Golden Globes pre-show media gauntlet was the first-ever red-carpet drone to zero in on the fashions that celebs and movie stars were navigating that night.

Even as technology advances, for the movie industry and its many awards nights, choosing what designer look to wear is still a hand-in-hand decision between stylist and star.

So, in the drone footage, the clear color choices were black, white and red all over.

These are the most dramatic colors, and the best choices for stand-out style were severe and singular sheaths that were instantly baptized as Best Dressed by impolite social media.

But in the Twitter universe, Kate Hudson’s plunging white column with strategic cutouts by Atelier Versace proved, without a doubt, at least in Hollywood, sexy is a blockbuster.

To avoid the backlash of bashers on the Internet, movie stars chose the better-safe-than-sorry route when deciding on simple yet strong gowns. Look at Lupita Nyong’o.  Last year’s “It” Girl was this year’s Gone Girl, wearing an overdone printed purple Giambattista Valli. Even Keira Knightley, with a baby bump in Chanel couture, was a fashion mistake. Shoot the stylist of poor Rosamund Pike, who just gave birth a month ago and was made to wear a too-revealing white Vera Wang chiffon gown, postpartum body laid bare.

Modesty was ablaze, and there was definitely a touch of class triumphant over crass. But don’t call it minimal; the wardrobe winners played a mean game of subtle subtraction, balancing the Spartan designs with blinding white diamonds.

Hair was down, the best look recalling Veronica Lake’s one-sided wavy style, or  swept in a casual ponytail. Eye makeup was smokey and romantic, while lips were pale or marsala, the maroon color of the year.

There was the absence of evening bags, and shoes were evening pumps for both men and women in patent leather. Nails were in dark shades of Goth. Other trending colors were shades of gray from platinum to silver to pewter, worn by Julianne Moore. There were a few yolk yellow gowns, as well, the best on Naomi Watts.

There were some delightful game changers. Emma Stone in a Lanvin jumpsuit looked elegant yet laid-back, while Jennifer Lopez appeared like a transvestite.

But Conchita Wurst was deemed Worst Dressed No. 1 in Gaultier couture. In the wake of falling stars failing to make the cut because of wrong choices for awards-night fashion, is it truly wise to simplify and distill? Maybe less is forever more.